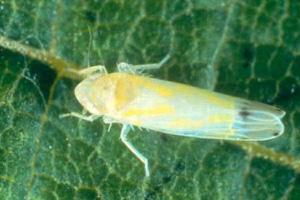 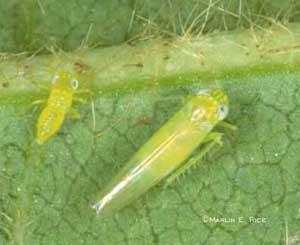 Adult grape leafhoppers are pale yellow, with red markings on the wings. They are about 1/8 of an inch in length and somewhat wedge-shaped. Immature forms are pale green or greenish-white and lack the markings and wings of the adult. This insect becomes active about the time grape leaves are half-extended. 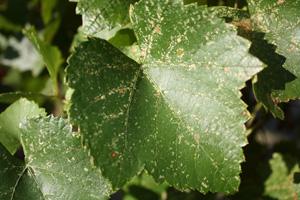 Adults and nymphs feed on leaves by puncturing the leaf cells and sucking out the contents. Each puncture causes a white blotch to appear on the leaf. Feeding causes leaves and fruit to appear stippled with many tiny white spots. Eventually, these spots turn brown and may cause leaves to drop prematurely. Leaves may become pale yellow in color and assume a sickly appearance. Feeding by leafhoppers may reduce the photosynthetic capacity of the plant, and the quality and quantity of the fruit may be affected. Nymphs and flying adults may be noticeable on the undersides of leaves. Some species are a vector for Pierce’s disease. Certain cultivars of grapes are more susceptible to damage from this pest than others. Wine and table grapes are generally more susceptible, particularly those that mature later in the season.

Leafhoppers are best controlled when they are in the immature stages (nymphs), so begin scouting about ten days after bloom, particularly if leaf stippling is already present. To scout, first look for symptoms of damage (stippling), then check a minimum of three leaves from each of 15 vines and calculate the percentage of leaves with nymphs present. If more than 60 percent of the leaves are infested with more than five nymphs per leaf at veraison, then treatment is justified. After veraison, 80 percent of the leaves with more than ten nymphs per leaf should be used as an economic threshold.

Grape leafhopper is a pest that lends itself well to biological or mechanical control methods. You can use green lacewing(predatory) nymphs. Place 3,000 to 8,000 lacewing eggs per acre in the vineyard to control leafhoppers. You can achieve some control by pulling off the basal leaves after egg-laying activity but before nymphs reach the fifth instar (near berry set).

Several organic alternatives are available for controlling this pest. Use diatomaceous earth laced with pyrethins, or a one to two percent solution of M-Pede with 1 quart of natural oil, or apply Surround® WP throughout the critical period to deter feeding.

Several traditional insecticide choices are available. In areas with heavy leafhopper populations, you might want to use systemic materials (e.g., imidacloprid) rather than contact insecticides. Control broadleaf weeds and grasses during May and June, when leafhoppers move into vineyards, to help reduce populations of these pests.

Grape leafhoppers overwinter as adults in wooded or littered areas and emerge in May to begin feeding on the undersides of leaves. Adult leafhoppers are highly mobile and are easy to overlook, even by the trained eye. Several leafhopper species can be found in vineyards. The eastern grape leafhopper (E. comes) adult is a mottled white color with yellow stripes and only about 1/8-inch long. The nymphal stage is much smaller and nearly transparent green in color. Another common species present is the potato leafhopper (Empoasca fabae). This species prefers to feed on leguminous plants (e.g., alfalfa, peanut); however, they will also move to grapes if they are located nearby. Potato leafhoppers do not overwinter in colder regions, but migrate in from the Gulf States. By mid-May adult leafhoppers begin inserting eggs under the leaf epidermis, and by late May, first generation nymphs will be present for a 20- to 30-day period. Three to five generations of leafhoppers can be found in the southern plains, and these populations and various species may overlap.