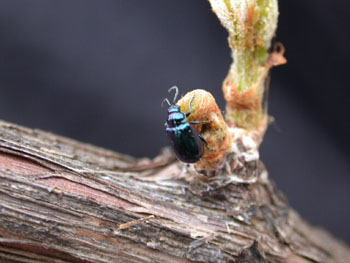 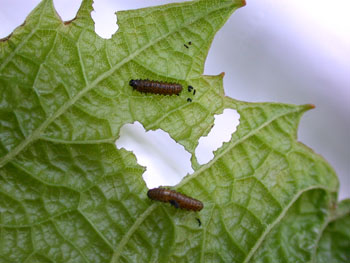 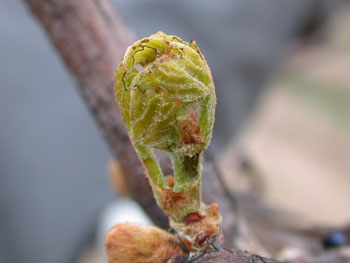 In the spring, adults feed directly on buds, hollowing them out during the daylight hours from bud swell to 1/2-inch shoot growth. Once the buds reach 1/2-inch in size, beetles cannot cause significant damage. Later in the season, larvae will feed on the foliage and flower clusters but this damage is rarely of economic importance. In areas where climbing cutworms are present, pay close attention while scouting as the damage of these two pests is similar. Generally, larvae are not the greatest concern because management should be concentrated on the bud-damaging adult stage. Grape flea beetles are a metallic blue green color and about 1/4-inch long.

Grape flea beetle is considered to be a secondary pest of grapes, but as a bud feeder it has the capability to do significant economic damage if left unchecked. Scouting is especially critical to catch this sporadic pest in years with damaging populations. Repeated scouting may be required in years where weather conditions keep buds in the susceptible stages (bud swell to 1/2-inch shoot growth. Inspect buds early in the season during bud swell. If damage has occurred in the past, check those areas of the vineyard first. Check 100 vines and record the number of hits. Apply insecticide in areas where more than 4 percent of the new buds are damaged. This damage threshold can be adjusted according to variety and training system. The 4 percent damage threshold has been used in balanced pruned ‘Concord’ vines and adjusted for higher or lower bud number according to variety and training system.

The grape flea beetle is often a sporadic pest of grapes during the early growing season in most growing areas. There is only one generation per year; however, if overwintering sites (woodlands) for this insect are common nearby, then large infestations can occur. Significant damage typically occurs only in years where the weather conditions keep bud development in the susceptible stages.