All green tissues of the grapevine are susceptible to powdery mildew (Erysiphe necator (Schw.) Burr.) infection. The disease appears as a whitish-gray powdery coating on the leaves or fruit caused by fungal mycelium and conidia on the surface of the plant. On leaves, initial symptoms appear as chlorotic spots on the upper leaf surface that soon become whitish lesions. Late in the season, small black round structures (chasmothecia) begin to appear on the white powdery lesions. On shoots, infected areas have the appearance of brown/black diffuse patches; on dormant canes, these patches are reddish brown. Severe leaf infections can cause distortion, drying, and premature drop. Infected berries can become covered with the fungus, may turn dark brown, shrivel, and split, and/or may not ripen properly. Berry infection may lead to further infection by spoilage microorganisms that reduce the quality of wine, even if the powdery mildew infection is mild. 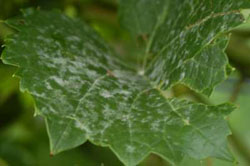 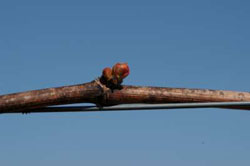 Disease development is strongly favored by high humidity and cloudy weather, in addition to relatively warm temperatures. Therefore, pruning and training practices that promote an open canopy with good air circulation and light penetration can reduce the favorable conditions for powdery mildew development. Selection of an open planting site with rows in the direction of the prevailing wind and direct sunlight will also promote air circulation and decrease shading. These cultural methods may not only decrease the incidence and severity of the disease, but also promote thorough fungicide spray coverage.

For effective management of powdery mildew, fungicide sprays may be needed early in the growing season for highly susceptible cultivars and when disease pressure from the previous year is high. Fungal spores (ascospores) are released from overwintering sites (chasmothecia) on the bark of the vine, from bud break until shortly after bloom when it is rainy and temperatures are above 50ºF. However, additional spores (conidia) produced in lesions continue to be spread throughout the season by wind. The most critical time to manage fruit infection with fungicides is immediately before bloom through two to four weeks after bloom. It is important to remember powdery mildew can be a problem during dry growing seasons because fungal spores (conidia) can be disseminated by wind and cause infections with high humidity alone and do not require rain for release or infection. Chemical management of powdery mildew should take into consideration disease resistance to fungicides. Refer to a grape pest management guide (see Recommended Links) for fungicide specifics and efficacy information.

Powdery mildew is caused by a fungus, Erysiphe necator (Schw.) Burr., which is native to eastern North America. The fungus overwinters as tiny black fruiting bodies (chasmothecia) in bark crevices on the grapevine. Spores (ascospores) from overwintering sites are initially released with 0.1 inch of rain when temperatures are 50ºF. These spores are carried by the wind and cause primary infections. Primary infections develop into lesions which produce another type of spore (conidia) that, within six to eight days, result in the powdery or dusty appearance of the lesions. These conidia cause secondary infections throughout the remainder of the growing season and result in the exponential spread of the disease throughout a vineyard. Infection can occur during temperatures of 59ºF to 90ºF, but temperatures from 68ºF to 77ºF are ideal. High relative humidity is conducive for conidia production and rainfall actually negatively impacts spore production (which is the opposite from other grape diseases caused by fungi). Overwintering structures (chasmothecia) are formed in the fall and are washed into the crevices of the bark on the vine trunk where they will remain and release ascospores during the start of the next growing season.