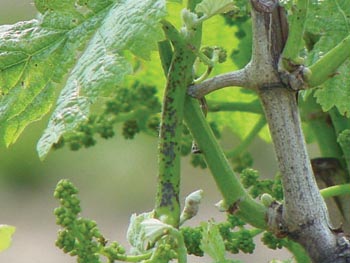 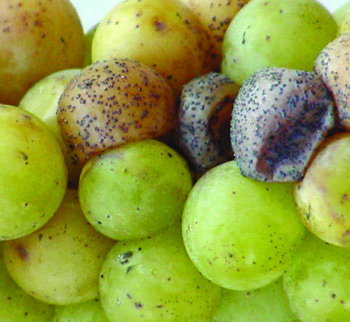 Initial lesions are typically black and somewhat elliptical. Lesions on leaves will be circular, while lesions on petioles will be more elongate. Infected fruit will turn brown and become soft and shriveled. Small black pepper-like fungal fruiting bodies will cover the shriveled fruit. Symptoms of Phomopsis can occur on all green portions of the vine.

Sanitation is extremely important to eliminate the primary source of spores for new infections, which are found on old plant tissue. Proper dormant pruning and destruction of canes, clusters, and other plant parts can significantly reduce the number of spores. Also, canopy management during the season can help to increase airflow, which reduces free moisture and humidity within the canopy. Practices such as shoot positioning and strategic leaf pruning can reduce drying time.

Phomopsis cane and leaf spot, caused by the fungus Phomopsis viticola, was once referred to as “dead arm” until the description of Eutypa dieback was widely accepted as the cause of that disease. The disease is favored by extremely wet weather and cool-to-moderate temperatures (59ºF to 68ºF). When prolonged rainy periods exist in the spring and provide at least six hours of continuous wetness, especially during bloom and fruit set, Phomopsis is likely to occur.

Phomopsis overwinters in bark as dormant mycelium or fruiting structures (pycnidia). In spring, fruiting bodies will mature and erupt from canes, petioles, and other dead plant matter. During rainy periods, spores ooze from the fruiting bodies and are splashed or carried by rainwater to shoot tips. While optimal temperatures for disease development are quite moderate, the fungus has the capability to grow and infect across a broad spectrum of temperatures (34ºF to 99ºF). If weather during the summer turns hot and dry, the fungus can go dormant and resume growth once favorable conditions return in the fall months.