Jim Wolpert and Andy Walker, University of California, Davis
Adapted from a three-part article that appeared in American Vineyard magazine, April, May and June, 1996.

The foundation of a good vineyard is the grapevine planting material with which it is established. This article outlines the different types of plant materials that are available to growers, and the advantages and disadvantages of each type.

Cuttings are made from nursery mother vines in fall. When cuttings are made, they are often cut flat on the bottom (perpendicular to the long axis of the cutting) and angled at the top in order to prevent inadvertent inversion of the cuttings later in the propagation process. Cuttings are disbudded except for the top bud in order to discourage roots that would otherwise originate from those shallower node positions. Only roots from the basal end of the cuttings are desired; if roots do arise from these upper positions, they are removed during trimming. After some time in a warm callusing room to promote root initiation, cuttings are planted in the field in spring in closely spaced nursery rows for a growing season. They are dug in fall, trimmed to retain only a few inches of top growth and roots, bundled (usually 50 vines per bundle) and stored in a cold room. During the bundling process, plants are divided according to grade (see Quality Guidelines), and poor plants are culled.

Green-growing benchgrafts. A benchgraft is made by joining a dormant, disbudded rootstock cutting and a one-bud scion piece by means of a bench-top grafting machine. In the grafting process, the single rootstock bud that was retained during disbudding is removed and replaced with the scion bud. Various models of benchgrafting machines create different shape graft unions (e.g., saw cut or Omega); however, the shape of the union is not important. The success of a benchgraft is dependent on careful matching of the diameters of scion and rootstock pieces so the cambium regions of both pieces are properly aligned. Favorable post-grafting environmental conditions promote callusing and successful uniting of the two pieces of wood.

An Omega cutter (L) and benchgraft. Photos by Mercy Olmstead, University of Florida. 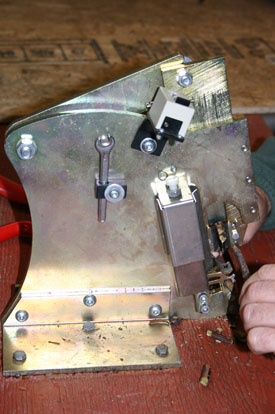 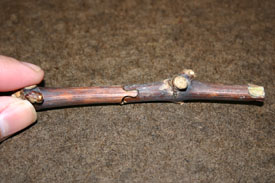 Grafting is usually done from January through April in the northern hemisphere. Grafted units are placed in a callusing room (warm, humid conditions) to encourage root initiation and graft union healing, after which vines are removed and dipped in wax (the entire scion and the upper portion of the rootstock) to prevent desiccation. The vines are then planted in open-bottomed sleeves or pots and placed in a greenhouse for growth under controlled conditions. The wax layer is designed so the developing shoot will break through when growth commences. After sufficient growth, the plants are moved outside to be acclimated to field-like conditions and at that point are ready for delivery. Because these vines are actively growing, close attention must be paid to transport, pre-plant, and post-plant conditions in order to avoid excessive heat and desiccation. The irrigation system must be installed before planting can commence. Some type of cardboard carton or grow tube is usually used on the above-ground part of the vine to protect the leaves from direct sun.

Green-growing benchgrafts have increased in popularity in the last decade because they have a much shorter lead time. Only four to five months are required between ordering and delivery, assuming that a nursery has the desired dormant rootstock and scion cuttings available for grafting. Decisions can even be made well into the growing season. However, growers should be wary of agreeing to accept green-growing plants in summer. Green-growing vines with some leaf area but very small root systems are not robust, and periods of prolonged hot weather can cause considerable damage to, or even kill, these young plants.

Dormant Benchgrafts. These plants start out the same as green-growing benchgrafts but instead of being potted, they are planted directly into a nursery row where they grow for a full growing season. Like rootings, they are dug in fall, sorted, trimmed, graded, bundled, and stored for subsequent delivery in spring. Unlike green-growing benchgrafts, dormant plants, as their name implies, are not growing when delivered, and therefore have greater stored reserves and are much hardier.

Dormant benchgrafts require the most lead time by the grower. Cuttings will need to be made about 18 months prior to delivery of dormant planting stock. It is possible that a nursery may propagate rootings or benchgrafts in anticipation of future orders but, in this era of highly specialized requests, it is unlikely that a grower will find the exact rootstock-scion-clone combination is available in adequate numbers. In this case, prior planning is key.

If dormant benchgrafts are not available, growers can use rooted cuttings of the desired rootstock because it is more likely nurseries will have them. Rootings planted in spring are typically large enough for field budding the following fall with the desired scion variety and clone. While this scenario is more likely on short notice, a grower wanting assurance of availability of planting material is advised to place nursery orders well in advance.