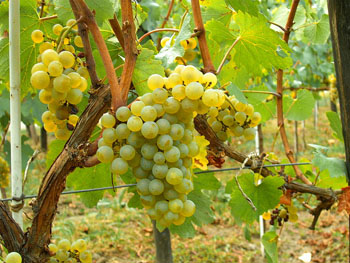 Chardonnay is one of the leading white grape varieties in the world for production of high-quality white and sparkling table wines, due to its versatility in producing different wine styles. It may be the most widely planted vinifera grape in the eastern U.S. The variety probably originated from the Burgundy region of France. The name “Chardonnay” has been linked to a village in the Mâcon region and is derived from Cardonnacum, which means “a place of chardons or thistles.”

Breaks bud early in the season and is also early for harvest. It has early and reliable wood maturity and moderate vigor. It is cold hardy, but not as hardy as Riesling or Cabernet franc. Tolerates mild winters well, but is often damaged by early frosts and is susceptible to many diseases, including relatively high to Botrytis bunch rot, so the use of vertical training combined with summer pruning and leaf removal have often produced superior results.

Not recommended due to early budbreak in the spring. Although a decent secondary crop may be had if the primary crop is lost, repeated damage over years will weaken vines, and in some cases, render them unsuitable for continued fruit production.

Chardonnay is the most widely planted Vitis vinifera variety in New York. Relative to other V. vinifera varieties, it is cold hardy, but not so hardy as White Riesling or Cabernet franc. Of the several clones tested at Geneva, we have found the locally available New York clone to be superior to those from Foundation Plant Materials Service of California. Those clones tend to set excessive crops of very compact clusters which rot easily and do not ripen reliably. Their vegetative growth is excessive and winter cold injury often is the result.

The number one vinifera variety in North Carolina. Chardonnay is a dependable, high quality white grape. It has performed well in all areas of the state where vinifera can be successfully grown, from the mountains to the piedmont. Several clones are available. Chardonnay starts the season early, in terms of both growth and harvest. It is the first variety to break bud and one of the first to be harvested, usually starting in mid- to late August in the piedmont. Demand is good for high quality grapes and wines. Its strengths are its high quality and utility, and good yields. Weaknesses include early budbreak, which make it susceptible to frost damage, susceptibility to many diseases (including mildew) and cold injury. Proper site selection is critical to minimize spring frost damage. Vines are generally vigorous, so consider a divided canopy training system such as the Lyre or Smart-Dyson.

This is the most abundant variety in Virginia and accounts for about 30 percent of the state’s commercial grape acreage. Chardonnay is planted in areas as geographically diverse as the eastern shore, the rolling hills of the piedmont, and the higher elevations along the Blue Ridge Mountains. The fruit ripens about the first week of September in central and eastern areas of Virginia and about one month later at the coolest locations at higher elevations.

STRENGTHS. The winery demand for high quality Chardonnay fruit is currently robust and reflects a similar demand among wine consumers for varietal Chardonnay wines. Chardonnay offers good yields and fruit quality when properly managed. Yields of 3 to 5 tons of high-quality fruit per acre have been achieved consistently by competent growers in good years. Conversion of nondivided canopy training systems to open-lyre, divided canopy training has increased yields without sacrificing fruit quality. Divided canopy training or wide, in-row vine spacing (for example, 8 to 12 feet) should be considered where experience, soil conditions, and moisture availability (especially with irrigation) suggest that vigorous vegetative growth is apt to occur. Vines that consistently produce more than of 0.4 pound of cane prunings per foot of canopy are considered excessively vigorous. Chardonnay has fair to good cold hardiness. None of the common V. vinifera varieties possess the cold hardiness of the hybrid or native American varieties. However, there is a range of cold hardiness among the vinifera varieties, and Chardonnay is among the most hardy of those commonly grown in this region.

WEAKNESSES. Chardonnay is one of the first vines to break bud in the spring. Hence, it is subject to occasional frost injury if planted in frost-prone sites. Avoid frost through prudent [[site selection] or choose a variety that breaks bud later. Botrytis and other bunch rots can reduce yields in wet years and can be severe when fruit is allowed to develop in dense, shaded canopies. As with other grafted grapevines, Chardonnay often produces an excessive amount of vegetation for conventional training systems to expose to sunlight. Remedial canopy management practices that improve fruit zone ventilation and exposure will reduce the incidence of rot. Those practices vary with training system but include summer hedging of shoot tops, selective removal of shading foliage from fruit zones, and conversion of nondivided canopy training systems to a divided canopy system. Grape berry moth infestations can aggravate bunch rot problems and must be controlled.

In California, there are references to Chardonnay being grown in the late 1800s. Plantings remained limited due to Chardonnay’s low fruit yields compared to the higher-yielding varieties grown at that time. During prohibition, most Chardonnay vineyards were uprooted in favor of varieties that could withstand shipment to the East Coast. After prohibition, two surviving Chardonnay vineyards were the Wente Vineyard in Livermore and Paul Masson’s La Cresta Vineyard in the Santa Cruz Mountains. These vineyards are believed to represent different introductions of Chardonnay into California. Budwood collected from the Wente Vineyard has been a major source for the expansion of Chardonnay acreage in the state. In 1960, it was estimated that only 150 acres of Chardonnay existed in California. By 2000, there were 103,491 acres reported, making it the state’s most widely planted wine grape variety.

Chardonnay is one of the first varieties to begin growth in the spring, which makes vines more susceptible to frost injury. Crop recovery from regrowth is usually small. In years when cool bloom temperatures occur, a high percentage of seedless shot berries can occur. Early maturity makes the fruit attractive to birds and significant fruit loss can occur.