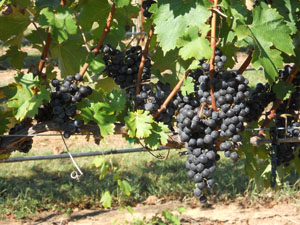 The main variety of many of the great wines of Bordeaux in southwest France and in the Languedoc area of southern France, this is also one of the most cold hardy and disease-resistant Vitis vinifera varieties. It makes a high quality dry wine, and is in high demand for premium wine production. It is also grown in eastern Europe, Australia, Chile, Argentina, California, Washington and Texas. Cabernet Sauvignon was shown to be a cross between Cabernet franc and Sauvignon blanc.

Cabernet Sauvignon is used exclusively for high-quality to middle-quality, dry table wines. Small amounts may be blended into Merlot or Cabernet franc wines to provide more tannin structure. Grapes grown in areas too cool for the variety can develop a highly undesirable herbaceous or “green bell pepper” aroma in very shaded conditions. In areas too warm for the variety, fruit will not develop normal varietal character.

Highly vigorous, especially on a rootstock, and relatively easy to grow. Harvest is later in the season. One of the most cold hardy and disease resistant Vitis vinifera varieties. Later budbreak, so it is less susceptible to frost injury. Vines are high-yielding when properly managed, and fruit is more resistant to rots. Several clones are available. Its weaknesses include susceptibility to winter injury and crown gall and excessive vegetative growth.

Cabernet Sauvignon often produces blind buds, typically in the mid-cane region, nodes 6 through 10 on a 12-node cane. This is a particular problem in the training phase when long canes are laid out on the fruiting wire to become cordons. Blind buds on those canes preclude normal spacing of spurs. Latent shoot production is prodigious, and shoot thinning removes unwanted shoots at the base of two-node spurs or at the head of cane-pruned vines.

Most widely grown red cultivar in Texas and Oklahoma. Has late budbreak, so it avoids many frost events in the spring.

In Indiana, it ripens late and satisfactory sugar concentration (Brix) is rarely attained. Sugar alone does not determine wine quality, but consistently good wines can be produced only in the warmer production areas in Indiana. In shorter season areas, a “green bell pepper” aroma dominates the typical varietal character of the wines.

Although late ripening, satisfactory levels of sugar in most New York production areas are usually attained. Consistent superior wine quality has only been achieved in the warmer production areas.

The number two vinifera variety in North Carolina, Cabernet Sauvignon is the leading red vinifera. It has performed well in all vinifera areas of North Carolina. It has a late season harvest date, ripening in mid- to late-September. Avoid planting in lower areas where winter injury may occur. It should be planted on wider (8-foot) in-row spacings and/or trained on a divided canopy trellis, such as the Lyre, especially if more vigorous rootstocks are used. Excessive vegetative growth dictates more canopy management to avoid fruit quality problems.

About 15 percent of Virginia grape acreage is planted to Cabernet Sauvignon. One of the latest maturing varieties, fruit is harvested two to three weeks after Chardonnay.

STRENGTHS. The demand by wineries for high-quality Cabernet Sauvignon fruit for use in making varietal wine is currently robust and is expected to remain strong. Bud break with Cabernet Sauvignon occurs about 10 to 14 days after Chardonnay, reducing the likelihood of frost injury. This variety produces good yields if properly managed; yields of 3 to 5 tons per acre are not uncommon with well-managed vineyards. As with Chardonnay, divided canopy training systems or wide in-row vine spacing should be seriously considered to accommodate growth and increase fruit yields. Fruit is decidedly more resistant to cracking and rots than many other commonly grown varieties.

WEAKNESSES. Cabernet Sauvignon is perhaps the most vigorous variety commercially grown in this region, often resulting in excessive vegetative growth. This high vigor, if not managed, can cause canopy shading and related problems with fruit quality (poor fruit pigmentation, high pH, and reduced varietal aroma). Research from other viticultural areas and experience in Virginia suggest that canopy management practices such as summer hedging, selective leaf removal, and canopy division are appropriate means of dealing with excess vegetation in existing vineyards.

Cabernet Sauvignon is susceptible to winter cold injury. The dormant buds and wood (trunks, arms, and canes) can be injured by temperatures that normally do not harm Chardonnay or Riesling vines. For this reason, Cabernet Sauvignon should be planted only on excellent sites where temperatures rarely drop below –5ºF.

Bunch stem necrosis can reduce yields. This form of necrosis is a poorly understood disorder that may occur around the time of bloom (in which case it is called early bunch stem necrosis) or in late summer as the fruit begins to mature. The disorder is not unique to this region. Late-season bunch stem necrosis has been observed widely and frequently in Virginia. Conditions that apparently promote the disease include extremes of moisture, high humidity, overcropping, excessive vine vigor, and poor vine nutrition. Partial control has been claimed in some viticultural regions by foliar applications of magnesium sulfate, directed at the clusters, during mid- to late summer. Still other researchers have found evidence that the disorder may be aggravated by accumulation of toxic, nitrogenous products in the affected tissue. Aside from ensuring optimal mineral nutrition, growers should explore options for limiting shoot vigor, vegetative growth, and fruit zone humidity. Those options are consistent with planting densities and training systems that permit more shoots per root system without increasing shoot density per unit length of canopy.

On the West Coast

Grown widely in California and Washington. In California, the variety has increased dramatically in the past 20 years in moderately warm regions, especially in high Winkler Region II to high Region III, such as central Napa Valley, as well as in Region IV, such as Lodi in the northern San Joaquin Valley.