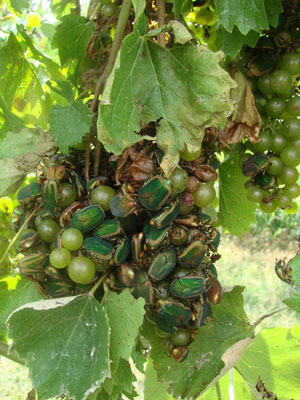 Green June beetle (Cotinis nitida Linnaeus), is a serious pest most commonly found in southern vineyards, although this native beetle can be found from Connecticut south to Florida and as far west as Texas and Oklahoma. The beetle causes direct injury by feeding on the fruits of numerous crops including grapes, apple, pear, quince, plum, apricot, peach, nectarine, blackberry, and raspberry. Green June beetles are attracted to ripening grape clusters as sugar content increases and fruits soften, but they are known to feed on unripe berries as well. Because beetle populations fluctuate from year to year, damage to fruit may be negligible in some years but significant in others. Large populations of green June beetles can be found on maturing bunch grapes (Figure 1). In a typical year, feeding damage will be concentrated in specific areas of the vineyard. To determine if treatment is necessary, scout the entire vineyard and look for infested clusters. In many cases, spot applications of a labeled contact insecticide may be appropriate. A provisional treatment threshold of 1 percent damaged clusters can be used for higher-valued wine grape varieties and can be adjusted upward for other varieties using final market price as a guide. Depending on the location of the vineyard, adults can emerge from early July to August, so repeated scouting may be necessary.

The adult green June beetle is ¾ to 1 inch long and ½ inch wide. Color varies from dull brown with irregular stripes of green to uniform velvet green. The margins of the body range from light brown to orange-yellow. The underside is metallic greenish or yellow. The larva is a typical white grub, measuring about 2 inches long when fully grown, and is easily recognized by its habit of crawling on its back. The larvae overwinter in the soil. Sandy soils high in humus or organic matter are preferred. In the spring, they tunnel near the soil surface and pupate in June. The adults emerge in July and August. 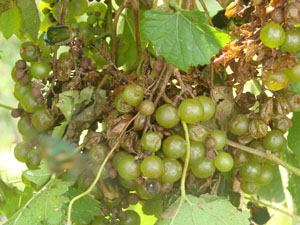 Beetles gain entry into undamaged fruits by gouging with the horn on the front of the head, then feed on the flesh of the fruit. Several beetles may bury themselves entirely in a ripe peach. Their odor and excrement ruins most pieces of fruit they visit even if feeding damage is not severe. In years with severe infestations, the direct feeding damage of this pest can leave behind completely dried up grape clusters (Figure 2).