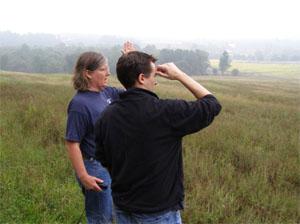 Every decision made during the establishment and life of a vineyard will be based on site selection. Considerations include:

Elevation refers to either the elevation within a certain location (high point vs. low point) or to the absolute elevation (feet above sea level). Planting a vineyard on or near the highest point on any given location will promote better air and water drainage. Air drainage is essential in frost and freeze events. Cold air is heavier than warm air, so it settles in areas of low elevation. Water drainage is also important because standing water will limit the oxygen available to the vine root system. Even though grape vines are not particularly susceptible to damage from short-term flooding like some other fruit crops, standing water limits their growth by killing small fibrous roots that provide the majority of water and nutrient uptake from the soil.

The slope of a site refers to the degree of inclination of the land. A slight to moderate slope can be beneficial because it accelerates cold air drainage. Generally, the steeper the slope, the faster cold air moves downhill, if there are no barriers to air movement such as trees or berms. Air drainage is important for protection against spring frosts. Vegetation that slows or stops air drainage should be removed during site preparation because it can act as a dam and force cold air back up the slope.

Steep slopes can create problems. Machinery is difficult, if not dangerous, to operate on steep slopes, and the potential for soil erosion is increased. Slopes with greater than approximately 15 percent (a 15-foot drop in elevation for each 100-foot horizontal displacement) should be avoided. Consult your local Soil Conservation Service[1] office for advice on erosion control measures.

The aspect of a slope refers to the compass direction the slope faces (north, south, east, or west). Depending on the climate of your region, different slopes should be selected for the greatest benefit of vineyard production. In cool climates where summers are cool and growing degree days are low, northern slopes should be avoided and southern slopes (S, SE and SW) are preferred to allow maximum heat accumulation on that site to grow and ripen grapes. Generally, in areas like eastern Washington and western Idaho, vineyards are sited on south/southwest facing slopes. The best wines in Germany and the other cooler regions of Europe come from south/southwest facing slopes. The key in those situations is SLOPE and windmachines for frost control.

In climates with warm or hot summers and cold winters, eastern, northern, and northeastern slopes are preferred over southern and western exposures for several reasons:

Factors such as the presence of woods, steep slopes, and exposed rocks may dictate that a less preferable aspect is used. However, management costs can be reduced if you choose the correct site for grape production rather than dealing with less-than-ideal sites.

It is important to determine the history of crop cultivation of your land prior to planting. This is critical to determine if there are any concerns with soil modifications and pests/diseases:

Growers must keep in mind Pierce’s disease when choosing a site, especially if they are considering planting Vitis vinifera grapes. Pierce’sdisease.org offers current news and research on Pierce’s disease.

If you intend to have a winery at the vineyard location, public access needs to be a criterion for siting the vineyard, assuming that the other conditions are reasonably met.

Where to Plant a Vineyard: Climate