Vine balance can be defined as the condition in which:

Vine growth is a result of the complex interaction of soil, climate, rootstock capacity, scion capacity, vine density, trellis system, shoot density, and cultural practices. The first six factors are chosen at planting and cannot be easily changed without significant inputs, but the grower has control over shoot density and cultural practices to alter vine growth and production.

Recent research has suggested that shoot density (shoot number/meter), controlled at pruning, is a critical component in vine balance. The often recommended range in shoot density is about 12 to 15 shoots/meter of undivided canopy. If shoots are too dense, light in the fruiting zone is reduced, leading to reduced fruit quantity and/or quality. But if shoots are too sparse (on weak vines), fruit bearing surface (shoot number per hectare) is reduced and therefore potential yield is lost per unit of land and per vine.

Therefore, at a given shoot density (i.e., 12 to 15 shoots/m), shoot length depends on vine spacing, particularly the in-row vine spacing. Another way to look at this is as follows: to control shoot length in any given site/rootstock/scion combination, you must vary vine spacing. With a vigorous vine, increasing vine spacing increases shoot number per vine and shortens shoots, while for a weak vine, decreasing vine spacing decreases shoots per vine and lengthens shoots, allowing for a fuller canopy. This is an unusual way to think about vine spacing, but it illustrates the importance of planting time decision-making that growers must consider.

The difficulty, of course, is that a grower must have a prior knowledge of the successful integration of those complex factors to be assured of the proper amount of growth, meaning not too much or not too little. While growers in California have a great deal of experience making these decisions, more information would be valuable in this and other regions. 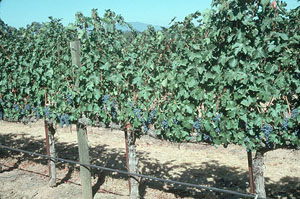 In a recent review, Italian researchers have laid out an excellent case, supported by ample research, that in-row vine spacing is a more critical decision than between-row vine spacing in terms of the resulting vine growth. In California, there are more instances of mistakes where vines are spaced too close than too far apart. VSP trellising and narrow-wheelbase farming equipment have allowed vine rows to be reduced from the traditional distance of 12 ft. to as close as 6 ft. As row spacing decreased, the tendency was for vine spacing to decrease as well, despite the fact these (in-row and between-row spacing) are two independent decisions.

The philosophy for closely spaced vines (in-row) is based on vine size capacity or competition. In general, closer spacing of vines should be done in vineyards where vine size is inherently small due to shallow soils, lack of soil moisture/irrigation, or fertility. Conversely, it is the belief that vines will compete for nutrients and water and that competition will regulate growth of more vigorous vines. Close spacing has been advocated on deep (>2m rooting), fertile, clay-loam, and valley-floor soils. Experience to date has been that these growers struggle to control vegetative growth. The trend towards close vine and row spacing has been used in Oregon’s Willamette Valley, where growers battle high vine vigor, even on hillsides, due to the deep soils and high soil moisture through late spring. Take care when choosing which rootstock and vine spacing to use, after site selection and desired scion are taken into account. Both experience and research to date indicate that closer is not always better for vine balance.

Where vineyards are already established and decisions have been made in vine spacing, growers must deal with the vine growth consequences. When growth is less than desired, remedies are relatively straightforward. As mentioned previously, shoot number can be regulated down by pruning, even lower than 12 shoots/meter to increase the length per shoot to fill the canopy of the vine. However, this is not ideal because it will reduce shoot number (and cluster number) per hectare and does not make full use of the space in the vineyard as there will be gaps between vine canopies. Cultural practices such as irrigation and fertilization also may be used to drive growth and should increase growth potential (shoots and fruit) and allow shoot number to remain at the ideal density. However, these inputs may be costly and usually come with some inefficiencies if required on a regular basis. 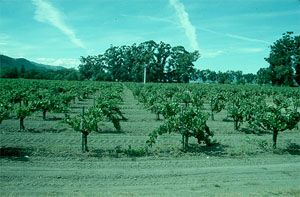 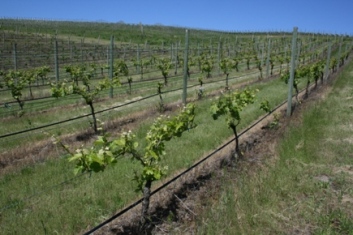 Gaps in the vineyard canopy between vines indicate improper vine spacing or management.

Conversely, where shoot growth is very high, there are limited options available to the grower to moderate vine balance. This is often a problem in regions with winter rains and high spring soil moisture and areas with fertile soils. As a result, vines reach excessive shoot growth early in the season before irrigation can be an effective tool in growth regulation, or where soil moisture and fertilization are not limiting enough to make these effective growth control tools. In sites where early irrigation and fertilization are practiced, those regimes should be moderated to reduce growth. Cover crops [1] have been shown to compete sufficiently well to slow down vine growth. In very high vigor sites, one of the few tools for vigor control includes a permanent grass cover crop between vine rows, which creates soil and/or nitrogen competition with vines. In some cases, where too high of vine density per acre is used on a site that proves to be high vigor, growers may choose to remove vines to allow more space for vines to grow and achieve balance. This is not a preferred method of management, but may be required. Changing to a different training system with multiple curtains also is not feasible in many high vigor, close spacing systems as the vine row spacing is too close and precludes the use of divided trellis/training systems. 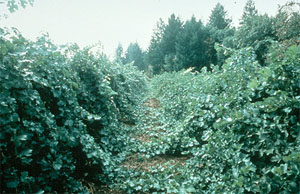 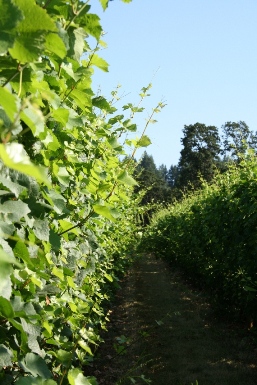 If vine growth is not reduced through competition of cover crops or through removal of vines, vines will have excessive growth, requiring increased canopy management costs. In some regions where high density plantings coincide with high vigor growth potential, there are significant canopy management costs in disbudding (shoot thinning), shoot positioning, hedging, lateral pulling, leaf pulling, removal of secondary crop, and crop thinning.

Shoot growth and vine balance are ideal when a vineyard is designed in such a way that integrates the important drivers of growth: site, rootstock, scion, vine spacing, and cultural practices. Be careful in hastily accepting vineyard design trends, and research any site and growing region thoroughly prior to determining vine spacing.