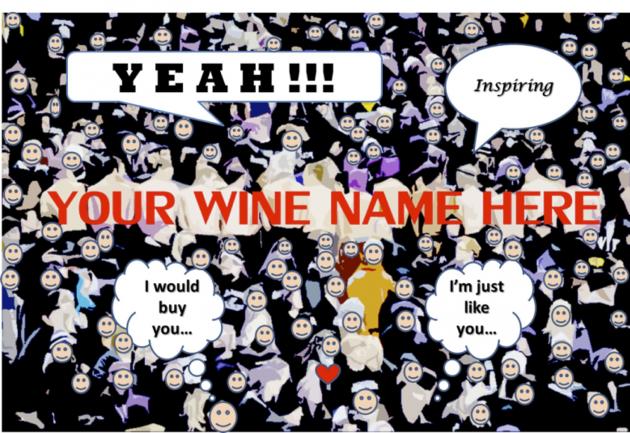 During the last 10 years the US wine market has become increasingly saturated, making it difficult to market a new winery or improve sales of an existing one. High barriers to entry, including significant upfront costs and high levels of competition, increase the importance of having a successful marketing campaign. In 2011, 5000 US wines received scores of 90+ from Wine Spectator and 125 wines from Napa Valley alone scored 95+ (McMilan 2012). It is clear that success can come from producing a high quality product, but with so many wines scoring in the 90s comes the realization that a winery needs to be more than simply a source of good wine to succeed.

Wine industry marketing strategies often differ from other industries because of the romantic and emotional ties that consumers have with wine and the wineries they visit. There are three keys to creating an effective and successful winery marketing campaign:

Visitors want to feel personally connected to the winery; they come to the winery to be taken on a romantic and fun journey and that’s how the relationship should be treated. Creating a relationship is vital to building repeat customers for life. 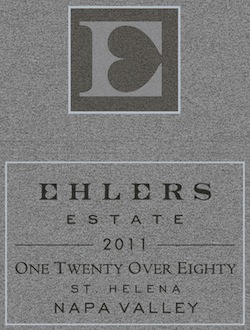 When creating a story, the key is to make your winery relatable to customers. Some wineries choose to stand behind charities or causes. For example, Ehlers Estate, an organic vineyard in St. Helena, CA, appeals to consumers interested in organic and sustainable production techniques. But Ehlers Estate also connects on another level; 100% of their proceeds go to the Leducq Foundation. Founded by Jean Leducq who purchased the Ehlers Estate in 2001, the Leducq Foundation raises money to donate to US and international universities to improve their cardiovascular research programs. Ehlers Estate has taken their dedication to cardiovascular research into the winery’s image and products. Their logo is a stylized ‘E’ with a heart on the inside. Ehlers has gone as far as to name a heart healthy Cabernet Sauvignon ‘One Twenty over Eighty’ or 120/80, the healthy human blood pressure. Heart disease and heart attacks are illnesses that hit close to home for a lot of consumers. Knowing that all of the proceeds from these wines support a cause that is important to them helps the consumer see the winery in a different light, and a relationship is potentially created.

Most wineries will not be able to donate all their proceeds to charity, but they can offer one or two wines tailored toward specific charities. Blanchard Family Wines in Sonoma County donates the proceeds from two wines to two different charities: ‘Red Scarf Red’ proceeds benefit Special Operations Warrior Foundation (co-owner James Blanchard is still an active duty Air Force helicopter pilot), while ‘Peoria Pink Girls’ proceeds go to Breast Cancer Awareness. A winery that links a wine to a great cause will draw in customers that are close to those charities.

3. Have an ongoing Internet presence, especially through social media outlets such as wine blogs, Facebook, and Twitter. According to the Wine Market Council’s annual consumer survey, the majority of wine drinkers get their wine information through the Internet; 65% of consumers who drink wine at least once a week, and 40% of those who drink wine less often, receive their wine information from the Internet (Vino California 2012). Clearly, an Internet presence is vital to marketing wineries.

Some of the oldest and most effective Internet content providers are wine blogs. But, in recent years, blogging has fallen prey to oversaturation of the topic area, and a lack of time and financial rewards to bloggers. Blogs are still a viable social media outlet for winery marketing (Wark 2012). The most successful wine blogs have a clear direction, good writing and a loyal following (Bacchus and Beery 2012). Wineries that partner with these bloggers can get reviews more easily than in print-based media such as Wine Enthusiast, Wine Spectator and Robert Parker’s Wine Advocate.

Wineries should use discretion when selecting which bloggers they want to represent them. A good wine blog teaches readers about wines through passionate yet unbiased reporting. Bloggers search for new wines that fit their niche as bloggers. For instance, a blogger who focuses on small, family-owned wineries most likely won’t be interested in reviewing large production wines because that is not what their audience enjoys reading and learning about (Bacchus and Beery 2012). Wineries may elect to write appropriate stories, designed to draw in customers and build relationships, and send these, along with wine samples, to bloggers who capture an audience interested in similar wineries.

In addition, bloggers should have a sizable following so their reviews are seen by wine enthusiasts across the Internet. Jim Caudill, at Hess Collection expressed the importance of finding writers who are invested in their story, their wines, and have a strong presence in social media; “a blogger needs to build a brand (themselves) in order to build a community of followers. How they do that almost certainly would include a vibrant and active social media presence” (personal communication).

Blogger reviews can be used in a number of different ways to make the winery more successful. Favorable reviews can be posted on winery websites. If the blogger has effective search engine optimization (SEO), his or her reviews will show up when anyone searches on Google or Yahoo for information on any winery. Also, these reviews should be sent to the winery’s distributor, so they understand what people are saying about the wine. Favorable reviews will help distributors see the wine in a more positive light and better position the wine in restaurants and retail outlets.

Bloggers will post these reviews on their websites and on their web-based social networking service channels, such as Facebook and Twitter. These sites have large numbers of active users, for example, Facebook currently has more than 1.2 billion monthly active users and 0.75 billion daily active users (Facebook Inc. 2014). An active user base can translate into a wide social reach (“the total number of unique individuals who had the opportunity to see an item”) that may generate engagement (“some action beyond exposure, and implies an interaction between two or more parties”) and growth in your website and/or social media channels user base (#SMMStandards 2013). By reposting and “mentioning” the original post, fans can quickly spread the word to thousands of new people who have never read the blog or visited the site. Social media like Facebook and Twitter can be effective tools for bloggers to post their reviews for their fans to read without requiring them to visit the blogger’s website. This has become a growing trend in the US as many younger wine consumers spend more time on social networking sites. 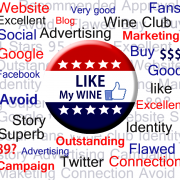 Creating winery fan pages on social networking sites can be extremely helpful in deepening and developing the relationships wineries have with customers. The same great story that is key for setting the winery apart can be shared via social media.  Channels such as Twitter can be beneficial, although Twitter is restricted by its 140 character limitation; other sites may often be more effective. Photos, links and short videos are more visually appealing on sites like Facebook. While winery history and bios are interesting, a successful campaign will offer more. Many tell the story of the winery and winemaker throughout the vintage year offering pictures and updates from bud break through harvest.

Shafer Vineyards in Napa, CA, has created a fan page told through the eyes of their two golden retrievers, Tucker and Cody. Winery dogs are an old tradition that has become a focal point for some wineries, including Common Dog in Rutherford, CA, whose wine and labels have dog themes. Their Facebook page and website have become a dog-lover forum of sorts, with winery fans posting funny pictures of dogs. This allows other dog lovers to connect with each other through the winery, making the relationship more meaningful for both parties.

Social Media pages are an important part of the marketing campaign, but they need to be managed carefully and correctly. Michael Wangbickler (2012) at Balzac Communications, a leader in winery public relations, stated, “This is a two-way conversation, not a one-sided monologue. By including elements that people can connect with (contests, polls, questions, etc.), you acquire that interest. In addition, a winery should put some thought into it. Get creative. The more interesting a social media campaign, the more engagement [you will receive from fans].” Listening to the consumer is an important way for wineries to become better in the consumer’s eye. Wangbickler went on to say that “Making that connection and having a consumer feel like a part of the ‘family’ is the best way. Always respond to people who post on your Facebook page, making them feel that their opinion is valued.”

Facebook, with its large and active user base, is currently the most powerful social media tool available to small businesses such as wineries. A Facebook presence allows the winery to connect with fans around the world in real time, but that may not be the best way to target a particular market. Looking through social media demographics information allows a business to pinpoint exactly who they are selling to and create effective marketing targeted at those users. Further, due to the popularity and growth in Facebook use and content, competition for news feed space and limited viewer time has increased, which in many cases has reduced reach (Constine 2014). Such sites may employ algorithms to filter their feeds to deliver relevant content (and advertising) to its users in order to remain significant and therefore has increased the challenge for content creators, i.e., a winery’s marketing efforts, to stay viable and upping the ante to earn one’s reach. Social media platforms can be abandoned (moving from Myspace to Facebook, for instance, for greater readership), or moved to less crowded platforms such as Pinterest, which may offer better reach.

Not all social media is created equal; each social media site (with the exception of Facebook) has very specific demographic information available that allows us to see who uses what social media site, as well as what they are looking at, at what time, and where they are located. While Facebook remains the dominant social networking platform, 42% of online adults use multiple social networking sites, with Instagram users nearly as likely as Facebook users to check in to the site on a daily basis (Duggan and Smith 2013). After Facebook, the following services are the most popular as measured by unique visitor traffic: Twitter, LinkedIn, Pinterest, Google Plus+, Tumblr and Instagram, which are listed in order of highest traffic rank to lowest traffic rank respectively (eBizMBA 2014). It may be worth developing specific identities on multiple platforms and becoming aware of social networking trends, site traffic metrics, and maintaining or adjusting your marketing strategy accordingly to each specific demographic market.

An Internet presence is only one part of a successful winery advertising campaign. It is important to create new relationships and nurture the ones that have already been created. These relationships will help increase sales and brand awareness. Retailing pioneer John Wanamaker is attributed to have said, “Half the money I spend on advertising is wasted; the trouble is I don’t know which half,” and this remains true today. The important thing to remember about Internet marketing is that you need to be consistent and offer a compelling ongoing story, not just discount pricing. Word of mouth travels fast and much of the information people find on any topic of interest is found on the Internet. An Internet media campaign is a cost effective way to increase brand awareness, gain more customers and connect to the ones you already have.