Grow tubes can be a useful tool when vines are young, getting them off to a quick start and promoting upright growth. Due to the greenhouse-like effect of the tubes, they also provide moisture at the base of the vine and protect against wind desiccation. Perhaps their most useful attribute is to protect vines from animal pests and herbicide drift.

There are many types to choose from including round, triangular, split, and snap tubes. They also range in color and height, with 24 inches, 30 inches, and 36 inches being the most common. The difference among tube types eventually comes down to cost. 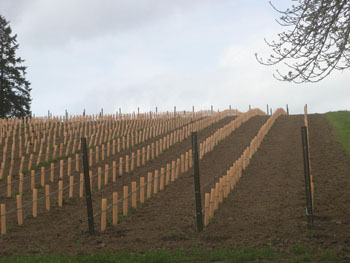 Soil should be mounded around the base of grow tubes to minimize herbicide contact and maximize the greenhouse effect. Removal of the tubes is necessary to allow vines to harden off before winter; therefore they should be removed in late summer.

Overall, the use of grow tubes is an individual choice. Not enough research has been done to show they are definitively beneficial or detrimental to the vine. However, in terms of herbicide management, grow tubes do make application easier and safer.

Studies have shown that tubes increase above-ground growth (Main, 1997). Main (1997) reported establishment of trunk and cordon on three of five cultivars with grow tubes in one season.

While advantages of grow tubes are numerous, there may also be disadvantages to their use. Some research has shown that vines grown without grow tubes produce more leaves and more leaf area in the first season (Zabadal and Dittmer, 2000). Other potential problems include substandard wood quality, reduction in cold hardiness, rapid growth of some fungal pathogens (while inhibiting others (Olmstead and Tarara, 2001)), higher populations of insect pests (including black widow spiders), and the added expense (Fiola, 2005). The use of grow tubes may also indirectly inhibit root growth by reducing multiple shoot formation (Bordelon and Blume, 2000).

References:
Bordelon, B. and J. Blume. 2000. Growth of grapevines with and without grow tubes. HortScience 35:424.