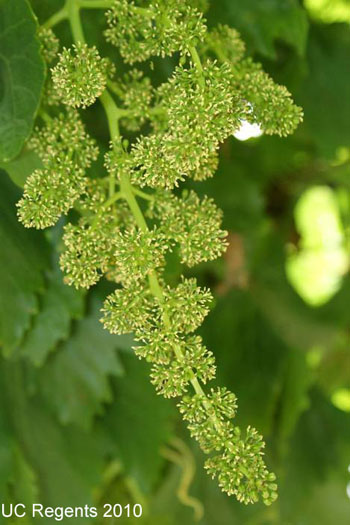 Why are tight clusters a problem?

In some grape cultivars, excessive fruit set may cause the growing berries to become tightly packed into compact clusters of grapes that are highly susceptible to rot. Thus, growers often reduce fruit set, particularly in table grapes, to allow for the development of large, uncrowded berries. The application of gibberellic acid (GA3), a natural plant growth regulator, can reduce cluster compactness of grapes by reducing fruit set.

The best application timing and dose depend on whether the grape is naturally seeded or seedless, the cultivar, environmental conditions at bloom, and cultural practices such as type of trellis and spray equipment used. Seeded wine grapes are generally treated with GA3 about three weeks before bloom with a solution containing 1 to 10 mg/L active ingredient (a.i.), depending on the cultivar. The clusters must be thoroughly treated, so a typical spray volume is 100 gallons per acre. Despite the potential benefits of thinning, GA3 is not widely used on winegrapes because the application of GA3 to seeded grapes may reduce shoot and cluster counts the following spring. Growers can minimize undesirable effects by applying GA3 directly to the clusters, but such applications may be impractical. Even when directed to the clusters, the pre-bloom application of GA3 may substantially increase the proportion of shot berries in seeded grapes. Shot berries detract from the appearance of table grape clusters, so GA3 is not recommended for thinning seeded table grapes.

In contrast with seeded grapes, GA3 is commonly used to reduce set of certain seedless table grapes. To reduce set of seedless grapes, apply between 0.5 to 20 g/acre GA3 to the vines when the calyptras (caps) on 30% to 80% of the flowers have abscised; multiple applications may be made if bloom is prolonged. Seedless grapes are generally more tolerant of GA3 than seeded grapes, but the use of GA3 also can reduce return fruitfulness of certain seedless cultivars. In fact, table grape breeders have selected for varieties that require less manipulation to produce quality grapes, and many recently released cultivars require less GA3 than traditional cultivars to achieve adequate thinning.

Caution: Plant growth regulators (PGRs), such as GA3, are classified as pesticides and are subject to the same rigorous regulatory framework. Plant growth regulators may not be approved for grapes in certain regions, or for particular cultivars of grapes. The unapproved use of PGRs on grapes may result in contaminated crops with illegal pesticide residues, so seek guidance from a qualified local pest control adviser before applying any PGR or pesticide to your grapes.

Using Plant Growth Regulators to Improve the Color of Grapes