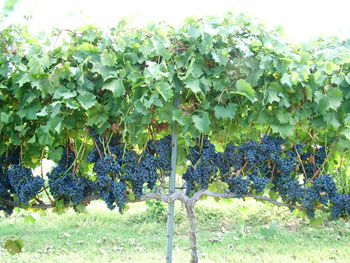 Vertical Shoot Position, or VSP, is a common and widely used trellis system. In the VSP system, the vine shoots are trained upward in a vertical, narrow curtain with the fruiting zone below. A VSP trellis system can consist of four to six levels of wire. The cordon or fruiting wire is typically about 3 feet off the ground. Above the cordon wire are movable catch wires to train the growth of the shoots in an upward direction. These shoots may be trimmed at the top, giving the vineyard row a hedge-like form. The top wire is often about 60 inches to 70 inches high, but can also be adjusted.

For vines with small vine size, the VSP trellis is ideal. VSP can ease the work of many cultural practices such as leaf removal, shoot removal and cluster thinning while also providing for more efficient spray coverage. It is particularly suited to the natural upward growth of Vitis vinifera vines. VSP also has the advantage of being compatible with vineyard mechanization. 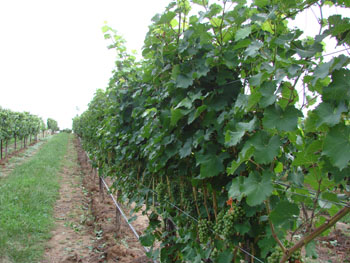 The VSP system may be more difficult to manage with high vigor cultivars or on fertile sites that produce large vines. Pay special attention to leaf removal to keep the canopy from becoming too dense and to reduce disease. In climates with high amounts of sunlight and high heat, managers must take precaution not to remove leaves on the afternoon side of the canopy (west or south) to prevent sunburn. In those cases, canopy management on a VSP is practiced only on the morning side (east or north) of the canopy.