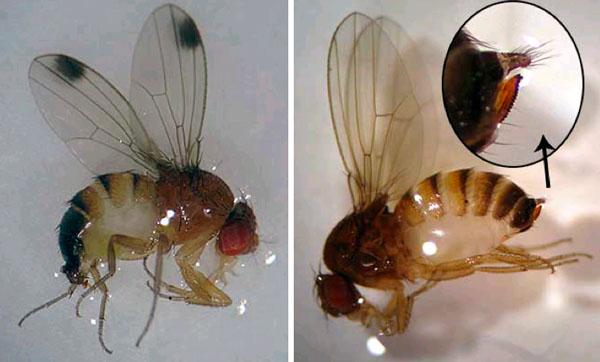 The Spotted Wing Drosophila (SWD), Drosophila suzukii, belongs to a group of tiny flies commonly called pomace flies, vinegar flies, or small fruit flies. They are not related to the larger “true” fruit flies (Tephrididae) such as the blueberry maggot fly. They are instead related to other Drosophila species such as D. melanogaster, which because of their remarkable reproductive rate, are often cultured for genetic research.

SWD is known to infest about two dozen cultivated plant species worldwide and has the greatest potential to severely damage thin-skinned berry crops. SWD feed on a broad range of hosts including wild and cultivated berry crops including grapes; however, grapes are not their preferred host (Bellamy et al., 2013).

Drosophila species have antennae and mouthparts that are keenly attuned to the odors of over-ripening or damaged fruit. As such, these flies are commonly found amassing in pantries and packing sheds. Odors emitted by fermenting fruit (alcohol and acetic acid) are the most powerful attractants for SWD and other Drosophila.

The main behavioral difference between SWD and native drosophilids is that SWD females use their double-bladed and serrated egg-laying tube to insert eggs below the skin of a healthy intact berry. Within 3 days, these eggs hatch into white larvae (maggots) that burrow deeper into fruit. Sweeter (higher obrix) fruit tend to harbor more SWD eggs and larvae. As egg laying continues for SWD, berries begin to leak, then deflate (collapse) and drop to the ground. Berries covering the ground just below the vine are usually the first sign of a heavy SWD infestation and it is here where some larvae will complete their development. Egg-laying and larval feeding by SWD may hasten berry deterioration by introducing yeasts and molds that attract various insect scavengers. Broods of SWD may go undetected well after infested fruit have entered the human food chain.

The most obvious sign of SWD activity in a berry field is the presence of the male flies with their distinct black spot on each wing tip. Female SWD and both sexes of many native Drosophila lack these apical wing spots. The few species whose males bear spotted wings will have multiple spots located in different positions from the spots on SWD wings. Male SWD also have two distinct black spots on their front legs, which are actually comb-like hairs that aid in courtship. Both sexes of SWD, when compared with those of their native cousins, appear more robust; banding patterns on their abdomens also differ. A hand lens can be handy for identifying male and female SWD on sticky traps or those floating in a baited trap.

Early detection of adult SWD is critical because larval infestations may be vineyard-wide even as adult SWD populations remain small. Various traps can be built to determine the presence and absence of adult SWD.  Important features include holes for flies to enter the trap as well as a bait—typically apple-cider vinegar. A sticky card is optional; however, the vinegar itself will lethally capture a number of adult SWD. SWD prefer shadier habitats. Therefore, adults may be detected earliest when traps are placed along field edges and in fruiting vines.

Once SWD are detected on a farm, begin preventative insecticide sprays as soon as each cultivar reaches veraison. Sprays should be made weekly and reapplied after a heavy rain. However, it is highly recommended that insecticidal products from a different IRAC class be rotated with each new application for resistance management. Refer to your local county extension office for general guidelines and a particular product’s legal usage, application directions, safety precautions, and restrictions. Insecticides will kill only adult SWD. Larvae and pupae of SWD are safely inside berries and can only be killed by disposing of those infested fruit in the vine and on the ground. Crop sanitation will greatly reduce over-summering populations of SWD.  Re-infestations of the crop by SWD may be further reduced by removing or pruning back wild fruiting hosts. The threat SWD poses to thicker-skinned grapes such as muscadines is unknown; however, damaged and diseased muscadines will suffice as suitable breeding habitat for SWD.

Good canopy management is important, as this allows for better visual inspection of the fruit, reduces the progress of secondary cluster rots after SWD injury, and allows better penetration/distribution of SWD sprays if they are required.

SWD is not a native to the US. In North America, the fly now occurs as far north as Michigan and British Columbia, Canada. Between 2010 and 2011, SWD was confirmed in most states in eastern North America.