The quantity of water in soil is called the soil moisture content. After rainfall or irrigation, some water drains from the soil by the force of gravity. The remaining water is held in the soil by a complex force known as surface tension and varies depending on the amount of sand, silt, and clay. Sands, with larger particles and smaller total surface area, will hold less water than clays, which have much smaller particles and larger total surface area. The drier the soil, the greater the surface tension, and the more energy it will take for a plant to extract water.

Vineyard managers often measure soil water content as a guide to determine their irrigation timings and amounts. There are several methods for monitoring soil water content. Correlating these methods with actual inches of moisture per foot of soil is very complicated (see Recommended Links) but at the very least can help a grower to identify patterns of water use, depth of irrigation, and soil water content trends over time. 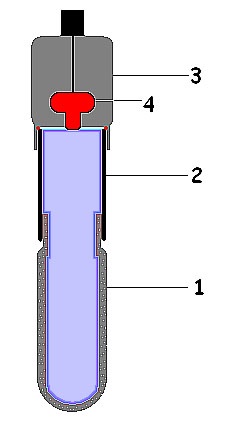 A tensiometer, as its name implies, is a device for measuring soil moisture tension. The design is a simple tube with a porous cup at the lower end and a vacuum gauge on top. The tube is filled with water, sealed airtight, and placed in soil. As soil dries, water is pulled from the porous cup into the soil, creating a vacuum and causing the gauge to move. As soil continues to dry, more water is pulled out and the suction increases. As soil re-wets after a rain or irrigation, water moves back into the cup and the suction decreases. Installing tensiometers in soil requires attention to detail to obtain accurate readings (see Recommended Links for installation downloads).

Tensiometers are usually placed as a pair with the shorter tube positioned in the middle of the rooting zone (e.g., 18 inches deep) and a longer tube positioned near the bottom of the rooting zone (3 to 4 feet deep). Growers can use the difference between the two tubes to monitor water usage and determine the effective depth of irrigation. At least two stations (two tubes per station) are recommended per field, or more depending on soil variability.

Tensiometers have the advantage of being inexpensive, and easy to install, maintain, and read. They are better in fine-textured soils where good contact can be made between the porous cup and the soil. They do not work well in coarse sands where good contact may not be possible. Because the gauges are aboveground, the units are prone to damage by vineyard equipment.

Electrical resistance blocks are also known as gypsum blocks or soil moisture blocks. They are simple devices with two electrodes embedded in a block of gypsum or other similar material. When blocks are buried in soil, water moves into or out of the block, depending on the moisture of the soil, changing the resistance between the two electrodes. Like tensiometers, gypsum blocks are cheap and easy to install. They are usually installed in at least two stations per field, at two depths, and must be installed correctly to provide accurate readings. Some block designs perform better under wet soil conditions and some correct for soil temperature. The meter used to read the blocks can be moved from field to field, but is specific to the block design (i.e., it is not a simple ohm meter). The wires aboveground are much less prone to damage by equipment compared to tensiometers. 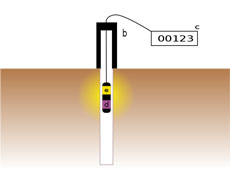 A neutron probe uses a radioactive source for measuring soil moisture. A tube, usually made of PVC or aluminum, is installed in soil to a depth of interest and the radioactive probe is lowered into soil to measure soil moisture at as many depths as desired. The probe emits fast neutrons that are slowed by water in the soil in a way that can be calibrated to the soil water content. The probe has a significant advantage, especially for perennial crops, because access tubes are easy to install and relatively permanent. Another advantage is the reading accounts for a spherical area about 10 inches in diameter, much greater than other methods. The major limitation to this method is the probe itself; it is expensive and the presence of a radioactive source triggers requirements for operators to be trained and licensed in handling, storage, and use. In some production regions, service providers are available, usually at a fixed cost per access tube for a growing season.

Di-electric sensors measure the di-electric constant of soil, a characteristic that changes with changing soil moisture. A common method is called time domain reflectometry, or TDR. The theory behind how this method works is too complicated to be discussed here. The advantage of these types of systems is that they are designed to be left in place and provide continuous readings of soil moisture. The disadvantages are that the units are expensive and read soil moisture only a very small distance from the unit.

All measures of soil moisture suffer from the same limitation — the value of the information is dependent on the extent to which the soil where the measurements are taken reflects the rest of the field. Where soil variability is high, growers must exercise caution in relying too heavily on relatively few measurements.

Irrigation of Winegrapes, University of California