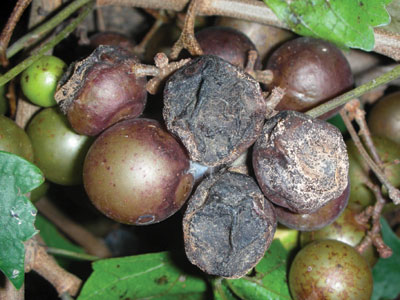 Berry rot and collapse as a result of ripe rot. Note the pink color of the fungal growth and spores on the surface of several of the berries. Photo by Dr. Turner Sutton, North Carolina State University.

Because the primary source of spores for new infections results from structures formed in old plant tissue, sanitation is extremely important. Proper dormant pruning and destruction of canes, clusters, and other plant parts can significantly reduce the amount of primary inoculum (spores).

A complete fungicide program targeting black rot will help manage damage by other fungi early in the season and reduce the risk of early infection by fungi in the genus Collectotrichum. Fungicides used early in the season, during bloom, and during initial fruit development will be most effective for limiting the damage caused by ripe rot. If conditions are favorable for ripe rot during fruit ripening, apply effective fungicides. If contemplating use of a fungicide near harvest, remember to check on the pre-harvest interval (PHI) of that fungicide to be sure it can be used close to harvest. Consult with your county Extension office for current fungicide recommendations for ripe rot management.

Ripe rot is caused by fungal species in the genus Colletotrichum. The fungus overwinters as dormant mycelium in old berries and infected pedicels. Ripe rot is an important bunch rot disease in years when rain is common and temperatures are warm during fruit maturation. In spring when weather is favorable, spores (conidia) are produced on pedicels and fruit, and disseminated by splashing rain to susceptible plant tissue. Spores can infect fruit at all stages, from immature green fruit to ripe fruit. Production of spores from old berries and pedicels is greatest earlier in the season, with very few spores produced in August. Secondary spores produced on the current crop can infect ripe fruit after August. Regardless of the timing of infection, symptoms do not develop until ripening. Symptom appearance is most likely to occur when weather is predominately wet and warm (77ºF to 86ºF).