Dormant pruning is a critical component of the grape production system. It provides the mechanism to maintain the training system, allows one to select the fruiting wood, and to manipulate the potential quantity of fruit produced. After a young vine has been trained and all of the “permanent” vine structures are developed, annual pruning should be done during the dormant season (dormant pruning) to remove the previous year’s fruiting canes or spurs (now two years old) and excess one-year-old canes.

Because of the way grapevines grow and produce fruit, growers must prune annually. Fruit is only produced on shoots growing from one-year-old canes. Therefore, healthy new canes must be produced every year to maintain annual production of fruit.

The training system is designed to encourage the production of new fruiting canes at specific positions on the vine – the arms or cordons. Pruning should be done to selectively remove unsuitable or extraneous canes, while retaining a small number of good canes. Cane selection serves two functions, to produce fruitful shoots in the coming season, and to produce healthy shoots from which a good fruiting cane can be selected in the next dormant season. At each arm, these functions can be divided between two canes: a fruiting cane or fruiting spur, (depending on the training/pruning system) and a renewal spur. Alternatively, one can use a single fruiting cane or spur at each arm, and retain one of the basal fruitful shoots as a fruiting cane for the next season. 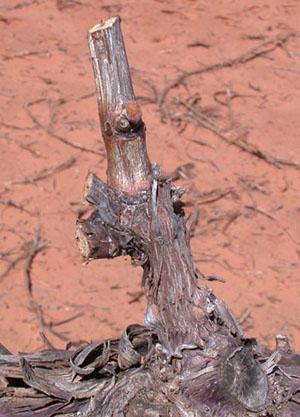 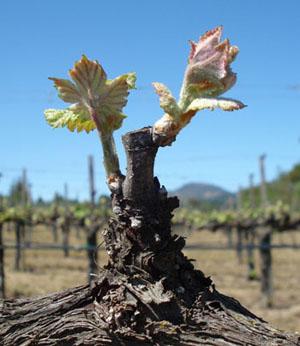 Dormant pruning of grapevines can be done at any time between leaf drop in the fall and budbreak in the spring. However, the logistics of completing the job in a specific time period and the availability of labor often influence the timing of pruning. There also are vine health considerations that enter into the decision of when to prune. Pruning in the fall may increase vine susceptibility to freeze injury compared to later pruning (Wolf and Poling, 1995). Therefore, in regions where there is a significant risk of cold injury, it can be advantageous to postpone pruning until after winter’s coldest temperatures. Postponing pruning also enables an assessment of cold injury and adjustment of pruning levels to compensate for injury losses. A practice called “double-pruning” is sometimes used to avoid spring frost injury. Canes are pruned long during the winter, then once budbreak occurs the canes can be cut again to the desired number of buds. This effectively delays budbreak of the buds near the base of the cane by several days. Later pruning commonly causes the vines to “bleed” sap from the pruning cuts, but this is not harmful to the vine.

How much to prune? 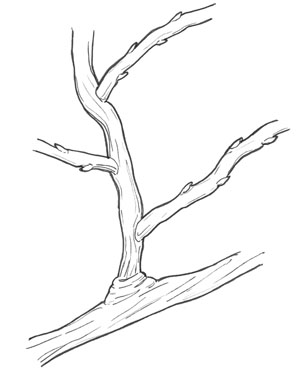 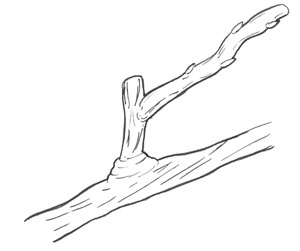 Spur pruning. Growth of spur and buds during the growing season, and the resulting spur the following season. Images courtesy of Eric Stafne, Mississippi State University.

In addition to maintaining the vine’s training system, pruning reduces crop production by removing fruitful buds. Varying the extent of dormant pruning is one way to influence cropping level. The term bud count (also node count or node number) is used to describe the number of dormant buds retained at pruning. Generally, bud count considers only the buds having clearly defined internodes in both directions (Wolf and Poling, 1995), thus basal buds are not included in the count. Basal buds, sometimes referred to as noncount buds, are not included in bud counts because frequently they do not produce shoots, and if they produce a shoot it is often unfruitful.

Grape growers often prune vines with the intent to achieve a balance between fruit production and adequate, but not excessive, shoot growth. Increasing the bud count increases the number of shoots, which, if excessive, can lead to a crowded canopy and increased shading. Cropping levels are also increased when bud count increases, and the vine may not be capable of fully ripening high crop levels despite the increased shoot number. At very high bud counts the vine compensates for the large number of shoots with shorter shoot growth and fewer clusters per shoot (Coombe and Dry, 1992).

Excessive pruning –- retaining too few buds -– leads to an undercropping situation. Removal of fruitful buds reduces crop load, but it also eliminates primary shoots. When there are too few shoots in relation to the vine’s growth capacity, the vine compensates for the deficit by increasing the vigor of the remaining shoots, producing more extensive lateral growth, and stimulation of shoot growth from secondary, tertiary, or latent buds. The consequence is often an excessively shaded canopy that provides a poor fruit-ripening environment.

Because pruning directly influences the number of shoots and the potential crop level, it is often the most significant annual management practice affecting vine balance. Consequently, the concept of vine balance is the basis of most pruning strategies. In some winegrowing regions, balanced pruning formulas are used to guide growers’ decisions on the number of buds to retain. The bud count is based on an estimate of the weight of extraneous canes removed by pruning –- the pruning weight. For example, the formula [20 + 10] indicates that 20 buds should be retained for the first pound of pruning weight and another 10 buds for each additional pound. Thus a vine with a 3-pound pruning weight would retain [20 + 10 + 10 = 40] buds. Wolf and Poling (1995) recommend a [20 + 20] pruning formula for Chardonnay, Riesling, Cabernet Sauvignon, and Cabernet Franc in the mid-Atlantic region of the U.S. Balanced pruning formulas may not be reliable, however, when summer trimming of shoots is done as part of canopy management. Development of balanced pruning formulas requires research on the specific varieties and growing conditions of a region. Growers may learn from experience to fine tune the strategy for their vineyard as the site influences vine growth.

Another pruning strategy that utilizes the vine balance concept is to adjust pruning levels based on a visual accounting and assessment of cane growth from buds retained in the previous year. A balanced vine will have strong, but not overly vigorous, cane growth from all retained buds. If some canes are weak, correspondingly fewer buds should be retained for the next season. However, this may not fix the problem and other vineyard factors should be investigated as possible contributors to low vigor.

If some canes were excessively vigorous, that is an indication that the vine’s canopy may have been too large, perhaps because too few buds were retained the previous year. Again, other vineyard circumstances must also be considered, such as having vine spacing too close for the soil type or excessive application of fertilizer. The situation might be remedied by retaining a corresponding number of additional buds to accommodate the excess vigor, if there is adequate space on the trellis. If a crowded canopy is likely to be a problem, another solution will be necessary. One approach is to retain one or more ‘vigor diversion’ or ‘kicker canes’ in addition to the fruiting canes. Shoots are allowed to grow from these canes (diverting the excess vigor) until about bloom time or shortly thereafter; then the entire cane is cut off at its base. Other vineyard management practices should also be considered to reduce excessive vigor, including the use of cover crops.

Sometimes pruning level is approached simply from the perspective of how many buds are required to fill the allotted trellis space, or to attain a desired shoot density in terms of buds per unit area. This approach might be satisfactory if all the vines in the vineyard are uniformly in balance, but it ignores vine-to-vine variability that can often be significant. Therefore, this approach is unlikely to give satisfactory results if there is significant variation of vigor in the vineyard, or if the vineyard is generally out of balance.

The goal of achieving a balance between cropping level and shoot growth is often a challenge. Despite the powerful influence of pruning on crop levels, it may not be enough by itself to achieve the desired vine balance. For instance, Pinot noir grown in western Oregon often requires additional crop thinning during the season to ensure complete ripening of the fruit. This is usually not a consequence of inadequate canopy, but rather the limitations imposed by the cool climate on the amount of fruit that Pinot noir can ripen to very high quality standards. Therefore, it is a common practice to thin clusters of Pinot noir at some point in the season to limit the crop to a size that can be properly ripened.

Pruning Safety in the Vineyard