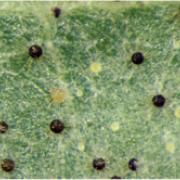 Experienced grape growers are familiar with the concept that what goes around comes around —also known to devotees of Eastern philosophy as ‘karma.’ Grapevines have a history, and the previous season’s crop, weather and water stress will affect this year’s crop. One never starts with a ‘clean slate.’

But how much does it matter with diseases such as powdery mildew (PM)? Given that growers have powerful fungicides to suppress powdery mildew, don’t spray programs act as a sort of reset button that cancels out the impact of the overwintering inoculum? How much does the amount of inoculum originating from last year’s infections really matter?

The answer, in the case of powdery mildew, is “it matters a lot.” To understand why, let’s review the overwintering biology of the powdery mildew fungus, Erysiphe necator.

Overwintering cleistothecia. In eastern North America, powdery mildew survives the winter by forming minute fruiting bodies called cleistothecia (photo). These hardy structures contain sexual spores called ascospores, which result from mating among individual powdery mildew colonies. These spores initiate disease at the start of the growing season, and they increase the genetic diversity of the fungus population. They are distinct from the asexual spores called conidia, which are produced from new infections throughout the season and serve to spread disease whenever conditions are favorable (which is most of the time!). Cleistothecia typically start forming on the surface of infected leaves and clusters in mid- to late summer, and they remain firmly attached until they mature, after which they can be washed away by rainfall.

In New York, only those cleistothecia lucky enough to land within protected bark crevices on the grapevine trunk manage to survive the winter. During rain events between budbreak and bloom (approximately) the following spring, ascospores from surviving cleistothecia are released and dispersed by the wind. Thousands of conidia can be produced in five to ten days when temperatures are in the 60’s and 70’s Fahrenheit (longer at cooler temperatures) from each ascospore that lands on green tissue and infects it. These conidia can then cause more infections with their own new crops of additional conidia, leading to repeated secondary infections. Through multiple generations, therefore, each ascospore present in the fall can be responsible for literally millions of secondary infections in the vineyard the next summer, unless they are somehow controlled. 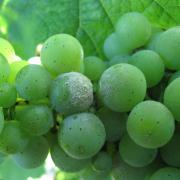 Even a small amount of powdery mildew on grape clusters affects wine quality, since overwintering cleistothecia on grapevine trunks directly affect the number of primary infections in the spring.

As noted above, the cleistothecia containing these ascospores require time to mature once they begin to form (i.e., once two powdery mildew colonies on infected tissues have mated). Maturation time is a function of temperature (accumulated degree days), but new powdery mildew colonies that are initiated after Labor Day typically produce few if any overwintering spores. So if your vineyard is relatively ‘clean’ through the end of August, chances are that you will have many fewer overwintering cleistothecia than if you had let powdery mildew control lapse earlier.

Experimental evidence. The effect of midsummer powdery mildew control can be huge, as illustrated by an experiment in a Chardonnay vineyard where the Wilcox crew stopped spraying for powdery mildew at different times. Treatments were as follows: 1) spray through Labor Day; 2) spray through early August; and 3) stop spraying in early July. This created a situation in which varying levels of powdery mildew (clean, moderate, and high) were present at Labor Day.

Just before budbreak the following spring, cooperator David Gadoury counted the number of cleistothecia present in the bark of vines subjected to each treatment during the previous year. Then, all vines were sprayed with the same, intentionally minimal fungicide program, and the clusters were rated for disease severity before harvest. Here’s what they found:

Table 1. Density of overwintering cleistothecia in a Chardonnay vineyard under different control programs in Year 1 and resulting cluster disease severity in Year 2.

Simply put, if the same percentage of cleistothecia release primary ascospores, and the efficacy of the sprays (which we hope is up in the 98% or higher level) is the same, then every increase in the number of overwintering cleistothecia means an equivalent increase in the number of potential infections and likely “escapes” from the spray program the following spring. And recall from the discussion above that the powdery mildew fungus can produce a new generation in as few as five days, allowing for it to develop explosively once it gets started if control is less than perfect. Then, also remember that most cluster infections occur in late spring and early summer—roughly, prebloom through bunch closing—and that berries are extremely susceptible for the first couple of weeks after fruit set. So, any increase in the early leaf infections originating from overwintering cleistothecia can be multiplied many times over by the time that susceptible fruit are present, leading to results such as shown in Table 1.

Management implications: Maintaining good powdery mildew control through Labor Day by continuing appropriate fungicide applications through mid-August to target these foliar infections is one component of a program for minimizing powdery mildew fruit infections the following year. This may be particularly important for growers of highly-susceptible varieties such as Chardonnay.

Tim Martinson is a senior extension associate in the department of horticulture, and Wayne Wilcox is a professor of plant pathology and plant-microbe biology.