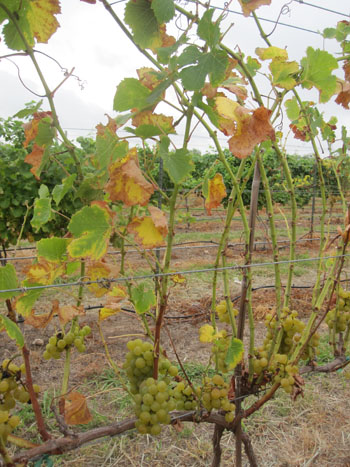 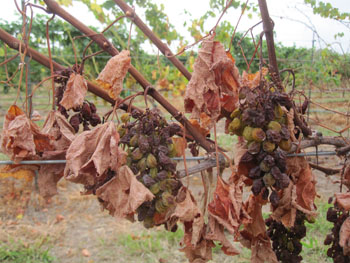 Plants may appear somewhat stunted when first infected. As the fungus continues to grow, there will be more advanced wilting and foliar discoloration. In severe cases, defoliation can occur early in the summer and fruit can become sunburned due to exposure. Infected plants may be killed in the winter or survive and continue to decline slowly the following season. Phymatotrichum root rot appears in a circular pattern in the vineyard, and the pattern will slowly enlarge over a period of years.

When choosing a vineyard site, consider the prior cropping history. Avoid locations where cotton or alfalfa was grown previously, since there is greater risk for presence of the inoculum. Planting sites with a soil pH below 6.5 will be much less likely to have problems with Phymatotrichum root rot.

There are no chemical management options for Phymatotrichum root rot.

Phymatotrichum root rot, caused by the fungus Phymatotrichopsis omnivora, is a disease of several agronomic crops including cotton and alfalfa. Grape is also a host for P. omnivora. The disease is typically only a problem where soils are alkaline (pH 7.0 – 8.5) and calcareous.

Phymatotrichopsis omnivora survives in the soil primarily as hardened sclerotia (survival structures). Sclerotia germinate and give rise to mycelium that infects the root cortex and vascular elements. As the fungus disrupts the vascular elements of the root system, water movement in the plant is diminished. This results in sudden wilting of infected plants, especially during periods of hot and dry weather. The fungus can parasitize multiple roots on the same root system and also colonize overlapping roots from nearby plants. As the fungus colonizes roots, it will typically rot the taproot first and move to lateral roots. Mycelium (body of the fungus) on the surface of the root will be very thick with a unique cross-shaped appearance. Optimal temperatures for growth of P. omnivora are approximately 82ºF to 86ºF.