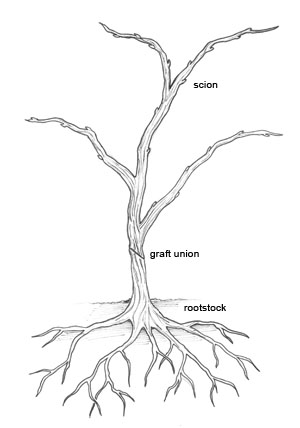 Grapevines can be grown on their own root systems (own-rooted or self-rooted vines) or they may be grafted onto a rootstock. A grafted vine consists of two parts, the scion variety (e.g., Pinot noir), which produces the above-ground parts (trunk, shoots, and fruit), and the rootstock variety (many of which are often numbers, e.g., 101-14), which provides the root system and lower part of the trunk. The position on the trunk where the scion and rootstock are joined by grafting grows together and is called the graft union. Successful healing of the graft union requires that the vascular cambium of both the rootstock and scion are in contact with each other, since these are the only tissues having meristematic activity necessary for the production of new cells to complete the graft union. Healing of the graft union often results in the production of abundant callus tissue (a wound healing tissue composed of large thin-walled cells that develop in response to injury), often making the area somewhat larger than adjacent parts of the trunk. Because rootstock and scion varieties may grow at different rates, trunk diameter can vary above and below the graft union.

Rootstock varieties were originally developed to provide a root system for Vitis vinifera L. (“European” winegrape) varieties that are resistant or tolerant to phylloxera, an insect native to North America and to which V. vinifera roots have no natural resistance. Subsequently, rootstocks have been developed based on other desirable characteristics including resistance or tolerance to various nematodes (microscopic soil-borne roundworm) and adaptation to different soil conditions. Rootstock variety may also influence nutrient uptake, vigor of the scion variety (the fruit-producing portion of a grafted vine) and to some extent its phenology.

Most rootstocks are either native North American species or hybrids of two or more of these species, including Vitis riparia, Vitis berlandieri, and Vitis rupestris. The rooting pattern and depth, as well as other root system characteristics, vary among the species and hybrid rootstocks, therefore the rootstock can influence aspects of vine growth, including vigor, drought tolerance, nutrient uptake efficiency, and pest resistance. Therefore, rootstock variety selection can be an important factor in vineyard development.

The function of grapevine roots

The root system of a mature grapevine consists of a woody framework of older roots (Richards, 1983) from which permanent roots arise and grow either horizontally or vertically. These roots are typically multi-branching, producing lateral roots that can further branch into smaller lateral roots. Lateral roots produce many short, fine roots, which has the effect of increasing the area of soil exploited (Richards, 1983). Certain soil fungi, called mycorrhizae, live in a natural, mutually beneficial association with grape roots. Mycorrhizae influence grapevine nutrition and growth, and have been shown to increase the uptake of phosphorus.

The majority of the grapevine root system is found within the top 3 feet (Richards, 1983; Winkler, et al., 1974) of the soil, although individual roots can grow much deeper in certain soil conditions and profiles. Distribution of roots is influenced by soil characteristics: the presence of hardpans or other impermeable layers, the rootstock variety, and cultural practices such as the type of irrigation system (Mullins et al., 1992). Grapevine roots require good internal soil drainage to function. Water-saturated soils do not have air spaces that allow roots to respire. High water tables and heavy textured soils (fine silty loams and clays) often restrict root growth, and thereby limit vine size and nutrient uptake from soils. Subsurface drainage tiles are often recommended in non-irrigated production areas to improve internal soil drainage.

Parts of the Grape Vine: Flowers and Fruit