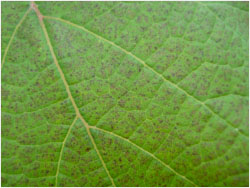 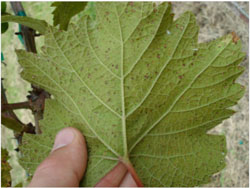 Symptoms of ozone damage appear predominantly on older leaves as small interveinal spots (0.1 to 0.5 mm in diameter), showing only on the adaxial (upper) leaf side. The abaxial (under) leaf side does not show stipple symptoms but may show necrotic spots if symptoms are severe. Stipple may begin as a yellow color but is most commonly recognized when spots become brownish bronze to dark brown. Heavily stippled leaves may have a uniform bronze appearance from a distance and necrotic spots up to 2mm in diameter. The tissue in the veins surrounding lesions remains green. Affected leaves eventually drop from the vine. In severe cases, sunburn of fruit may result if premature leaf drop exposes fruit to excess sunlight. 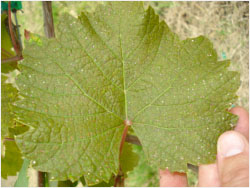 Oxidative stipple of grape leaves as the result of high atmospheric ozone levels is a problem that has been recorded as far back as 1954 in the San Bernardino Valley of California. Since then, ozone damage to grapevines has been recorded in many of the major grape producing regions in the United States, including New York, North Carolina, Ohio, Pennsylvania, Texas, and Virginia.

Cause of Damage: Atmospheric Ozone

Ozone levels increase in the atmosphere when ozone is introduced from the stratosphere by vertical movement during electrical storms or when sunlight reacts with nitrogen oxides and hydrocarbons introduced into the atmosphere through the combustion of coal or petroleum fuels. Ozone levels are generally higher in the afternoon, particularly during calm, sunny, spring and summer days when atmospheric pollutants linger. Gas exchange by leaf stomata is greatest when high temperatures and humid conditions persist in the afternoon, increasing leaf exposure to ozone.

Ozone is introduced to the vine through the stomata, where it reacts with leaf cell membrane constituents causing them to collapse and become necrotic, leading to the development of the interveinal brown lesions typical of the disorder.

Treatment: The most common vineyard practice to prevent ozone damage is the application of foliar nitrogen sprays to increase N content in the leaves. Applying antioxidant materials to the foliage, such as ethylene diurea (EDU), has also shown to reduce ozone damage to grapevines.

Grapevine Problems: Leaf Spots Not Caused by Insects or Disease