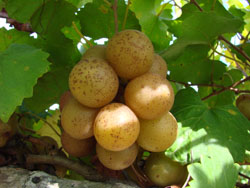 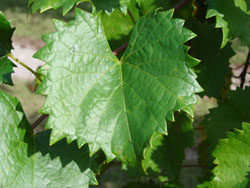 Muscadines (Vitis rotundifolia Michx or Muscadinia rotundifolia) are native to the southeastern parts of the United States where they have been cultivated for over 400 years. They are used for jellies, juice, and wines. Currently, work focusing on the nutraceutical value of muscadines is receiving considerable attention.

Muscadines are grown in a region extending from Texas and Oklahoma east to the Atlantic Ocean and from the Gulf Coast north to the southern parts of Tennessee, the eastern parts of Virginia, and up the coast to Delaware. Muscadines are adapted to areas having a hot, humid climate. Vines are frequently damaged when winter temperatures drop below 10ºF. Vine growth begins late in spring, and generally over 200 days are required for proper fruit maturation. In general, muscadines are grown where Pierce’s disease limits bunch grape production.

Muscadines grow and fruit best on fertile, sandy soils and alluvial soils. Wet or heavy soils are not desirable. Muscadines show tolerance to many of the diseases and insects commonly associated with bunch grapes, but still require good air drainage. Low yields and poor fruit quality are characteristics of muscadines grown on poor sites.

Muscadines are grown as own-rooted cuttings; there is no need for grafting vines. Other Vitis species and muscadines are generally graft incompatible. Propagation of muscadines is generally accomplished through layering in midsummer or by rooting softwood cuttings taken immediately after bloom.

Some varieties suggested for commercial plantings have only female (pistillate) flowers while others are perfect flowered. Female flowered varieties should be located close to a perfect flowered variety (within 25 to 30 feet) to insure adequate cross-pollination. In a vineyard consisting mostly of varieties having female flowers, it is suggested that every third row should be a pollinizer. Muscadines are primarily wind pollinated.

The two basic trellis designs used in commercial muscadine plantings are the single wire bilateral cordon and the Geneva double curtain. Vine spacings suggested for the single wire, bilateral cordon system are 16 to 20 feet between vines in the row and 10 to 12 feet between rows. For the Geneva double curtain system, use in-row spacings of 8 to 10 feet, with between row spacings of 12 to 14 feet. The wider spacings between rows are suggested for vines planted on sloping ground.

Muscadines vines are trained to a system of cordons and spurs. Spurs are established from side shoots that have arisen from cordons during the previous growing season. They should be spaced about 6 inches apart on cordons. Each spur should be cut back to between 2 and 4 buds. As new shoots develop, flowers will be found in axils of the third, fourth, and fifth leaves. On young vines, each cane arising from these spur buds should also be cut back to about 2 to 4 buds during late dormancy to form a spur cluster. With increasing age, the spur clusters need to be thinned. Spurs growing straight down on the cluster should be removed as should any spurs found on the trunk or at the junction of the cordons and the trunk. If a cordon is weak or damaged, it should be cut back and a new shoot should be trained to take its place. Any tendrils that wrap around cordons or spurs should be removed to prevent girdling. Yield expectations for a mature muscadine planting using the bilateral cordon training system range from about 4 tons per acre for fresh fruit up to about 8 tons per acre for wine production.

While muscadines have resistance to certain pest problems such as phylloxera and Pierce’s disease, other diseases such as bitter rot, black rot, angular leaf spot, macrophoma rot, ripe rot and crown gall can be problems. Grape flea beetle, aphids, grape root borers, grape leafhoppers, moths, wasps, and stink bugs can also cause problems with muscadines. Information on control of diseases, insects and weeds plus selected recommended cultural practices may be found at www.smallfruits.org, the website for the Southern Region Small Fruits Consortium.

The University of Georgia maintains a website on muscadines that provides numerous links to regional growing guides, commercial production, and all things muscadine.