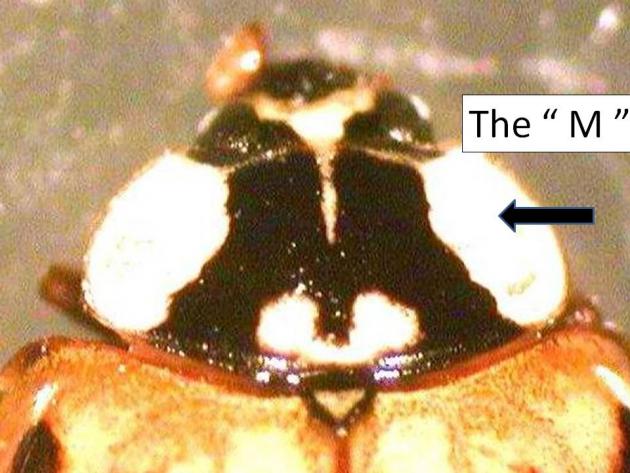 The Multicolored Asian Lady Beetle (MALB) is distinguished from other lady beetles by the “M”  (or “W”, depending on how you view the beetle!) on the pronotum ( the area between the head and the thorax).  Other beetles do not have this unique mark. 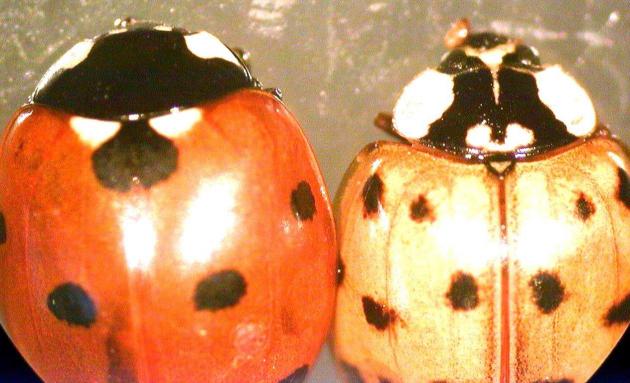 On the left is the 7- spotted lady beetle (a different species) than MALB, which is on the right. Multicolored Asian Lady Beetle may come in many colors with several or no spots and can be distinguished from other lady beetles by the black “M” or “W” (depending on the viewing direction) between the head and abdomen. 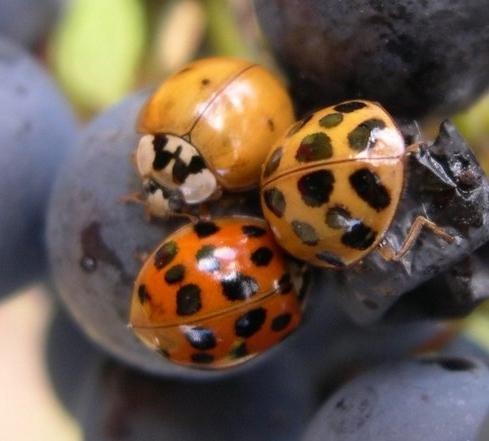 These lady beetles seldom cause primary damage; however, they do take advantage of breaks in grape skins caused by other insects, animals, or diseases. They cause minimal damage to the grapes; however, they produce a substance when touched or squeezed. This substance can end up in the crusher and contaminate the juice with a foul aroma.

This particular species, Harmonia axyridis (Pallas), is from the Far East regions of Asia. It is native to Korea, Japan, China, Himalayas, Formosa (Taiwan), Siberia, and the Bonin Islands. It was introduced into France in 1982 from China for biological control in orchards.

Though debate continues on the exact point of origin for establishment, this species is found throughout the eastern seaboard with observations from Florida through Quebec, Texas through Missouri, and western locales such as Oregon, British Columbia, Washington, and central states such as Ohio, Wisconsin, Kentucky, and Illinois.

In the United States, this species is a very aggressive feeder and appears to be displacing some of the native lady beetle species in Ohio, Michigan, West Virginia, and other areas. Multicolored Asian Lady Beetle has been found in many crops where food sources such as aphids and scales exist including grain crops, soybeans, conifers, ornamentals, and fruit crops.

To understand how the population escalates, you must understand the life cycle. It is believed that non-mated adults may form the bulk of the overwintering population in hibernation.  Mating takes place just before dispersal as the adults emerge from hibernation structures in the spring,

The lady beetle life cycle involves complete metamorphosis – egg, larva, pupa, and adult. In laboratory conditions at  77 F (25 C), this cycle can take from 14 to 20 days. In natural conditions with variable temperatures (e.g., cool, wet springs) this can take up to 36 days or more. Under normal spring conditions, egg hatch can occur in 3 to 5 days, larval feeding for 12 to 14 days, and pupation for about 5 to 6 days. Once adults emerge, they can remain active from 1 to 3 years depending on site and other variables.

It has been reported that each female is capable of laying 600 to 800 eggs.  This reproductive capacity, combined with a life cycle of approximately 1 month (allowing for 5 to 6 generations per year), can lead to a very rapid population explosion if the food source is not limiting.

Multicolored Asian Lady Beetle is a voracious feeder with adults capable of eating 90 to 270 aphids per day and each larva eating 600 to 1200 aphids during its development. Large explosive populations of the beetles can often be attributed to massive abundance of prey (aphids, scales, etc) and lack of competition and natural enemies. There are very few predators or parasites that attack MALB.  This lady beetle feeds on pest species that can attack many crops – orchards, ornamentals, grain crops, and natural ecosystems such as forested areas. 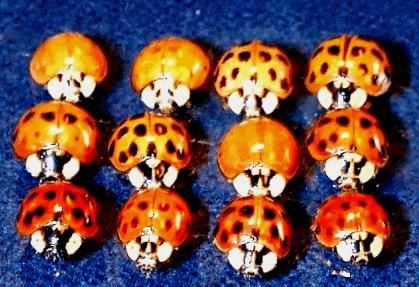 Note the many variations of color and spots  (some with no spots at all) on the wing covers, but all MALB have the distinct marking on the pronotum. In Asia, MALB has black wing covers with red spots while in North America we see them as above with red/orange wing covers with dark spots.