Kay Bogart, University of California-Davis, Department of Viticulture and Enology, and Industry Consultant

The primary advantage of plant-based monitoring to schedule irrigation is that vine performance relates directly to vine water status and only indirectly to soil water and atmospheric conditions. The vine essentially integrates its soil and atmospheric environments and reflects the prevailing conditions in growth and reproductive processes. Because the rate of expansive growth is related directly to plant water status, its measurement can yield valuable data indicative of plant growth and development. The pressure chamber, also called a pressure bomb, is an invaluable tool for monitoring winegrape vine water status and is available commercially at a reasonable cost.

Before using the pressure chamber for the first time, it is important to determine which vines will be used as sample sites. The number and placement of these vines will depend on vineyard size and type and intended use of the data. It’s important that someone with knowledge of the vineyard aid in the choice of sample sites. Usually, an average of four to six sample sites will characterize a location or block of approximately 10 to 15 acres. The actual number will vary with vineyard topography and soil consistency. The vines chosen must be clearly flagged so subsequent measurements are taken from the same vine each time. Do not choose end vines, unusually stressed or unhealthy vines. The best time of the day to check winegrape water status is the two-hour period from one hour before to one hour after solar noon. Readings should be taken on days when vines are likely to exhibit normal stress and should not be attempted on cloudy days or days when the ambient temperature exceeds 100ºF. The degree of stress indicated by the vine (called leaf water potential or LWP) and measured by the pressure chamber will allow the user to determine when to begin irrigation in the vineyard each year. It can also be used to determine the efficacy of a previously imposed irrigation strategy.

In grapes, the leaf petiole is the structure chosen to measure the vine’s moisture stress. The best leaf to choose for the test is the most recent, fully expanded leaf that has been in full sunlight for about twenty to thirty minutes. This is often the fourth or fifth leaf from the shoot tip. Prior to excising the leaf, place a small, thin plastic bag securely over the leaf to suppress transpiration after the cut. The leaf petiole is then cut with a sharp razor blade, leaving sufficient length of petiole to extend through the sealing stopper or insert in the pressure chamber cover. It is best to cut the petiole as close to the shoot as possible. The cut should be flat, as an angled or ragged cut will be more difficult to evaluate properly. 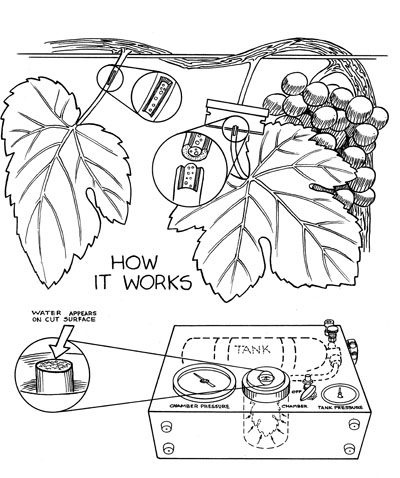 How a pressure chamber works.

After sealing the chamber, slowly begin increasing the pressure by opening the compressed nitrogen valve. It’s a very good idea to begin the pressurization slowly. This will be a pressure increase of about 8 to 10 Bars per minute, then even slower as the trigger point approaches. Slowly increasing the pressure toward the end assures the actual leaf pressure point will not be exceeded. As the pressure in the chamber equals the pressure, or tension in the leaf, the sap is forced out of the cut petiole surface. It’s very important to watch the cut surface of the sample for the appearance of the liquid, indicating the leaf water potential has been reached. It may be helpful to use a magnifying glass to see the first bubble of sap. As soon as sap starts to push out the cut end of the petiole, immediately stop increasing the pressure. Then record the corresponding pressure from the gauge. This is the leaf water potential (LWP) measured in negative (-) Bars. After the pressure has been recorded, the chamber can be exhausted.

The level of stress as gauged by the mid-day leaf water potential can be generalized as follows:

There are several ways this data can be used to schedule irrigation of winegrapes. According to recent research, the most effective way to improve red winegrape quality is by imposing early season deficits, prior to veraison. This opens up the canopy at the most opportune time for development of color, tannins and flavor compounds in both the current season and the following year’s crops, through the effects of increased solar radiation on the bud primordia. To accomplish this, it is recommended that the grower/manager refrain from irrigating at all during the season until the vines have reached a predetermined “threshold” LWP value. This threshold can vary from as little as -10 Bars for some whites to as much as -15 to -16 Bars in some reds, depending on cultivar, rootstock, soil water-holding capacity, trellising system, atmospheric conditions, and importantly, winemaking goals. A good rule of thumb would be to start at a conservative level, such as -12 Bars, in most red winegrape varieties.

Once this threshold is achieved, the amount of water to add at each event is dependent upon the goals of the irrigation strategy. In winegrapes, irrigation management can be a very effective vigor and canopy management tool. Perhaps the most efficient and easiest way to schedule irrigation post-threshold to achieve this goal is by a method called regulated deficit irrigation. This method can only be used with irrigation systems that allow the user to monitor the actual irrigation application rate, such as drip emitters. It involves monitoring all additions to and losses from a vineyard’s available water. The most important component is an accurate estimation of crop water loss, or evapotranspiration. This is a combination of water lost to transpiration from the leaves and evaporation from the soil.

In California, evapotranspiration can be fairly easily calculated using data available through a network of more than 180 weather stations throughout the state called CIMIS (California Irrigation Management Information Service) stations. These stations monitor solar radiation, soil temperature, wind speed and direction, air temperature, and humidity and precipitation amounts on a very specific grass crop beneath each station. This grass crop is maintained to highly explicit standards set by the California State Department of Water Resources, which is responsible for the weather stations. From this data, a “reference evapotranspiration” (called ETo) value is calculated by the CIMIS network. It is called “reference evapotranspiration” because it is specific to the grass crop surrounding each station. This ETo data is included in the daily CIMIS report which is available on the internet, by phone, or published in many local newspapers. It is updated and calculated hourly, but is generally printed as a daily or weekly average.

The equation for calculating full potential water use for a winegrape crop is:

To determine the crop coefficient specific to a winegrape crop, it is necessary to quantify the extent of canopy coverage by measuring the percent of land surface shaded by the vine canopy. Dr Larry Williams (see Irrigation of Winegrapes in California, Practical Winery and Vineyard, Nov/Dec 2001) demonstrated that vineyard water use increases linearly with the percent of land surface shaded by the crop. This factor allows the user to compensate for trellis configuration, row orientation and vine spacing in the conversion. So, by measuring the shade under a vine canopy at solar noon, it is possible to estimate accurately the amount of water lost to the vine. The shaded area beneath a vine can be measured in several different ways. In the first, a grid is laid out between two adjacent vines. The amount of shading per grid can then be estimated and extended to the entire surface. Another method uses commercially available software packages that enable the user to calculate the percent of shaded area using a digital photo of the vineyard. Lastly, and perhaps the most practical method, is merely using a tape measure to determine the average width of the shade by measuring the shaded area in approximately four locations between adjacent grapevines. Depending on the size of the vineyard, four to six different measurement sites should be chosen to get an accurate estimation. By the time a measure of shade is necessary, most canopies should have stopped rapid expansion (unless the vineyard is heavily fertilized or over-watered) and the shade value remains relatively consistent through harvest. If the vineyard is hedged, it may be necessary to reevaluate the shaded area. The calculation, which is easily adapted to a spreadsheet template, is described below:

Using the formula, the full amount of water lost by the vine through evapotranspiration for any given period can be accurately estimated. With this knowledge, the manager can decide what portion of the total water loss he/she chooses to replace by irrigation. A replacement of 100 percent of the water loss, for instance, would be considered full potential water use. If the manager chooses to replace 60 percent of the full water, it would be termed 60 percent regulated deficit irrigation or 60 percent RDI. In trials at the University of California, it is believed a safe, conservative level for healthy, mature vines in a region where extreme heat or gravelly soils are not factors would be about 50 to 60 percent RDI. In any region, it is always good practice to contact the local state or county farm advisor before beginning any deficit irrigation program.

Once the manager has decided when, how much, and how often to irrigate, he or she can use the pressure chamber to check the efficacy of the imposed irrigation strategy. A good rule of thumb is to check leaf water potential approximately one day prior to each subsequent irrigation event to check the efficacy of the previous event. If vines are watered more often than twice each week, it may be difficult to gauge accurately the effects of a particular irrigation. In this case, check as long as possible after one event and directly before the onset of the subsequent event to get the best estimate of the vine water status. It is also a good idea to monitor the vines more carefully during periods of environmental stress, such as extreme heat or dry winds that increase the normal vine evapotranspiration. It may be necessary to increase the amount of water added to compensate for the vine water loss in these circumstances.

In conclusion, the ability to monitor the vine’s response to its environment is key to any successful winegrape irrigation strategy. Although it is helpful to look at all the variables in the vine’s environment, the most sensitive indicator of stress is the plant itself. Using a commercially available pressure chamber allows the vineyard manager to react in a timely manner to plant-based stress level indicators. Then the amount of water to add to optimize winegrape quality can be determined from evapotranspiration data and careful monitoring of stress level indicators throughout the season. Communication between the winemaker and the grower is the key element in satisfying the goals of each.

The Evapotranspiration Method for Irrigation Scheduling

Irrigation of Winegrapes in California, Practical Winery and Vineyard, Nov/Dec 2001