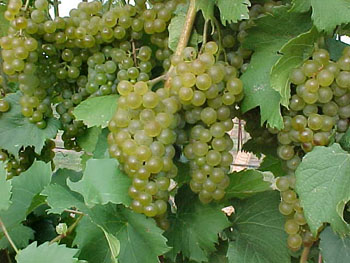 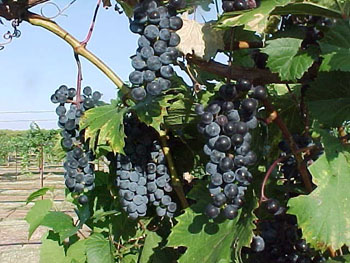 The creation of interspecific hybrid grapes primarily came about because of problems encountered in France in the 1860s. A devastating phylloxera outbreak began there around 1860 and lasted for the next 20 years. During that time, about 90 percent of French vineyards were destroyed. To combat this epidemic, cultivars derived from phylloxera-resistant American species were planted. At one time, more than 25,000 acres of the American grape ‘Noah’ were planted in France, as were other American grapes such as ‘Clinton,’ ‘Othello,’ ‘Lenoir,’ ‘Isabella,’ and ‘Herbemont.’ ‘Concord,’ ‘Catawba,’ and ‘Delaware’ were tried but had low resistance to phylloxera. The importation of these varieties also brought with them new disease problems like downy mildew and black rot. In 1876, it was found that V. vinifera cultivars could be grafted onto American grapes successfully. The discovery helped transition back to V. vinifera grapes, but diseases were also a problem. In 1885, Bordeaux mixture (lime sulfur) was discovered as a broad spectrum fungicide to help alleviate the disease problems.

French hybrids originally were developed from breeding efforts for rootstocks on which to place V. vinifera grapes. Amateur grape breeders pushed the breeding process forward to look for vines with roots resistant to phylloxera, foliage resistant to fungal pathogens, and fruit that could produce wines more similar to V. vinifera types. The first stage of breeding for hybrids used crosses of American cultivars or rootstocks with V. vinifera cultivars. This stage of breeding produced some cultivars such as ‘Baco noir’ and ‘Baco blanc.’ Some of the important American types used in the breeding process were ‘Noah’ and Jaeger 70. The V. vinifera cultivars used included ‘Folle Blanche,’ ‘Aramon,’ ‘Clairette,’ and ‘Cinsaut.’

The second wave of breeding for interspecific hybrids used crosses between hybrids gained from the first stage. Some of the influential breeders of this time period were Seibel, Bertille Seyve, Joannes Seyve, Galibert, and Landot. The third stage of hybrid breeding led to the modern hybrid grapes commonly grown today. These were usually crosses of hybrids from the second stage with V. vinifera grapes to gain superior wine quality. However, with the elevation of wine quality came the dilution of pest resistance. There are several breeding programs around the world now involved in creating high quality hybrid grapes. Some of the programs in the United States are in Arkansas, California, Florida, Georgia, Minnesota, Mississippi, New York, and North Carolina.

There are many high quality hybrid grape cultivars available, including:

Hybrid grapes make good substitutes in areas where V. vinifera grapes are marginally adapted or not adapted. The modern hybrid grapes produce high quality wines that do not include “off” flavors that are characteristic of some older hybrids. Rombough (2002) stated that hybrid grapes can be as successful as V. vinifera grapes. He wrote: “The question is one of marketing, and nothing else. Most wineries make their money from the walk-in trade. And each and every walker-in is amenable to hand-selling…it doesn’t matter what name is on the label, so long as there is quality in the bottle.”

Adaptation and quality are important aspects to consider when deciding what type of grapes to grow. Just because V. vinifera cultivars like ‘Pinot noir’ or ‘Zinfandel’ make exceptional wines in some locations does not necessarily mean they will make good wines elsewhere.