The head-trained, spur-pruned training system was the earliest training system employed in California. Traditionally it was used in the coastal vineyards as well as in the foothills and interior valleys because it was inexpensive and easy to manage. Because wire either was not available or was prohibitively expensive, the system relied on a simple split redwood stake at each vine. An additional advantage to this system, prior to the availability of herbicides, was that it could be cross-cultivated for weed control, a very important water conservation tool in non-irrigated vineyards. This system is still used today, in particular by growers of Zinfandel, who believe  it is ideally suited to production of low to moderate quantities of high quality grapes. 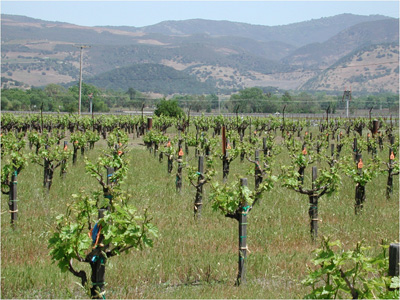 In this system, vines are trained to a wooden stake positioned at each vine. The stake is generally 3 to 4 ft above the soil surface. Research has shown by increasing head height yield is increased within this system, as shoots are able to grow longer and provide more leaf area. However, if maximizing yield is the main goal of production, other training systems would be used.

As with many other systems, there are several decisions that must be made early during establishment that depend on site and vineyard design conditions. The first consideration is whether vines will be trained the year they are planted or the second year. If planting material is of high quality and the soil is deep and fertile, vines can be trained during the first year. If planting material is average and/or the site has moderate growth potential, vines should be allowed to grow the first year without training in order to develop a strong root system. In the year of training, vines are pruned to a single two-bud spur. When growth commences, two shoots are selected and the remaining shoots are removed. The two shoots selected are then trained up the stake and tied loosely to provide support but prevent girdling. As soon as the shoots have been tied several times and wind breakage is no longer a risk, the shorter of the two shoots should be removed so that the resources available to the vine can be used to invigorate growth of the remaining shoot. If summer laterals develop on this remaining shoot, they are to be removed to allow vertical growth of this shoot which is being grown as the main trunk.

If the growth of the trained shoot reaches a point about 18 in (45 cm) above the stake, the shoot will be cut at the top of the stake. The decision one must make in using this training system is to consider  the time of year when this growth occurs. If it is relatively early in the growing season when shoots reach the top of the stake (June-July), one can cut (or “top”) the shoot at that time. However, if the shoot does not reach the top of the stake until late (August-September), delay cutting the shoot until winter pruning. When cutting (or “topping”) the green shoot or dormant cane, it is critical that the cut is made at the first bud just below the top of the stake, and the cut should be made on a diagonal through the node so that the bud is cut away but the swelled portion of the cane at the node is retained. This top position is tied tightly to the top of the stake. By retaining the swelled node, the cane can be tied tightly with no fear of girdling a desired spur position, and the cane is prevented from pulling away from the stake during subsequent growth. If growth at the top of the stake is not at least the diameter of a pencil (3/8 inch), the shoot should not be topped. At winter pruning, the dormant cane should be pruned back to a point where the cane is 3/8 inch in diameter. If you have very poor growth much lower than the top of the stake, you should prune the cane back to a two-bud spur and begin training the shoots that grow up the stake in the following growing season. 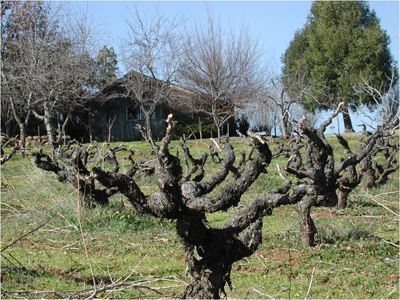 During the spring following the topping, all buds on the trained shoots will begin to grow. At this point, you must determine how many of these buds to retain. In cases where growth was moderate, the top five or six shoots are retained and lower shoots are removed. If growth was greater, as many as eight shoots can be retained. These shoots will form the initial spur positions of the head-trained vine and will be pruned to two buds the following winter. As additional spurs are retained at the top of the vine, the lowest spurs can be removed. Ideally, when a head-trained, spur-pruned system is fully developed, all of the spur positions will be at the same height near the level of the top of the stake and will be uniformly arranged in a radial alignment, like spokes on a wheel (see photo). Therefore, transitioning from the initial vertical arrangement of spurs to a final horizontal arrangement will take a few years.

During this transition, two critical operations must be performed. First, the vine must be tied very tight to the top of the stake at that final swelled node position above the top retained spur. As growth occurs, the trunk will exert strong pressure to pull away from the stake and will be prone to breaking or will create a crooked trunk prone to being hit by equipment. Second, the transition from spurs on the vertical axis to the horizontal arrangement must not be done too quickly. Sufficient girth must be attained by the top of the trunk in order to support the shoots and fruit that develop on the upper spurs. In many vineyards, heads have been broken when uppermost ties have failed or when too much fruit weight was placed on small trunks. In all cases, any ties around the trunk below the highest very tight tie should be loose enough to allow for vine growth without girdling the trunk. As the trunk gains significant diameter, it gains more support and loose ties are sufficient to keep the trunk straight.

During training, it is important to determine the level of crop production or yield, year by year. Early in development all clusters are removed prior to flowering. However, as development progresses, some crop can be retained, starting with one cluster per shoot. How soon in the vine’s life a vineyard can carry a full crop (full yield) depends on growth induced by site, rootstock and cultural practices. If vines are allowed to yield a full crop too early, shoot growth will be depressed as evidenced by short shoots (<3 ft) with small diameter. If vines are allowed to grow with too little crop, shoot growth will be excessive (> 4 ft).

Once vines are fully trained and developed, head-trained vines require custom canopy management practices. The initial close arrangement of spurs at the top of the canopy can result in the heads being congested with growth, resulting in high humidity and an elevated risk of fungal diseases. Shoot thinning is generally practiced to keep the heads open as well as removal of summer laterals. However, leaf removal must be practiced with great caution because, with the horizontal nature of the shoot growth, there is little canopy above the clusters. If too many leaves are removed, exposed grapes may be subject to sunburn. If leaves are removed, the general recommendation is to do so very judiciously and early in the season, between berry set and pea sized berrie, so that clusters can acclimate to the exposed conditions.

Because of the radial arrangement of spurs, some shoots will be growing into the inter-row area and are prone to breakage by passing equipment. At close row spacing, the vineyard may become impassable at some point in the growing season.

In California, drip irrigation is usually installed in head-trained vineyards as cross-cultivation is rarely practiced today. The tubing is attached to a wire fastened to the stakes, or in some instances is buried near the vine row.