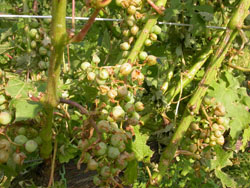 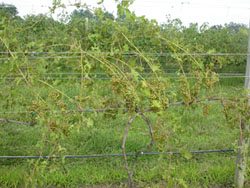 Hail is generally associated with spring thunderstorms but may occur at any time of year. Hail is formed in huge thunderhead (cumulonimbus) clouds (Munez, 2000). During days when the soil is heated by the sun, the air near the ground also is heated. Hot air is much lighter than cold air, so it rises and cools as it comes in contact with the colder air. Hot air’s capacity for holding moisture decreases as it cools. When the warm air has cooled to a degree that it can’t maintain its moisture, the water vapor condenses and forms clouds. The moisture that is condensed during the process of cooling releases heat into the surrounding air, thus causing the warm air to rise faster and release more moisture.

Thunderhead clouds contain a tremendous amount of wind energy. These winds are called updrafts and downdrafts. Hail forms in the cloud’s main updraft winds in the form of supercooled water. This water stays in a liquid form even though its temperature is below freezing. To become a solid, supercooled water needs something on which to freeze. Things like ice crystals, dust, and salt particles (from ocean moisture) also may exist in these thunderheads. Upon impact with these other solid particles, supercooled water will freeze, creating a hailstone. The more supercooled water a hailstone comes into contact with, the heavier the hailstone will become. It will fall from the clouds once it becomes too heavy to be maintained within the updraft winds. 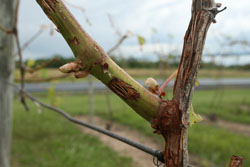 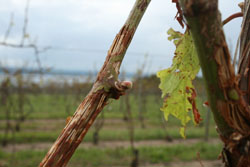 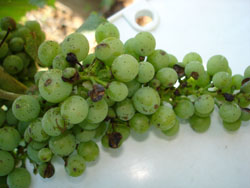 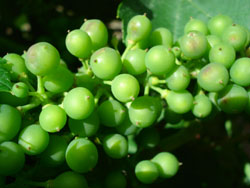 Hail can do considerable damage to grapevines by damaging bark, leaves, and fruit. Hail also can cause significant injury to young, thin-barked vines; the falling hailstones create wounds that compromise the bark of the vine. A wound is considered any break in the outer protective bark of the tree that exposes the xylem. After this occurs, new space and nutrients become available to a number of organisms, including insects and pathogens. At the same time, the wood cells are reacting to these new invaders and a chemical barrier is formed of mainly phenolic compounds. Most of the time, the vine (if in good health prior to the wounding event) will be able to close a wound caused by hail and contain any infection.

When perennial plants, such as grapevines, are wounded, they can react to form physical and chemical barriers that contain the injured area (Harris, 1992). The term “healing” is a misnomer when it comes to woody plants. The plant tissues that have been injured are not replaced or repaired (in most cases) to their previous condition. It is instead confined with a closure called callus tissue.

Grapevines are a fairly vigorous (fast-growing) species, and the rate of wound closure is correlated with vine vigor. Callus formation is faster when vines are vigorous and practices that encourage vigor help speed the wound closure process as well as prevent decay. Vigor also can be positively influenced by proper management through fertilization, irrigation, pest control, and crop load management.

The time it takes for a wound to close also depends on where on the vine the wound is located, when the injury occurred, and what was exposed by the wound. Callus formation is primarily observed from the sides of a wound and less so from the top or bottom. Research on tree species has found that the shape of the wound isn’t much of a factor when it comes to rate of closure (Neely, 1970), but size of the wound is important. Wounds that occur late in the growing season may be infected more rapidly because of coinciding sporulation of fungal populations (Felix and Shigo, 1977).

When hail damage occurs to fruit, the results can be devastating. Hail damage during early stages of fruit set can cause scarring or berry loss. Hail at or after veraison will lead to fruit rots. Defoliation also may occur from hail and in severe instances can lead to a delay in fruit maturation and excess lateral shoot development. In rare instances, retraining of vine parts may be necessary if damage is extensive.

Hail can cause wounds that harm young grapevines, but unless the damage is extensive the vine will often recover quickly. Mature vines that are well cared for and properly managed should close wounds quickly and without long-term effects. Early-season injury allows time for regrowth from latent, secondary and lateral buds, with minimal effect on bud fruitfulness or return crop. Dormant pruning may need to be adjusted to obtain sufficient buds in appropriate locations for next year’s crop, and growers may wish to retain some extra buds to compensate for mid-season or later injury. Because hail injury is both unpredictable and localized, it is not something for which growers can prepare. Crop insurance is recommended as a means to reduce risk associated with hail and other weather-related injuries.