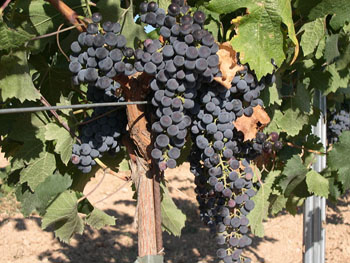 A very popular red grape that can be used as a varietal wine or in a blend. It has thinner skin and milder tannins. Historically, Merlot was primarily used for blending with Cabernet Sauvignon and other Bordeaux varieties to add softness and fruit complexity, shorten aging requirements, and to hedge the risk of cool, late-ripening conditions in Bordeaux. In recent years it has also become popular as a full-bodied, high-quality varietal wine that can be marketed sooner than Cabernet Sauvignon.

Little is known of the origin of the variety, but it has been cultivated in the Bordeaux region of France since the eighteenth century. The first true botanical description was in 1854 by V. Rendue who described it favorably for blending with Malbec and Cabernet Sauvignon and as a component of the great wines of Medoc. A resurgence of planting in France since the 1970s, particularly in the south, makes it the third most planted black variety there. It is also widely planted in Italy, Central Europe, and South America.

This vine is susceptible to winter injury. Budbreak is fairly early and is thus susceptible to frost in the spring. Fruit is susceptible to disease. Merlot has medium-high vigor and a trailing growth habit. Excess vigor quickly creates a dense canopy due to lateral shoot development. It is adapted to cool to warm climate regions. Merlot does well on deep, sandy loam or well-drained soils that have good moisture-holding capacity.

Merlot is susceptible to poor fruit set if cool weather occurs during bloom, which often contributes to seasonal variations in productivity. Its own-rooted vines tend to accumulate high levels of nitrogen compounds, including nitrates, during bloom, especially during cool weather. Thus, judicious and moderate nitrogen fertilization is recommended; post-bloom applications are advisable. The use of resistant rootstocks tends to minimize or even eliminate this problem. Merlot is somewhat sensitive to soil problems that involve zinc deficiency, salinity, and cold, excessively wet conditions.

In the northeast US

Merlot has produced superior wines in New York. However, it has a very long vegetative growth cycle and tends to produce dense, shaded canopies. This leads to bunch rot and reduced winter cold tolerance. It is not recommended for any but the most favored sites in New York.

In the southeast US

Merlot can be grown in the milder growing areas in the northwestern piedmont of North Carolina, as this area is less prone to winter injury than in Virginia or areas further west and north of this region in North Carolina. Still, it should be planted on more protected sites. Merlot is a leading vinifera variety in the Yadkin Valley, which is North Carolina’s first federally recognized American Viticultural Area. Merlot acreage is currently similar to that of Cabernet franc.

In the mid-Atlantic US

For those fortunate enough to be able to grow and crop Merlot, the rewards have often been outstanding wine quality. Merlot is quite sensitive to cold injury and crown gall and can be recommended only for those few excellent sites where experience has demonstrated that winter injury is not a serious threat. Much of the commonly available stock is infected with leafroll virus. Merlot fruit is highly susceptible to bunch rots, which often necessitates early harvesting and less than optimal fruit quality.

It is in good demand and has good yields. Budbreak is early, just after Chardonnay, and harvest is in early to mid-September. Its susceptibility to disease is similar to Chardonnay, but it is more resistant to bitter rot. It can be very vigorous and divided canopy training systems are recommended.

Antoine Delmas imported the first vines to California in the 1850s; only a few acres existed after Repeal. It was included in the California planting boom of the 1970s, and plantings soared after 1987. Merlot acreage grew faster than that of any other world-class variety in the 10 years that followed with the exception of Viognier.