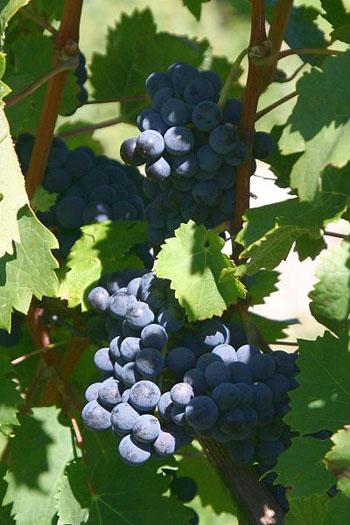 A popular red winegrape. Can be considered the most suitable red vinifera variety in very cool climates. It is a parent to Cabernet Sauvignon, and it is the preferred red grape variety in one of France’s most northern grape growing areas, the Loire Valley, because it is the most cold hardy V. vinifera variety. The fruit ripens earlier and may produce good-quality wines more consistently than Cabernet Sauvignon.

Budbreak is average between Chardonnay (early) and Cabernet Sauvignon (late) in Oklahoma, and therefore can be susceptible to frost damage. Vine tends to be more cold hardy than Cabernet Sauvignon, but is highly vigorous and fruit does not tend to ripen evenly. Not recommended for Oklahoma, but may be the most suitable red vinifera for cool climates.

Cabernet Franc should be considered as an alternative or a supplement to Cabernet Sauvignon. It is the most cold hardy Vitis vinifera variety tested in this region. The fruit ripens earlier and has produced quality wines more consistently than that of Cabernet Sauvignon. Care must be taken to manage vine vigor, crop load and canopy density to reduce the occurrence of methoxypyrazines that cause “bell pepper” aromas in the wine.

In the midwest U.S.

Cabernet Franc is one of the best red vinifera varieties for the Ohio River Valley and Great Lakes Region. It is cold hardy enough for good sites and ripens dependably in most years. In more southerly areas with warmer growing seasons, it tends to lack color and may not be the best choice.

This variety has steadily gained popularity in the east. It breaks bud earlier than Cabernet Sauvignon and ripens a week earlier—in mid-September in North Carolina. The earlier budbreak may be a concern on more frost-prone sites. The vine has a greater cold hardiness than Cabernet Sauvignon. The fruit has some rot resistance and yields are good. It is highly vigorous, requiring wider spacing and/or divided canopy training. Demand is currently high.

Cabernet Franc has gained acreage in this region within the last few years.

STRENGTHS. Cabernet Franc produces good yields if properly managed. The fruit has good rot resistance. Fruit ripens 3 days to 10 days earlier than Cabernet Sauvignon and is fairly resistant to bunch rots. Cabernet Franc is a relative newcomer to Virginia viticulture, but demand for the fruit is anticipated to remain steady or increase in future years.

WEAKNESSES. Vegetative growth is often excessive. Leafroll virus is prevalent in much of the propagative stock and can reduce yields, fruit quality, and perhaps the cold hardiness of affected vines. Leafroll is present in as much as 30 percent of the commonly available Cabernet Franc planting stock. Leafroll symptoms become obvious in mid- to late-summer as a downward rolling of leaf margins and a reddening of the interveinal regions of leaves. It is advisable to seek disease-free certified nursery stock or to collect budwood from vines that were marked during the growing season as being visually free of leafroll symptoms. The purchase of “certified disease-free” nursery stock has not always prevented the introduction of leafroll-affected vines. As with Cabernet Sauvignon, bunch stem necrosis can reduce yields.

This can be a higher-yielding variety than Cabernet Sauvignon due to greater fruit set. Late and uneven veraison is common, thus cluster thinning at this time is usually warranted to enhance ripening uniformity. Occasionally set may be reduced by shelling (shatter); however, this occurs much less severely than in Merlot or Cabernet Sauvignon.