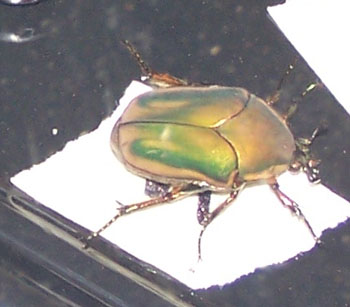 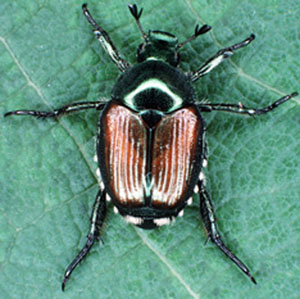 Green June beetles damage clusters by feeding on ripening berries. Beetles gain entry into undamaged fruit by gouging with the horn on the front of the head, then feeding on the flesh of the fruit. Their odor and excrement may ruin fruit even if feeding damage is not severe.

The grubs of Japanese beetles feed primarily on the roots of grasses and leaves as well as flowers. Adult beetles eat the leaf tissue between the veins, so the foliage looks somewhat lace-like.

Adults of both species can be effectively trapped using either a specialized trap and pheromone source for the Japanese beetle (JB) or a ripe, cut fruit trap for green June beetle (GJB). Set GJB traps adjacent to vineyards and monitor regularly for activity; however, if harvest of grapes is not delayed and fruit does not become overly ripe before being picked, then problems with this insect are minimal.

Use of traps for JB iscontroversial. Some believe that the pheromone traps lure more beetles to the area. They should be placed a minimum of 200 feet away from grapes, in order to avoid attracting the pests into the vineyard. Detecting damage is not a problem, as skeletonized leaves are obvious. In areas with high populations of JB, insecticidal control may be necessary. Infestation is often along edge rows or ends of rows, where adults emerge from grassy areas outside the vineyard and move to the first few vines to feed. Consequently, spot spraying may be adequate. Insecticides with long residual activity are needed when beetle populations are high. Repeat applications may be needed.

These two species are both scarab beetles that overwinter as larvae either in pastures or in grasses. They pupate in the soil sometime in late May and emerge as adults in late June. In July and August, they lay eggs and the cycle repeats itself.

Japanese beetles have been steadily migrating west from their entry point on the east coast. They have been common in the Midwest since the early 1990s. In some years, their populations are so high that almost complete defoliation of preferred hosts is possible.

As the grape industries grow on the western boundary of Japanese beetle infected areas, they may experience more pronounced problems with this insect. The GJB is a common pest of most fruits in Midwest, feeding on sweet sap as any of these fruits begin to ripen.

Japanese Beetles in the Urban Landscape, University of Kentucky