Carbon and sugars produced through photosynthesis, along with minerals from the soil, are allocated from ‘sources’ (active leaves) to ‘sinks’ to support vine growth, fruit development, and maintenance of the vine’s permanent structure (trunks, canes and roots). Where this photosynthate is allocated varies according to the time of the season and needs of the vines. Put another way, the strength of the various sinks to which photosynthates are allocated varies during seasonal vine development. It also is affected by nutrient availability and soil fertility, vine water status, additional stressors such as insects and disease, and crop load – the ratio of fruit to active leaf area. Understanding how allocation of photosynthate shifts over the growing season underpins many of the viticultural practices aimed at influencing vine growth and fruit development.

Early vine growth relies on carbohydrate and nitrogen reserves stored in woody tissues, canes and roots. Starches are mobilized, first from the canes, cordons, and trunk, then from the roots, to the developing shoot tips until mature leaves are capable of becoming net exporters of photosynthate to support further shoot growth and development.

After flowers are pollinated and begin to set fruit, photosynthate allocation begins to transition from shoot tips to fruit clusters to support fruit growth. In addition, bloom is when the buds for next year’s crop start to form. By this time, reserves are largely depleted, and the vine becomes dependent solely on this year’s canopy to support further canopy development and shoot growth — as well as cluster development. Shoot tips and fruit compete as sinks for photosynthate. As evidence, it’s well known that if shoot tips are removed around bloom, increased allocation of photosynthate to clusters can increase fruit set, as the competing shoot tip sinks are temporarily eliminated.

By fruit set, berries have already undergone cell division in their ovaries, and have about one-third of their final number of cells. Berries continue their development through cell division, while canopy development and root growth continues.

About a month after bloom, there is a temporary ‘lag’ in berry growth. At this time, cell division in berries is largely complete, and seeds are beginning to form within the ovaries of the berries. After this point, berries continue to grow through cell enlargement, and berries and seeds constitute an increasingly strong sink for photosynthate. Shoot growth should slow dramatically as more of the photosynthate is allocated to developing clusters.

Veraíson signals the start of fruit ripening. Fruit composition starts to change. There is a rapid expansion of berry volume and accumulation of soluble solids. Cells, which before veraíson expand through import of water through the xylem, continue expansion with water and solutes imported through the phloem. Acids – largely malate before veraíson — reach their peak at veraíson and get broken down via respiration, simultaneously with increased sugar accumulation. At this point, vines have a full canopy, and the developing and ripening fruit is the overwhelming sink for photosynthate produced by the leaves.

Also after veraíson, shoots begin to turn brown from the base of the shoot outward, as the water-resistant periderm forms. As the leaves start to senesce, carbon and nitrogen from leaves is mobilized out of them to support both fruit development and storage of reserves in canes, trunks and roots of the vine.

Once the crop is removed, photosynthate produced by remaining leaves is converted to starches and moved into permanent parts of the vine for storage, which will again support early shoot growth and development during the next growing season.

Understanding this seasonal cycle of allocation helps explain seasonal variation in vine growth, the impact of stressors, and the effect of nutrient availability on various processes in the vineyard.

Water relations: Water stress from fruit set through the lag phase can limit cell division, shoot growth, and berry size. For wine grapes (and particularly reds), moderate stress at this time is often viewed as a positive – that limits excess vigor and shading, and facilitates the transition from vegetative growth to fruit development. For red varieties, smaller berries resulting from water stress increase the skin-to-pulp ratio, resulting in wines with deeper color and more concentrated flavors. 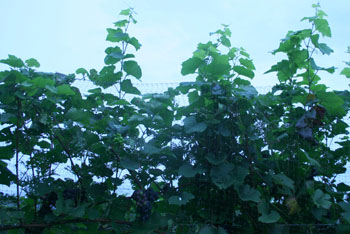 Active leaf area after harvest: A fundamental difference between cool and hot climate growing regions is the amount of time that active leaves remain on the vine after harvest. Warm-climate growers almost always have an extended amount of time after harvest with active leaves. In cooler climates, the amount of time that a grapevine canopy remains active after harvest is limited – and sometimes nonexistent. Removing the sink of ripening grape clusters redirects photosynthate towards replenishing vine reserves and supporting acclimation to winter low temperatures. This critical post-harvest time influences how resistant vines are to low winter temperatures and how early-season growth will progress in the following year.

Vine balance: Finally, understanding carbon partitioning provides key insights into the concept of vine balance – that is, managing cropping levels and vine growth so that both are in balance with each other. Overcropped vines have more fruit and less leaf area to support development. At best, the finite amount of carbon produced by leaves is divided among too many clusters. At worst, overcropping also results in fewer leaves — and less photosynthate — to support a larger crop. Delayed maturity and unripe fruit can be results of a poorly balanced vine. Undercropped vines allocate too much photosynthate to vegetative growth. Without the sink of developing clusters to slow down shoot growth, canopies become dense and shaded — and often don’t stop growing until late in the season.

Understanding sources and sinks for carbon that leaves produce, and how they vary in time and in response to environment and vine management, is a key to effective vineyard management.