What is Grapevine Bleeding?

Removal of water from the soil by epidermal cells of roots and movement into xylem under pressure will produce a phenomenon known as “bleeding”. Bleeding contains sap that flows when the xylem tissues in the canes have been severed. It is thought to be caused by positive root pressure due to the reactivation of the roots in the spring.

Pruning of grapes in early spring before budbreak may lead to bleeding. Bleeding exudates contain plant hormones (cytokinin and gibberelin), sugars, amino acids, and mineral nutrients. The hormones help to regulate budbreak and early growth of the vine.

Bleeding can occur at any time of active growth, especially if heavy pruning is done. When the soil temperature reaches 45 to 48°F, active root growth begins, leading to a surge in xylem activity. Bleeding usually occurs during dormancy only if sufficient soil moisture is available to the root system. In dry years, vines may not bleed when pruned. This could be due to insufficient water reserves or it could be due to severe cold damage to the xylem.

The Science Behind Bleeding

The vast majority of water uptake by a grapevine is through the root system. In actively growing vines, water is lost through transpiration, therefore the water must be continually replaced. This process occurs through absorption by the roots into the xylem. The mechanism by which water is constantly drawn into the vines depends on transpiration, which causes diffusive pressure, allowing the plant to overcome the surface tension of water in the soil. The water is drawn into the vine via the roots and transported in the xylem from cell to cell up to the aerial portions of the vine. 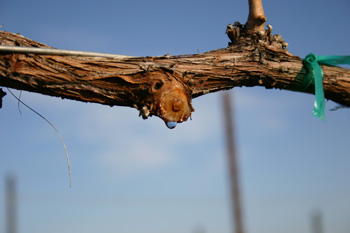 Bleeding of a grapevine after a pruning cut has been made. Photo by Mercy Olmstead, University of Florida.

Water can also be brought into the vine even when the transpirational pressure is low (e.g., at night or during periods of high humidity). This occurs through osmosis. When the osmotic pressure of the root cells is greater than the soil moisture in the rhizosphere, moisture then moves into the epidermal cells of the vine roots.

The overall rate of absorption has many influencing factors, including the growth and extent of the root system and transpiration of the canopy. Unless sufficient moisture is consistently added to the rooting zone, the vine’s root system must expand and explore areas where more soil moisture can be extracted.

What to Do about It

There is no evidence that bleeding is harmful to the vine and is a normal process. In fact, it can push out air bubbles in the xylem (embolisms) that form during the winter. These air bubbles have the potential to disrupt water flow in the xylem up to the shoots. However, grapevine bleeding can be detrimental to the success of field grafts. Field grafting is typically done in the spring when the vine will be most likely to bleed. Excessive bleeding can interfere with successful cambium contact of the scion and rootstock. To reduce bleeding at the proposed grafting site, incisions should be made at the base of the vine, one on each side of the vine just into the cambium. These cuts will divert the bleeding from the graft site to the base of the trunk. Even after grafting, the graft site should be monitored for bleeding. Additional relief cuts near the base of the trunk may be necessary.