Grape rust mite (Calepitrimerus vitis Nalepa), an Eriophyid mite species, is known to be problematic in some grape-growing regions of the Pacific Northwest. Grape rust mites are obligate pests of Vitis vinifera grapes. Because of their economic damage potential, the mite now holds a permanent pest status in many grape-growing regions of the world including Germany, France, Spain, Switzerland, Italy, Brazil, Australia, and the Pacific Northwest of the USA (Bernard et al., 2005; Duso et al., 2010; Walton et al., 2007). 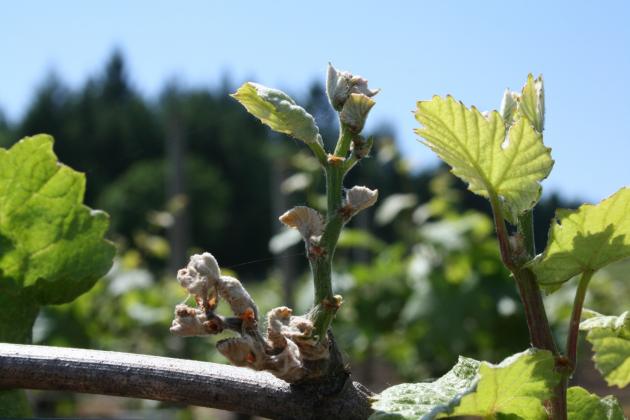 Deformed and stunted shoots of Pinot noir grapevines in early spring are shown (center). A normal shoot (right) is visible on the same vine. Stunted shoots are often white due to profuse plant hairs and lack of leaf development. The severely damage shoots have arrested development and will often abscise. Photo by Patty Skinkis, Oregon State University.

Grape rust mites are very small (0.15 mm or 1/100 inch long). They are phytophagous (feed on plants), preferring to feed on young grape tissues in early spring, causing damage that leads to deformation of shoots and leaves and results in surface necrosis described as scarring. It is believed that mites prefer newly developed tissues, potentially due to higher nutrient concentrations; however, this preference is not verified. The mite feeds on plant cells by inserting its stylet (mouthparts) into a cell and consuming its contents, taking 10 to 20 minutes to feed. The saliva of some Eriophyid mite species is found to contain plant hormones such as auxin and cytokinin analogs. When deposited onto or into plant cells, these hormones cause deformities in expanding plant tissue (Petanović and Kielkiewicz, 2010). Generally, rust mites are found to feed only on cells in the epidermal (surface) layers of tissues, never penetrating the phloem layer.

It may seem unlikely that rust mites will cause much damage by feeding on individual cells. However, large populations in small areas of tissues such as buds and young shoots can cause significant damage such as reduced photosynthetic efficiency and stunted growth. The wound signal responses of the plant trigger feeding by other Eriophyid mites and activity of predatory insects and mites (Petanović and Kielkiewicz, 2010). Rust mite damage is greatest in cool regions and cool springs when mite populations are active on slowly developing shoots. In warmer grape-growing regions, faster shoot growth likely helps prevent major damage caused by rust mites (Walton et al., 2007). 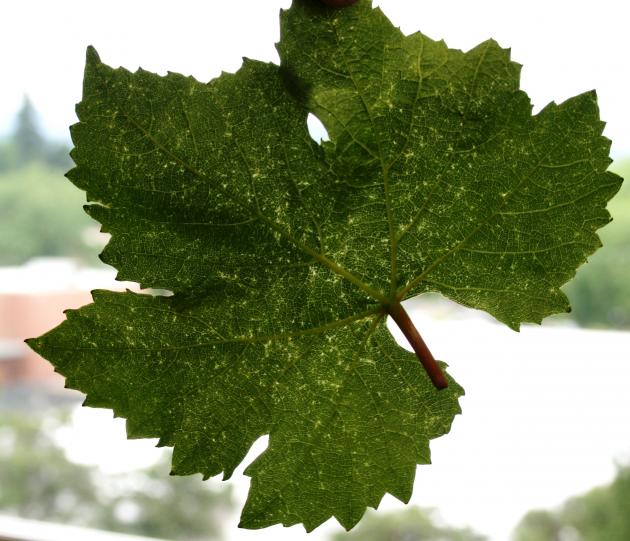 Leaf stippling is one of the first visible signs of rust mite feeding in the vine canopy during early to mid-summer. Stippling looks like tiny translucent dots the size of pin holes on the leaf. The higher the rust mite number per leaf, the more severe the stippling. Photo by Patty Skinkis, Oregon State University. 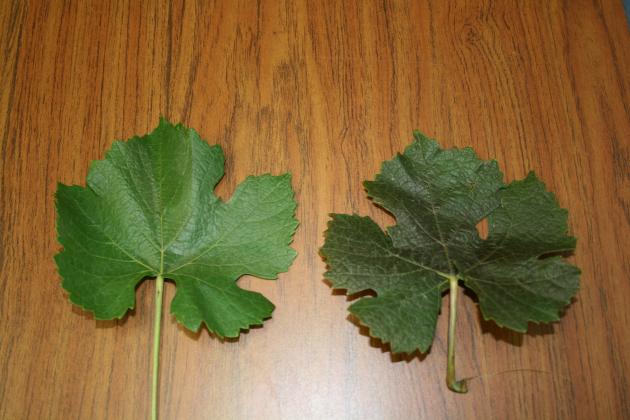 When present in high populations on young tissues (small shoots and leaves) in spring, rust mites can cause significant damage. Stunting is a common symptom with spring feeding, and damage is most visible prior to the eight to ten leaf stage of development. Symptoms associated with rust mite feeding change as the vine growth advances throughout the season:

Vines can outgrow the stunting by mid- to late spring and normal growth ensues. However, vines with particularly high populations of rust mites early in the growing season may have severely damaged shoots which give rise to secondary shoot development, damaged shoot tips and damaged flowers. In these cases, there can be reduced canopy development and yields. Vineyards that have high populations of rust mites arise in the canopy during the summer may have leaf stippling and eventually discolored/bronzed leaves. This discoloration appears to be dependent on climate and pest population density. Stippling often is first observed then discoloration may occur. This discoloration often begins as a dark green-purple in vineyards of Oregon’ s Willamette Valley and may change to bronze-red later in the season. This can be an indicator of potentially high populations of mites moving into overwintering sites that may cause damage the following spring. In some cases, we have observed high populations of rust mites without discolored leaf tissue. 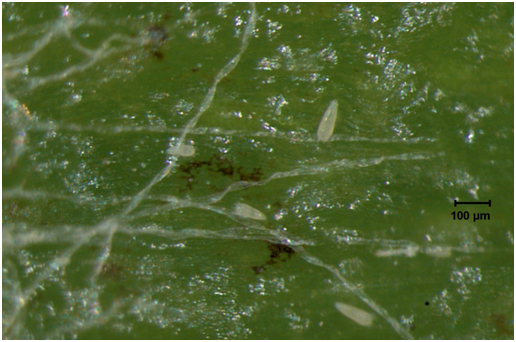 Grape rust mites are shown here on the stem tissue of a young shoot in spring. Photo by R. Paul Schreiner, USDA-ARS.

It is critical to determine if mites are present and causing damage before implementing management practices, particularly the use of insecticides or miticides. Many factors can contribute to stunted growth during spring, including apical dominance, frost, cold damage, thrips, phylloxera, nutrient deficiency, compromised graft union, crown gall, trunk diseases, damaged roots, and low carbohydrates in storage reserves. Verifying mite presence in vineyards will require systematic collection of shoots and scanning the surfaces with a dissecting microscope. These mites are very small (0.15 mm or 0.001 inch long) and difficult to see without at least 40 X magnification (60 X to 80 X magnification is best for verifying the presence of rust mites).

There are a number of time points at which to sample tissues: dormant wood (buds, under bark of canes, trunk head), shoots/leaves in early spring, and leaves in summer. Mites are known to overwinter in outer bud scales and may be found by peeling back those scales on dormant shoots. You may also consider looking under bark of the trunk, cordon, and canes. It is likely that higher mite populations are under the bark in comparison to outer bud scales, and sampling these areas may suggest better estimates of mite density. Spring is the best time to scout for mites by observing presence on young, newly emerging shoots. Mites are more easily observed under the microscope on small shoots in early spring than on larger shoots later in the season as there is less surface area to scan. Mites have been observed on nearly all areas of the shoot of infested vines, including leaves, stems, shoot tips, and inflorescences. However, there is often higher incidence and density of mites on the basal one to two leaves. Grape rust mites are typically found on the underside of leaves but have been found on the leaf surface, particularly in severely high infestations. Rust mites tend to hide under thick mats of plant hairs located near veins that merge near the petiole end of the leaf. These plant hairs must be removed with a tweezer to see the mites underneath. During summer, leaves are collected and scanned under magnification. There is much more surface area to scan through, making it difficult to determine population density, but scanning leaves can help detect the presence of mites. More recently, we developed a user-friendly washing technique that allows the majority (85%) of these mites to be washed from the leaf surface, placed in a petri dish, and observed under a dissecting microscope. To learn more about this process, please see “Recommended Resources” below.

Knowing what to look for
Under magnification, grape rust mite looks like a wedge-shaped rice grain with four legs on the anterior portion of the body. The posterior of the body is tapered while the anterior is more broad and angular. Depending on age, grape rust mites vary in size and color. Younger mites look white and become more amber as they age. Mite eggs can be found around adult mites, and they are spherical and clear to translucent white. 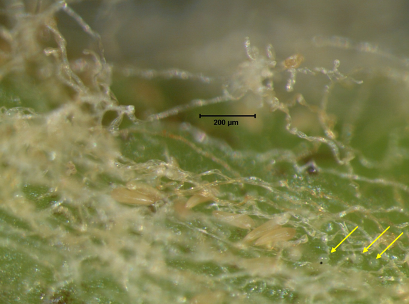 A cluster of grape rust mites can be seen surrounded by plant hairs that are prolific on young leaf tissues in the early season. Eggs are translucent white and can be best seen in the lower right-hand corner of the image (yellow arrows). This photo was taken at 80 X magnification. Photo by R. Paul Schreiner, USDA-ARS.

Infestation thresholds
While scouting for rust mites will give you an idea of pest presence, it is hard to determine a damage threshold. There are few data available to indicate economic threshold levels of the mites from in-season or dormant-season monitoring. However, approximately 400 to 1000 mites per spur were found to cause significant damage to leaves and shoots in Australia, based on sticky tape traps intercepting mite migration from overwintering sites in spring (Bernard et al., 2005). More recently, we have found very high infestations in buds (>500 per bud) in some infested vineyards in the Willamette Valley of Oregon, but they do not always lead to damage the following spring.

During the past five years, research has been conducted on grape rust mite in Oregon to better understand pest infestation and damage. Presence of grape rust mite and associated feeding damage has been largely associated with young vineyards (less than three years old) in the coolest growing regions in western Oregon. Similarly, presence of the rust mite has been linked to young vineyards (one to two years old) in Europe (Zandigiacomo and Frausin, 1998). These findings suggest that nursery stock may already be infested with Eriophyid mites at planting. However, there are instances where mature vineyards are infested with grape rust mites, and in both young and mature vineyards, within-vineyard patterns of infestation appear random and clustered. This distribution pattern may be due to grape rust mite’s mechanism of dispersal. Grape rust mites can move within the vine canopy, by wind, and by human carriers. Mites are most effectively moved by wind, followed by movement from vineyard laborers (Duso et al., 2010; Michalska et al., 2010).

Behavioral research indicates that mites have the ability to distinguish between host and non-host plants. If grape rust mites are on a host vine, they are able to feed and move more slowly than if they were on a non-host plant (Michalska et al., 2010). However, their ability to “choose” a particular vine or vineyard is not understood. The issue of host choice may be a combination of mite preference and other factors such as population magnification in the proper environment, loss of natural predators, and vine physiological factors, rather than the attraction of large mite populations to a given vineyard site.

Early-season feeding by grape rust mites has been effectively managed by using appropriately timed sulfur applications at the delayed dormant (woolly bud) stage and another spray applied at bud break (Bernard et al., 2005). However, this spray strategy is not effective if cool, rainy weather persists. During conditions of cool weather, growth of tissues is very slow, potentially leading to compounded effects of mite feeding.

Because mite presence later in the growing season may not cause visual symptoms, it is difficult to determine if sprays are warranted unless mites are monitored and damage thresholds are determined. Late-season sprays have not been effective in managing pest populations because by mid- to late summer, mites make their way into overwintering sites (bud scales of canes and bark of vine heads, cordons, and trunks) and, thus are already protected.

During the growing season, miticides are generally avoided to prevent significant reductions in populations of predatory mites, which can help control this pest mite. Sulfur sprays applied to vineyards as fungicides may also help reduce summer grape rust mite numbers; however, populations can increase once these sprays are stopped and alternative fungicides are used.