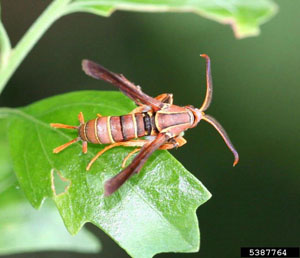 Many “look-a-like” moths and even red wasps resemble grape root borers (Vitacea polistiformis), making this a difficult pest to monitor. These similar species include dogwood borers, oak borers, and lilac borers. The former two species have relatively clear wings (both fore and hind wings) and many yellow stripes or patches along the top of the abdomen. The lilac borer possesses darker wings, but lacks any yellow patches on the abdomen. Male grape root borers are characterized by the unique presence of four pencil-like tufts on the tip of the abdomen; however, these are probably not retained in sticky trap specimens. Grape root borer also possesses one single yellow stripe across the back, near the base of one of the first abdominal segments. In addition, the grape root borer has a dark forewing and clear hindwing. Grape root borer is found throughout the eastern United States from Pennsylvania and Ohio south but is much more prevalent in southern states.

The damaging stage of grape root borer is the larva, which tunnels into the grape root. Infested roots contain tunnels filled with reddish, sawdust-like frass (excrement), and trunks may be girdled. As with many woodboring pests, damage may not be evident for several years and, once detected, it is often too late to control this pest. Symptoms occur gradually and include yellowing of leaves, smaller leaves and berries, reduced shoot growth, vine dieback, and reduced yield. Diagnosing grape root borer is difficult because these symptoms are also related to attack from pathogens and environmental disorders. Complete diagnosis includes digging up symptomatic vines and inspecting the roots and/or monitoring for the presence of pupal skins around the base of the vine. 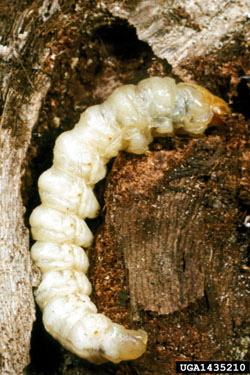 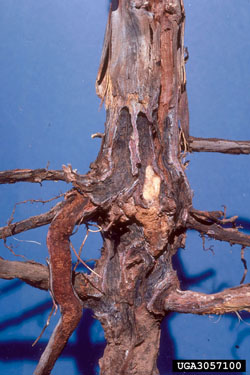 Flights of this species generally begin in earnest sometime in the middle of July. Female borers lay 300 to 400 eggs on foliage, stems, or the ground. These eggs hatch in about two weeks, with the larvae subsequently tunneling into the soil to feed on the roots for the next 1 1/2 years. Larvae work their way through the root toward the crown. Larvae mature in the early summer of the second year and pupate near the soil surface. Adults emerge 30-45 days later, leaving behind their pupal skins which stick out above ground. Females emit a sex pheromone to attract males, mate, and lay eggs. Adults live only for about 7 days.

The presence of pupal skins above the soil line allows for scouting and control without the use of chemicals. If you find any pupal skins on the soil around the base of the vines, cover the pupae with 6 inches of soil, which effectively aborts emergence. When using pheromone traps to monitor adults, be certain to change the pheromone source once per month. Apply chemical controls two weeks after first moth capture.

The Grape Root Borer in Tennessee, University of Tennessee