The adult is a small moth with a wingspread of about 3/8 inch. The front wings are brown with a slight purplish sheen. The head is brown, and the center portion of the forewings may appear to have a dark saddle-like band running across them. Young larvae can be either yellowish green or dull white with a black head capsule. Mature larvae range from olive green to brown in color and are about 3/8 inch long. 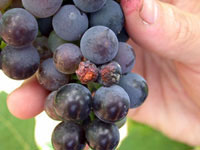 Damage is caused by the larvae feeding in flowers and fruit. Small fruit, when damaged, turn dark purple in color and drop from the stems. Larger fruits are usually webbed into the cluster and shrivel or rot in place. Webbing is evident during and after bloom.

1. Begin monitoring for grape berry moth activity early in the season (April).
2. Target high-risk areas (vineyards with woodlots around more than 25 percent of the perimeter) first. Use three pheromone traps per site to indicate the arrival of the first moths. Place traps in the adjacent wooded area, particularly where native grapes are present. First generation larvae will create webbing on the fruit in May and June, and 2nd through 4th generation larvae can tunnel in several berries.
3. When one moth is captured in traps, growers can start accumulating degree days (base 50ºF).
4. After 400 degree days, check 100 clusters in the edge row for larval activity. It would be unusual to see GBM larval activity this early in the growing season, but it can occur.
5. By mid-May, move the three traps inside the vineyard on the top wire. If more than one percent of the clusters is infested, spray the perimeter from 400 to 700 degree days.
6. From 1,200 degree days on, check 50 clusters along the edge and 50 clusters about ten rows in from the edge.
7. Apply insecticides to control 2nd and 3rd generation GBM across the entire vineyard at 1,200 to 1,600 degree days and 2,400 to 2,700 degree days, respectively. While much of the degree day information gathered thus far is from states such as Arkansas, the validation of these data for other states is ongoing.

Synthetic insecticides may be used to control GBM; however, safer, biological choices are available that are effective. These include formulations of Bacillus thuringiensis (Bt). In addition to the Bt formulations, insect growth regulators are also available for caterpillar control in grapes.

Mating disruption of GBM using Isomate-GBM pheromone has resulted in successful suppression of this insect for up to 90 days in some warm, southern states. This latter strategy is likely very costly and may not fit in an area that has a relatively new industry and probably limited pressure from this insect pest. 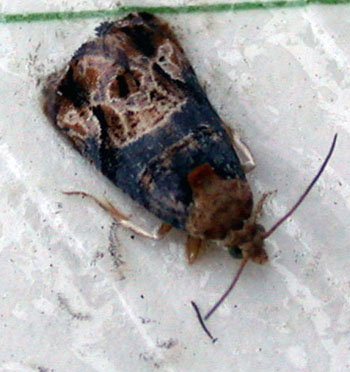 GBM overwinters as pupa in leaf litter. First generation adults emerge before bloom. Eggs are laid onto the cluster. Larvae hatch in three to six days and feed on the cluster. Second generation larvae burrow into formed berries and feed on the expanding berries. Each larva may destroy three or four fruits. Development from deposition of the eggs to emergence of the adults averages about five weeks.