This article answers the following questions: 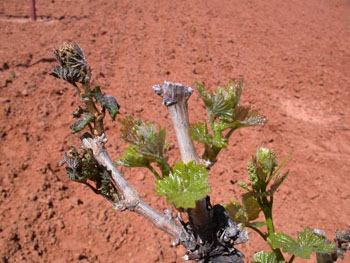 Grapevines are sensitive to freezing temperatures during the growing season; spring frost frequently damages opening buds and young shoots, and in some regions early fall frost can defoliate vines before harvest. There is some variation among cultivars, but the LT50 (lethal temperature of 50% of subjects) of Pinot noir was 26ºF for green swollen buds, 28ºF at bud burst, 29ºF at two-leaf stage, and 30ºF at 4-leaf stage (Sugar et al., 2003). Freeze damage among buds at different stages often varies within a vineyard and even within a single vine. Death of a primary shoot usually results in subsequent development of a shoot from the secondary growing point. Most cultivars do not have good (or any) fruit production from secondary shoots, although some grape cultivars, especially French hybrids, may produce 50% of a normal crop or more from secondary buds and non-count basal buds. Growing conditions during flower cluster initiation in the previous year influences fruitfulness of both primary and secondary shoots.

The most important factor in avoiding frost injury is vineyard site selection. Cold air flows downhill so mid-slope positions are warmer if cold air flow is unobstructed. Grape cultivars vary in date of bud burst by up to 2 weeks, so your selection of cultivars influences frost risk and preferred location within the vineyard. Plant cultivars with early bud burst in locations with the lowest risk of frost. Most French hybrid cultivars, such as Frontenac or Marechal Foch, break bud earlier than Vitis vinifera varieties. Varieties with strong Vitis riparia backgrounds are especially prone to early budbreak. 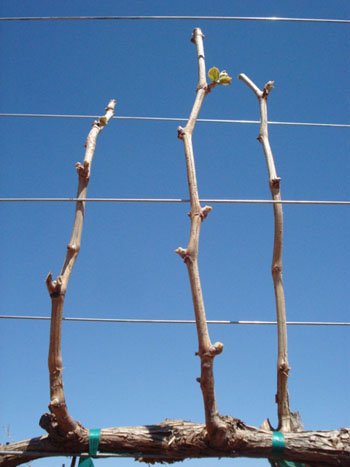 Vineyard management practices also can influence date of bud burst and reduce the risk of frost injury. Pruned vines have earlier bud burst than unpruned vines, so delayed pruning is an effective strategy for delaying bud burst and reducing risk of frost injury. Similarly, double-pruning delays bud burst of basal buds that ultimately produce fruitful shoots. The first step is to prune early to long spurs with 5 to 8 buds. Apical buds burst earlier and suppress growth of basal buds. After frost risk has passed, or once basal buds begin to break, do a final pruning to cut back to two-bud spurs.

Frost protection methods are active efforts to increase temperatures above injury levels and include heaters, wind machines, and overhead sprinklers. What you choose to use depends on the type and frequency of frost and freeze events.

Heaters are generally considered to be too expensive due to high fuel costs. There also is a danger of environmental contamination through the spillage of fuel and air pollution. See the Recommended Links for more detailed information on these active protection methods.

Wind machines are a valuable tool for frost protection in areas where atmospheric temperature inversions occur during radiation freeze events. The warmer air inversion layer typically occurs at about 40-50 ft, and wind machines 30 ft tall with 18-foot blades mix the warmer air from the inversion with cooler air around the vines. One wind machine typically can provide 1-3ºF of warming for about 10-12 acres.

Overhead sprinklers work on the basis of the heat of fusion; water changing from the liquid phase to solid (ice) phase releases a small amount of heat. Rapidly rotating sprinklers provide a constant supply of liquid water coating grapevine buds and shoots. The continuously freezing water releases heat and raises the temperature of grapevine tissues. Although the method seems straightforward, a thorough understanding of the influence of dew point and wind speed on temperatures is necessary for effective use of this method. Improperly operated sprinklers can cause more damage than no treatment when evaporative cooling effects exceed the heat of fusion. Large volumes of water are required for this method.

Spring Frost Damage: What Are the Options, Michigan State University