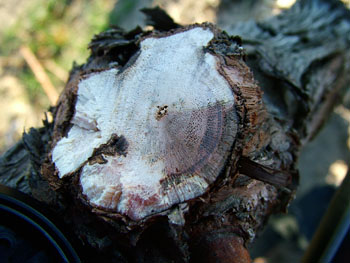 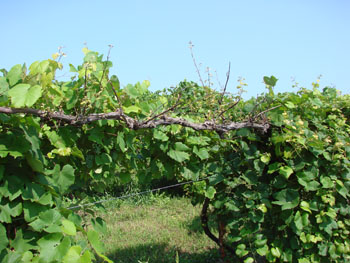 The most recognizable symptom is abnormal, reduced, and deformed shoot growth and is best seen in spring, when shoots are 10 to 15 inches long. Leaves on shoots may be malformed, cupped and yellow (chlorotic). Affected shoots may shed blossom clusters or have non-uniform berry sizes. Sunken areas (cankers) typically form on cordons or trunks near affected shoots, and are most often associated with large pruning wounds. Cankers expand lengthwise in both directions from the wound and girdle and kill arms or trunks of infected vines in 5 to 10 years. Later in the season, affected shoots will be stunted, and leaves become tattered and scorched. Clusters on infected shoots are poorly developed and often wither and drop. Infected vine foliage may be covered and masked by the foliage of healthy grapevines. It is also common to find one side of a vine dead or with disease symptoms and the other side apparently healthy. A cross section of the cut canker will show a wedge-shaped, dead, discolored portion of the wood, but the wedge of dead wood alone is not conclusive diagnostic evidence of the disease. Other factors, including freeze injury, can cause identical wedge-shaped regions of dead wood. Symptom development can take a long time to occur after infection (two or more growing seasons), due to the slow growing nature of the fungus.

1. Sanitation is critical. Be sure to remove and destroy all old vine material from the vines.
2. Avoid pruning during and before wet weather. If large cuts during wet weather are unavoidable, leave a stub several inches long to be pruned off later during dry weather. (This is sometimes referred to as double pruning.) Avoid making large cuts on cordons and trunks until as late in the dormant period as possible. This will allow the vine to recover faster from these cuts, as the plants will soon be active and the window of opportunity for infection by the fungus will be greatly reduced.
3. In spring, when symptoms are evident, mark diseased vines for future removal.
4. Remove diseased wood 4 to 6 inches below the canker, and train a new, healthy shoot into position.
5. If the canker is below ground, remove and replace the vine.
6. In areas with high incidence of the disease, multiple trunk training systems and/or periodic (every ten to 15 years) trunk renewal from latent buds has proven beneficial.

Recent research in Texas and California has resulted in the supplemental labeling of Rally 40WSP (myclobutanil; Dow Agrosciences) for control of trunk canker diseases including Eutypa dieback. Spray timing and integration of other disease management practices will be critical in the effectiveness of Rally 40WSP for controlling trunk diseases. Rally 40WSP should be applied preventively immediately after (within 24 hours) FINAL dormant pruning of vines. Some growers may choose to do some “rough pruning” during the winter with a second round of careful pruning before bud-break. If this is the strategy of choice, then no application of Rally 40WSP is needed after the first “rough pruning”.

Thorough coverage of wood and cut surfaces with Rally 40WSP will provide two weeks of protection, according to the label. A second application may be necessary if weather conditions are consistently wet and/or rainy. Be sure to consult carefully, and have in your possession, both the general label and the new supplemental label for Rally 40WSP so you are familiar with the detailed instructions prior to using this product.

In the Pacific Northwest, preliminary investigations with Prev-Am, (sodium tetraborohydrate decahydrate), which is labeled for use on grapes, may provide some benefit when used against this disease. Furthermore, a 2 to 5 percent solution of Serenade MAX (Bacillus subtilis strain QST 713) applied to pruning wounds may also provide protection. Alternatively, topical treatments with any copper-based product registered for use on grapes will also provide localized protection against infection. A formulation of 10 percent copper in white latex (water-based) paint applied to pruning wounds is one of the most effective measures available for preventing fungal infection of open wounds.

Eutypa dieback is caused by the damaging fungal disease Eutypa lata and affects the woody portions of a grapevine. The disease is typically observed on older vines (more than eight years old), where cordons have been heavily pruned, or where retraining or other large pruning cuts have been made on major portions of the trunk. In the spring, fungal fruiting structures (perithecia) give rise to spores (ascospores) that are airborne or splashed via rainfall to freshly made wounds. Typically, these wounds are a result of normal dormant pruning, but pruning wounds become resistant to infection between two weeks and four weeks after pruning. The spores germinate within the vessels of the plant, and the fungal body (mycelium) grows slowly to the functioning elements of the wood. Optimal temperatures for spore germination range from 68ºF to 77ºF. Moderately infected vineyards can lose 19 to 50 percent of yield, severely affected vineyards 62 to 94 percent. Eutypa can also infect cherry trees, apples, pears, and walnuts, which are heavily planted within many of the same areas and can act as a reservoir of inoculum.