Surface runoff and resulting soil erosion are the principal means by which fertilizers, sediment, and pesticide residues reach surface waters. Infiltration of ‘ponded’ runoff through permeable soils can move nitrogen and pesticide residues into ground water. Controlling water flow through and out of your vineyard will greatly reduce transport of contaminants off site, and will preserve your vineyard’s productivity. Three proven methods of reducing runoff and erosion are to

Soil erosion involves movement of soil particles from one area to another. In arid areas, disturbed soil is often moved by wind. In areas with more rainfall, however, water movement is the prime force behind soil erosion. Soil engineers recognize two types of soil erosion:

Runoff and soil erosion impact surface water quality directly through deposition of sediments in waterways, streams, lakes and estuaries. It is also the principal means by which fertilizers and pesticides (particularly herbicides) applied to a vineyard move offsite, as they are often attached to soil particles. Soil erosion also limits the productivity of vineyards. For example, in almost any older vineyard in New York, one can find eroded knolls where subsoil layers are exposed, and swales or depressions with deep deposits of sediment. Much of this erosion can be traced to clean tillage and frequent disking practiced from the mid-1800s through the early 1980s. This soil movement complicates vineyard management and leads to more variability in vine size and performance. In flatter areas with permeable soils, runoff accumulates in low areas of vineyards, where it can slowly infiltrate into groundwater. For these reasons, soil conservation practices that control water movement both into and out of vineyards, and limit the force of rainfall hitting the soil, are the best means for maintaining sustainable production and avoiding off-site movement of pesticides and fertilizers.

Soil conservation professionals use RUSLE as a planning tool to determine how different management practices or structures would affect the annual soil loss. For example, installing diversions or terraces would reduce erosion by reducing the effective slope length. The general goal is to reduce the annual estimated soil erosion (A) to less than the annual replacement or soil formation rate, generally between 3 and 5 tons per acre per year. If that sounds like a lot, consider that an acre-foot of soil weighs about 2 million pounds, and that 5 T/acre/year would amount to a layer about 0.03 inches thick.

Soil conservation practices prevent erosion and maintain clean water in three ways. First, diversion of water around vineyards keeps water clean, because it doesn’t wash over disturbed soil in the first place. Filtering of water through soil (drainage systems) and ground covers removes soil particles and other material suspended in water that passes through vineyards. Finally, ground covers provide a protective barrier that breaks the force of raindrops that could otherwise dislodge soil particles. Key soil conservation practices used in vineyards are: 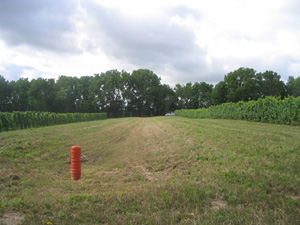 Diversion Ditches. Diversion ditches are soil structures constructed at intervals across the slope. They collect water from slopes and divert it into natural drainage ways. They are seeded and gently graded, and slow the water down to reduce its erosive force. They can reduce the amount of water running through a vineyard by as much as 80%.

Water and Sediment Control Basins. Raising a berm across a gully with a subsurface outlet pipe that discharges at the base of the slope will collect runoff, and this will stop erosion by slowing down water and collecting the sediment.

Buffer Strips. All vineyards require headlands and grassed areas around their perimeters to allow machinery to turn around. These grassed areas also protect natural drainageways by filtering surface water that leaves vineyards before it gets to streams, drainageways and depressions. Generally, about 40 feet of headland around vineyards is adequate for a buffer strip.

Drainage Tile. Subsurface drainage tile, commonly used in  vineyards with moderate to heavy-textured soils, also helps protect water quality in two ways. Drainage tile reduces surface runoff that would otherwise occur when soils become saturated with water. It also allows water to be filtered through the soil, which removes many contaminants that would be present in surface runoff.

Vineyard Layout. Planting vineyards so that the rows run across the slope rather than up and down the slope can reduce erosion by up to 50 per cent. In New York’s Finger Lakes Region, east and west-facing slopes predominate, so planting across the slope allows vineyard rows to be oriented north and south, which allows for maximum sunlight interception as well as soil conservation.  In other areas, slope direction varies, and all other things being equal, vineyards should be planted across slopes (even if doing so results in east-west rows rather than north-south row orientation) to control erosion.  Steep slopes (>15 to 20% slope) may need to be planted up and down hills to allow safe use of machinery, but such sites will be prone to more erosion as well.

Changes in vineyard floor management practices have undoubtedly had the greatest positive effect on reducing soil erosion and improving water quality in New York vineyards. From the 1940s to the early 1980s, most growers practiced clean tillage between vineyard rows. This method of weed control, which involved up to four or five passes through a vineyard annually, left vineyards vulnerable to soil erosion during much of the growing season. Its use has left a lasting legacy of highly eroded land, some of which no longer supports profitable grape production. 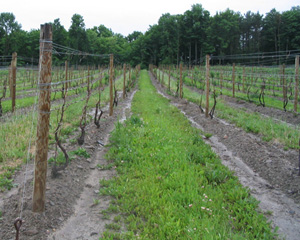 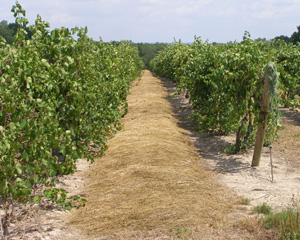 Mulch. Straw mulch is commonly applied in row middles, especially in eroded sites with less vigorous vines. Although expensive to apply, it has many beneficial effects — it conserves soil moisture, increases availability of soil nutrients, provides a barrier to reduce the force of rain drops, and can directly increase yield by up to 20 per cent on some sites. 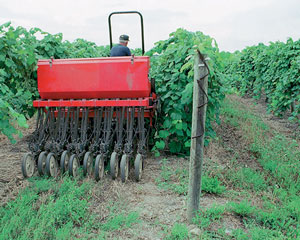 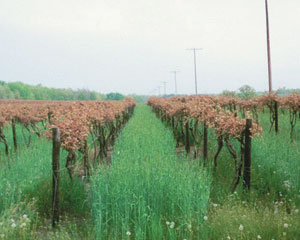 Seeded cover crops. No-till seeding of row middles is another practice used by some growers. Typically growers seed cereal rye in the fall, which germinates before winter. It then resumes growth in early spring, and is later mowed or killed with a contact herbicide. The decomposing straw left behind also has chemical substances that prevent new weeds from germinating and extends the ‘weed-free’ time. Reduction of tillage, while reducing soil erosion, also has the added benefit of allowing more timely operation of equipment after rainfall and reducing soil compaction from machinery. 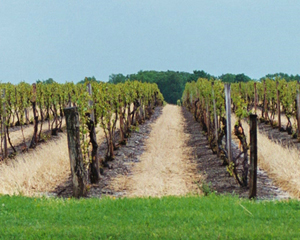 Using cover crops and mulches to protect the soil surface has an enormous effect on annual rates of erosion. Mulches reduce the force of rainfall hitting the soil by 98 per cent, according to Jim Balyczek, Soil Conservation District Manager, Yates County, New York. Use of permanent cover crops in row middles on a 10 per cent slope with a 200 feet slope length reduced potential annual erosion from 5.1 T/acre under ‘clean tillage’ to 0.39 T/acre, in an example provided by Tibor Horvath, NYS Conservation Agronomist, USDA Natural Resources Conservation Service, New York.

Vineyards may be especially vulnerable to soil erosion during establishment. Many non-bearing vineyards are maintained with clean tillage to help vines get off to a strong start without undue competition from weeds. Small vines don’t develop much of a canopy to intercept rainfall before it reaches bare soils. The best time to consider and install soil conservation structures is while you are planning and designing layout of the vineyard. So consider these steps when establishing a vineyard: 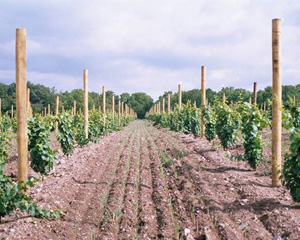 Seeding a cover crop in late summer will protect the soil through the fall and winter months. Photo by Tim Martinson, Cornell University.