Vineyard floor management in arid climates often needs to address the entire ecosystem of the vineyard and overall production goals, just as in vineyards located in other regions. However, arid climates present unique challenges when considering cover crop choices and vineyard floor management systems. Grape production in arid climates is often characterized by low annual precipitation, warm days and cool nights, and soils that are light in texture and low in organic matter.

Wind and water erosion can strip up to 2.5” (6.3 cm) of the topsoil in a growing season (Figure 1), reducing soil fertility and organic matter. Cover crops can help to maintain erosion-prone topsoil as soil accumulates in areas where cover crops are present. The soil structure in arid climates often contains highly mobile sand or loam particles, contributing to wind and water erosion and damage to vines from “sandblasting” effects. Certain cover crop species are more effective at holding the topsoil in place than others (i.e., grasses vs. broadleaf species). In addition, vegetative cover reduces the impact of rainfall on soil types prone to water and wind erosion. 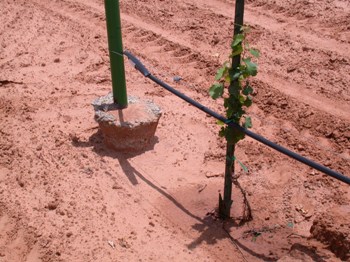 Irrigation of a cover crop in an arid environment is not often a priority in an overall vineyard management plan. Drip irrigation of grapevines within the row does not often spread beyond 15 inches (40 cm), thus very little water reaches between vineyard rows for cover crops to establish. A dual–irrigation system is an option to establish a cover crop between the rows with microsprinklers, while the grapevines are irrigated with drip emitters. Use of drought-tolerant cover crop species will minimize further use of a dual-irrigation system beyond the establishment phase.

It is important to get a good cover crop stand established to take advantage of the many benefits of using cover crops. Poor establishment due to lack of irrigation, poor nutritional content of the soils, or cold damage of seed in fall-planted systems will severely reduce the effectiveness of the cover crop to decrease soil erosion, weed suppression, or attract beneficial insects. 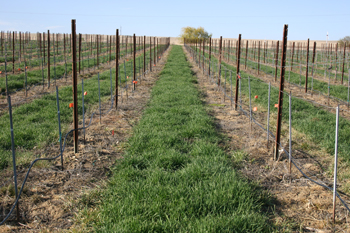 Grasses. Grasses form fibrous root systems, holding soil particles in place in areas prone to wind and water erosion. Grasses also have additional benefits in managing soil nitrogen, a benefit in high fertility soils and highly vigorous vineyards. Both annual and perennial grasses may be used. Several annual grasses (or cereal grains) such as cereal rye, oats, barley, and triticale are utilized as winter annual covers or grown in the early part of the growing season to control winter and spring erosion. Perennial grasses are often used in vineyards whether in dry or humid regions; however, those that are drought-tolerant will provide year-long cover over multiple seasons in arid climates (Figure 2).

Legumes. Legumes are known for their ability to fix nitrogen and release it as roots or the plant itself decomposes. Nodules on the roots house the “factories” that contain nitrogen-fixing bacteria and form a symbiotic relationship with the legume. There are several drought-tolerant species of legumes such as medics (Medicago spp.) and subterranean clover (Trifolium subterraneum) that will survive both arid climates and cool winters, provided they have good establishment. 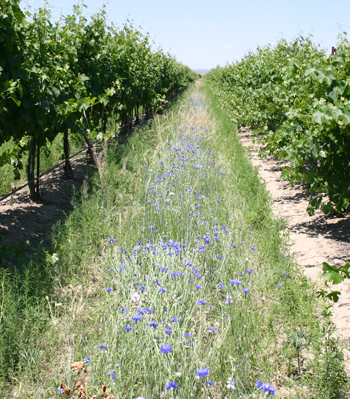 Insectary Mixes. These are a mix of plant species that may contain forbs, legumes, and/or grasses which may be annual or perennial in nature. Blended mixes are made of various species of wildflowers and grasses and can be helpful in managing habitat and conservation biological control. It can be difficult to establish these insectary mixes, and they may need supplemental irrigation to form a good stand of plants to attract beneficial insects throughout the growing season. Although they have the potential to promote diversity in plant species in the vineyard, it is uncertain what level of biological control can be practically managed.

Recommended seeding rates are available for both annual and perennial cover crop species.

Many annual cover crops are planted in the fall to take advantage of winter precipitation for germination and establishment, and they are tilled under during spring. Grasses serve to provide traction for equipment and reduce excess nitrogen in the vineyard. Legumes are often tilled into the soil to provide nitrogen and organic matter. Mustard crops may be used pre-plant to reduce nematode populations, through the production of certain chemicals upon decomposition that are similar to soil fumigants.

Some common annual cover crops are:

Perennial cover crops offer the benefit of providing soil cover for multiple seasons without replanting. Many drought-tolerant grasses are dormant during the summer months, when irrigation is limiting, and regrow when precipitation increases soil available water. Native mixes of grasses and wildflowers will perform best for a given vineyard location, as germination and establishment are optimized for that particular location.

Some examples of perennial cover crops are:

Cover Crop Selection and Management in Orchards and Vineyards, University of California Davis