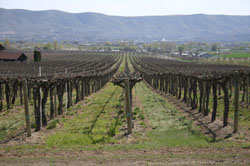 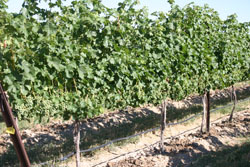 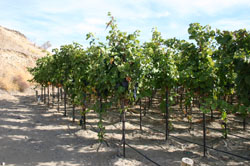 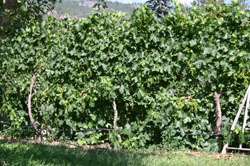 Shoot positioning is an important element of canopy management in the vineyard. Proper shoot positioning results in orienting shoots to create a uniform distribution of foliage that minimizes shading of fruit. An open canopy is essential to the productivity of the vine as well as fruit quality. Not only is shoot positioning important for the current growing season, it also has an impact on productivity in the following year. Sunlight encourages the development of more fruitful buds for next year’s crop.

Shoot positioning also has a positive impact on disease incidence and severity. Disease pressure is lessened due to increased air flow and sunlight penetration.

The manner in which shoot positioning is approached will depend on the trellis and training system in place. In a low cordon trellis system, such as Vertical Shoot Positioning or VSP, the process is sometimes referred to as “tucking,” since canes are tucked upward between a set of catch wires as they develop. Tucking of shoots will need to be done several times during the growing season. On high cordon systems such as Geneva Double Curtain or GDC, and bi-lateral cordon, shoots are positioned so they grow downward and out from the cordon. This process is sometimes referred to as “combing.” Downward positioning will reduce the vigor of shoots and will assist in attaining optimal canopy density. Shoot positioning is performed on the interior of the GDC trellis to maintain two, distinct canopies — often referred to as “center breaking.” This task must be done at every shoot positioning pass.

In most training systems, shoots can be positioned manually or mechanically with specialized equipment. It is usually done one to two weeks after bloom, before tendrils have become firmly attached. Two or three shoot positioning passes will be needed for best results.

Trellis Systems for Your Vineyard, University of Nebraska