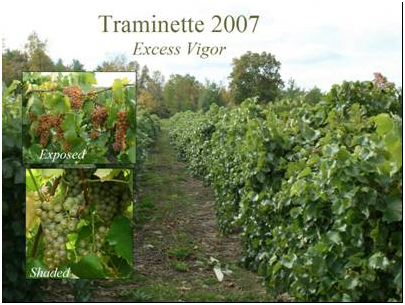 One of the basic principles of viticulture is that vines function best and deliver optimal fruit quality — and quantity — when the grapevine canopy is in balance with the amount of fruit the vine is carrying. This applies whether or not the crop is Concord juice grapes or high-end Cabernet franc. A grower managing a vineyard wants to have the proper ratio of leaf area to fruit to be able to support a reasonable (or large) crop and be able to ripen it.

Too much vegetative growth (under cropping) leads to shoot crowding, excessive shading, numerous leaf layers, and fewer fruitful buds the following year. Too little leaf area for the amount of fruit present and the fruit won’t ripen (overcropping).

Highly vigorous vines with dense canopies can get caught in a vicious vegetative cycle — where excessive growth leads to less fruitful buds, which leads to more growth and even lower bud fruitfulness. Moreover, in dense canopies, quality of existing fruit is compromised.

For example, the Traminette vines in Figure 1 received excessive nitrogen, and produced an extremely dense canopy. The grower found his fruit delayed in ripening, despite a moderate crop, and fruit maturity varied from overripe (exposed clusters) to under-ripe (shaded clusters). Harvest was delayed by two weeks compared to other Traminette vineyards in the area.

More importantly, many of the compounds that impart Traminette’s unique flavors are directly influenced by exposure to sunlight. Wines produced from this particular vineyard undoubtedly had less of the ‘Gewurztraminer-like’ flavors than other blocks with more balanced canopies.

The importance of open canopies

So how do you get there?

If you are lucky, and have a moderate vigor site, dormant pruning alone will result in moderate growth conducive to optimal crop levels and an open canopy. Leave the right number of buds and the rest will follow. More often, you may need to use additional canopy management techniques to improve light interception and produce a quality crop.

Ranges of optimal shoot density, shoot length, and crop level to leaf area ratios have been defined for vinifera by previous research. They indicate how close the vine is to having a balance of vegetative growth and fruit. Appropriate values for hybrid canopies may be higher.

From a grower standpoint, the most practical measurements to judge vine balance are yield (lb/vine) and pruning weight (lb/vine). While it’s impractical to routinely collect and weigh prunings from every vine, it is important to do so on a few vines each acre to get a benchmark average pruning weight. It also helps to get a feel for how a ‘1 lb vine’ or a ‘2 lb vine’ looks. Yield per vine (T per acre x 2000 lb/ton /vine count = lb/vine) can then be divided by average pruning weight to determine ‘crop load’ ratios. As the table above indicates, a range of 5 to 12 for this ratio is the ballpark you want to be in for vinifera grapes, although, again, crop loads for hybrids may be higher.

Appropriate pruning weights vary, but the target for a vine with 6 ft in-row spacing trained to a single canopy would be 0.3 lb/foot of row x 6 ft = 1.8 lb pruning weight.

Most growers are familiar with the basics of vertical shoot positioning (VSP) as a training and canopy management system for high-end vinifera grapes. Canes or cordons are tied to a low fruiting wire, and moveable catch wires are used to force shoots to grow upright. Shoots may be thinned early in the season and clusters removed. When shoot growth extends beyond the top of the trellis, shoot tips are removed in one or more passes to prevent shoots from shading the lower canopy, and basal leaves in the fruiting zone are stripped mechanically or by hand to expose the clusters. Green harvest at veraison of lagging fruit clusters can improve overall uniformity of ripening (Figure 2).

Each of these practices involves an additional pass through the vineyard, and a substantial amount of labor. High-value vinifera grapes — at $1500 to $2500 a ton — may support this intense labor input. But what about lower-value, more disease-resistant hybrids? What canopy management practices will ‘pay off’ for hybrid grape producers?

Many hybrids are ill-suited for low training and VSP unless the cultivar is extremely low in vigor. Since most hybrids have downward growth habits they are better suited for high training systems, such as the Hudson River Umbrella or ‘high cordon’ system (Figure 3), or Umbrella kniffen. Grown on VSP, shoots are hard to train upward because they want to grow downward. When vigorous hybrids are trained to VSP, shoots can grow over the top of the catch wires, sprawl downwards and shade the fruiting zone (Figure 4). Moreover, many tend to be highly vigorous when growing ‘up’, and are devigorated (growth slows) when they grow down.

So what practices are suited for vines trained high?

Some hybrids (e.g., Seyval blanc and Dechaunac) have fruitful basal or non-count buds, so it is difficult to control their crop through pruning alone. The main opportunities for modifying canopy density and shading in hybrids are shoot thinning and basal leaf removal, supplemented by early fruit thinning in large-clustered varieties such as Seyval blanc and Chambourcin. Shoot tipping (hedging), while possible, is much harder to do on varieties trained high.

Catch wires are not used, unless the cultivar is extremely low in vigor. When vigorous hybrids are trained to VSP, shoots can grow downwards over the top of the catch wires and shade the fruiting zone (Figure 4).

Figure 4. Vigorous Noiret trained to VSP. Note that shoots have grown over the catch wires and back down towards the ground, shading the fruiting zone. Photo by Tim Martinson, Cornell University.

Shoot thinning accomplishes two things: it reduces canopy density and at the same time reduces the number of clusters per vine. Since it is done early, clusters may compensate by increasing fruit set or berry size – although this does not eliminate the difference in crop weight.

Cost and Timing of Shoot thinning. Shoot thinning is best done early in the season, at around 5 to 10 inch shoot growth. At that time, it is easy to remove shoots rapidly by hand. The more this is delayed, the more shoots will be lignified and hard to remove without pruning shears. Aim for 4 to 6 shoots per foot of canopy, and concentrate on removing any secondaries (double shoots) when possible.

Figure 5 illustrates an Umbrella Kniffen-trained block of Marechal Foch. Note that with overlapping canes, what counts is to have the appropriate number of shoots (possibly on several canes) in each foot of row.

In a Cabernet Franc vineyard in the Finger Lakes (Figure 6), we thinned several 60-vine rows and timed how long it took to do so. By maintaining a slow walking speed and focusing on picking off shoots in the densest parts of the vines, we averaged between 7 and 9 seconds per vine to complete this task. On a per-acre basis (807 vines per acre) that works out to about 1.6 hours per acre. This is a very small amount of time compared to other hand-labor tasks such as pruning, cluster thinning, and suckering vines.

Figure 6. Shoot thinning in a Cabernet Franc vineyard in the Finger Lakes region of NY (left). Shoot density of 5 shoots per foot of canopy after thinning (right). Photos by Tim Martinson, Cornell University.

Removing leaves around the cluster zone is a common method to increase fruit exposure. The difference between high-trained hybrids vs. VSP-trained vinifera is that the leaf removal is done at the top, and shoot positioning is not as precise. This may rule out mechanical leaf removal, as one will inevitably cut off horizontally-oriented shoots along with basal leaves, leaving more or less short shoots. Later timing of leaf removal (so that developing clusters weigh down shoots and they don’t ‘sprawl’ out to the side) may reduce this problem.

At any rate, extreme leaf removal in the cluster zone should be avoided. Removing too many leaves will reduce photosynthetic capacity too much. Aim for about 50% cluster exposure.

Shoots can be manually positioned downwards – basically by manually ‘combing’ the ones that are growing laterally to a downward position. This may devigorate fast-growing shoots, and provide more light in the renewal zone.

If vines are not on VSP, then the canopy can be mechanically hedged along the sides to control vine size and provide more light exposure, although studies have demonstrated mixed results with this technique —likely due to the variable shoot length that results. This may be a useful tool if vines are so vigorous that shoots grow too far into the row middles to allow the tractor to pass, but it may not improve fruit and wine quality.

Some hybrids will benefit from cluster thinning. One thinks of varieties with large clusters and fruitful buds, like Seyval blanc and Chambourcin. Cluster thinning, in general, takes more time than shoot thinning. Timing can be an issue. The earlier you begin (for example at fruit set rather than veraison), the faster you can accomplish this task. Early cluster thinning will likely result in some compensation (larger berries, redirection of photosynthate to remaining clusters). Post-veraison cluster thinning (also known as ‘green harvest’) will not change fruit chemistry much, but will improve the consistency of fruit maturity at harvest. Essentially, after veraison, one removes clusters that lag behind in development, so that they don’t impart unripe flavors to the wine.

Hybrids often have different growth habits than V. vinifera and may not be suited to vertical shoot positioning (VSP) – and the canopy management manipulations that are possible with it. Canopies of vines trained to high-cordon or umbrella kniffen, however, can be modified – with improved fruit and wine quality being the payoff.

The most cost-effective way to do this may be shoot thinning. If done at the appropriate time (5 to 10 inch shoot growth) it can be done rapidly. Aim for 4 to 7 shoots per linear foot of canopy (if canopy is vertically or horizontally divided, that is 4 to 7 shoots for each portion of a divided canopy), and remove secondary buds where both primaries and secondaries have pushed. The result will be a more open canopy, fewer leaf layers, better fruit exposure – and hopefully more intense flavors and fewer ‘unripe’ flavors in your wines. Try it out in a portion of your vineyard, vinify it separately, and taste the results.