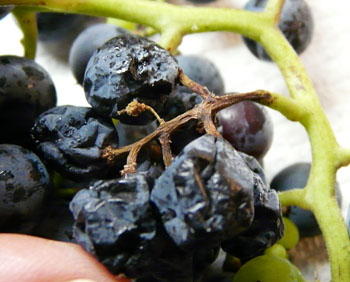 Bunch stem necrosis (BSN), also known as “waterberry,” can occur around bloom (when it is called early bunch stem necrosis), at veraison, or later. At bloom, symptoms of BSN begin as the pedicel elongates. The pedicel can become necrotic, often resulting in the dropping of the flower buds. Later, entire sections of the inflorescence can shrivel and die, and may or may not drop off. Starting at veraison, BSN symptoms appear as necrotic patches on the rachis or peduncle. This limits the supply of water and nutrients to the berries, resulting in berries that have less sugar, remain sour, and eventually shrivel. This can happen any time after veraison and usually affects the tip or a shoulder of a cluster (in severe cases entire clusters).

No pathogens are believed to cause this condition. Instead, certain weather conditions and vine nutrition seem to be associated with its occurrence. Low temperatures and high humidity around bloom or excessive rainfall after veraison may be related to its development. Imbalances between calcium and potassium as well as low levels of nitrogen in vines are other possible causes. Unaffected portions of clusters develop normal fruit quality.