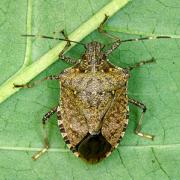 Brown Marmorated Stink Bugs (BMSB) are native to China, Japan, and surrounding countries. The BMSB has caused economic damage for small fruits, including grapes, in the mid-Atlantic states. The bugs cause direct damage to the berry by feeding with their piercing-sucking mouthparts, which also increases the chance for disease infection. In harvested wine grapes, 5 to 10 bugs per lug can lead to foul aromas that may reduce varietal character. Aromas associated with BMSB include “crushed cilantro”, “skunky”, “citrusy”, and “piney”.  Like other invasive exotic insect pests, BMSB arrived in North America without its native natural enemies to keep populations in check, resulting in massive numbers. In addition, the pest likes to overwinter in homes in large numbers and can be a nuisance. It appears that many mid-southern states have reported the pest, but have yet to report any damage. Heavy damage to various crops has so far been confined to the mid-Atlantic states (eastern PA, NJ, VA, MD, NC).

The BMSB mates continually throughout the growing season, with 1 to 5 generations produced per year depending on temperature and geographic location.  Each female may lay up to 400 eggs in her lifetime.  Eggs hatch in 4 to 5 days and nymphs (immature wingless forms) feed constantly.  Like the vast majority of stink bugs, this pest targets seeds, so fruit in mid-to-late development appears to be the most vulnerable. This stink bug looks similar to other native brown stink bugs that may be commonly observed damaging small fruits and vegetables. However, BMSB is often observed in very high numbers and can be distinguished from other species by the presence of lighter bands on the antennae and darker bands on the membranous, overlapping portion of the front pair of wings when at rest.  Nymphs are more difficult to identify from other common brown stink bugs, but very small nymphs will have deep red eyes and a yellowish-red abdomen. As nymphs grow, the undeveloped wings begin to expand and the abdomen becomes off-white with red spots.

Control of BMSB can be difficult, but the best options are early detection via trapping and scouting and proper timing of insecticides. The BMSB is a serious pest because it feeds on hundreds of hosts, is difficult to control with common synthetic insecticides, and populations can be incredibly high at times. Contact insecticides kill effectively, but migrating populations of BMSB can quickly re-infest the crop.

NJAES. 2013. How to Identify the Brown Marmorated Stink Bug.