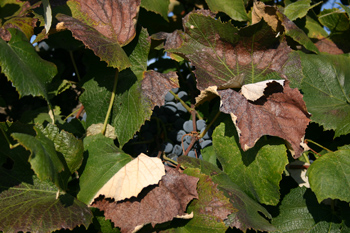 Once thought to be due to potassium deficiency, “blackleaf” in grapevines is a physiological disorder that can cause yield reductions in grapes, primarily juice grapes such as ‘Concord’. This disorder differs from potassium deficiency in that potassium deficiency is characterized by discoloration in the leaf margins, while blackleaf is observed as an overall dark discoloration of the leaf (Figure 1). Research conducted at Washington State University determined that leaf discoloration associated with this disorder is due to water stress and excessive UV-B radiation often observed in high desert climates. However, this disorder has been observed in other areas of the United States when water stress and high sunlight conditions exist for an extended period of time. When exterior leaves are lifted, interior leaves do not show discoloration, indicating that leaf damage is restricted to the outer layer of the canopy (Figure 2). 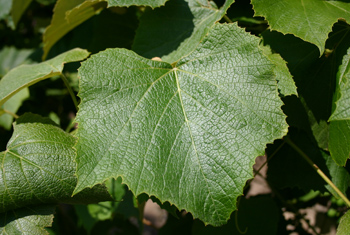 The symptoms of blackleaf range from mild to severe (Figures 3-5), and can cause vine defoliation in severe cases (Figure 6). The color can be brown, purple, or black, leading to an overall ‘darkening’ of the canopy. Blackleaf can vary in location throughout the vineyard, and throughout the season. Once symptoms are observed, damage has occurred earlier in the season. Thus, it is important to maintain the health of the remainder of the canopy to achieve optimum fruit quality. 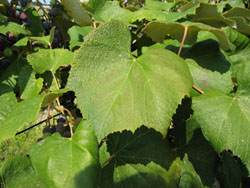 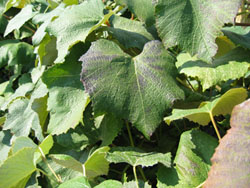 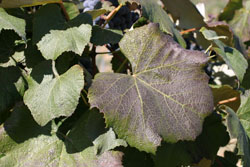 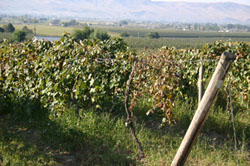 Symptoms can be classified into several categories to track progression of the disorder throughout the season, and from year to year (Table 1). 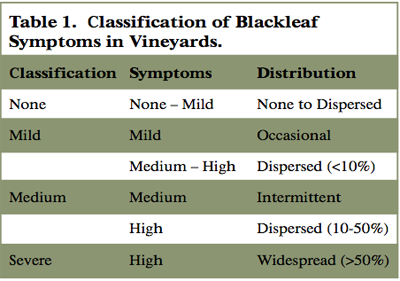 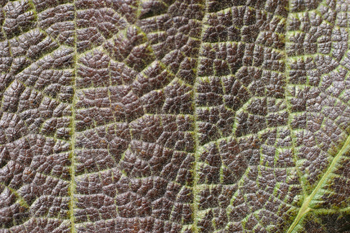 This disorder is most often observed in grapevines that develop large canopies, like juice grape varieties. Vineyards that practice regulated deficit irrigation (RDI) can exacerbate the incidence of blackleaf, in combination with high solar radiation. The combined water and light stress have been linked to chlorophyll damage and development of necrotic areas in the leaf. Reduced chlorophyll levels have been found in leaves expressing moderate (Figure 4) and severe (Figure 5) symptoms. 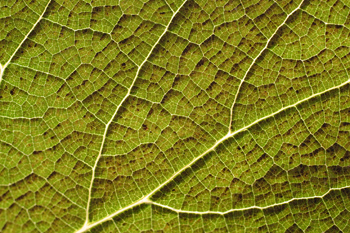 Figure 8. Necrotic areas also can be observed on the underside of affected leaves. Photo by Lynn Mills, Washington State University.

This disorder targets the outer layer of the canopy, specifically the epidermis of the leaf (Figure 7, 8). In vines affected with blackleaf, chlorophyll is degraded, necrotic areas form, and subsequently, photosynthesis rates are reduced. Severely necrotic leaves often abscise from the grapevine, and may occur during key periods of fruit development and ripening. Fruit left on defoliated vines often have poor sugar accumulation and subsequent fruit quality. Over time, vine decline can occur and may cause vine death.

Blackleaf in juice and wine grape varieties can be prevented by making adjustments in vineyard management (Table 2). Although plant nutrition had previously been implicated in this physiological disorder, be sure to conduct the proper tests to determine if plant nutrition has a role in symptoms being observed in the vineyard. As indicated in Table 2, adjustments in canopy or irrigation management can also aid in alleviation of blackleaf symptoms. Often, a combination of factors may lead to blackleaf symptoms, requiring a multi-faceted approach to adjustments in vineyard management.

Grapevine Problems: Leaf Spots Not Caused by Insects or Disease