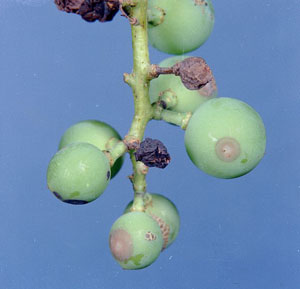 All new growth is susceptible to black rot. Leaves, shoots, petioles, etc. can be infected. Spots on leaves will appear as small, tan to reddish-brown circular lesions. As the lesions mature, small black fungal reproductive structures (pycnidia) will form within the lesion and appear as black pimples. Lesions on shoots will be elongated, tan in color and have pycnidia that form at maturity. Infections on berries will appear as small white spots that will shortly manifest into reddish-brown rings. In a period of a few days the berries will dry and shrivel into a hardened, black mummy.

Genetic resistance is the easiest and most economical way to manage this disease. Most Vitis vinifera grapes are highly susceptible to black rot, while many French-American hybrids and American grapes have improved resistance to the fungus that causes black rot. However, in many regions, black rot is the major disease threat on all commercial grape cultivars.

Because the primary source of spores for new infections results from structures formed in old plant tissue, sanitation is extremely important. Proper dormant pruning and destruction of old canes, clusters, and other plant parts can significantly reduce the amount of primary inoculum (spores). Removal of mummies from the canopy and cultivation or burial of debris can help limit damage caused by the black rot fungus. Also, canopy management during the season can help to increase airflow, which reduces leaf wetness duration (primary component for infection). Practices such as shoot positioning and strategic leaf pruning can reduce drying time.

Fungicides are available for managing black rot and should be used preventatively when weather is predicted to be favorable for infection and disease development. The most critical time for application of fungicides is just before bloom until at least four to six weeks post-bloom. Once veraison is initiated, natural resistance in the fruit exists and fungicides to control black rot specifically are not required; however, growers should not forget about the presence of other pathogens in their vineyard. Chemical management of powdery and downy mildew must continue until harvest and may even require an application of fungicide post-harvest. Spray intervals should also be shortened if extended periods of wet weather are forecast. Fungal resistance to fungicides should also be considered. Although there are no known cases of fungicide resistance developing in the black rot fungus, growers should rotate fungicides frequently to minimize the risk of fungicide-resistant populations in the vineyard.

Black rot, caused by the fungus Guignardia bidwellii, is indigenous to North America. European grape cultivars (Vitis vinifera), which have no innate resistance to the disease, are highly susceptible. Crop loss in susceptible cultivars due to black rot can be significant (50 to 100 percent) if the disease is left unchecked or not properly managed.

The fungus overwinters on shriveled, mummified berries that remain in the canopy or fall to the soil. In spring after budbreak, spores (ascospores) are ejected after a rain event. Rain events will continue to trigger spore dispersal up until mid-July. Ascospores infect leaves, flowers, and young fruit. Therefore, black rot will initially manifest on leaves, petioles, canes and young fruit. Secondary infections follow and result in increased damage to leaves and fruit. Hence, the disease is considered polycyclic (having more than one cycle) because several generations of infective spores can be generated in a single year. Most loss is a result of direct destruction of the fruit by the fungus. As the fruit mature and enter veraison, they become resistant to infection.