The structure of the grape berry may be roughly divided into three tissue types: skin, flesh, and seed (Figure 1). The chemical composition of each of these tissues types differs, which strongly influences final grape and grape product quality. 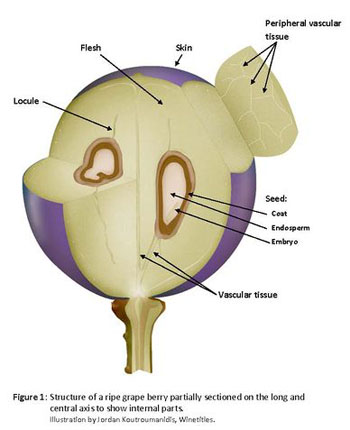 The skin of the grape berry is also known as the exocarp. It is covered by a waxy layer called the cuticle. Unlike some other plant surfaces, the skin of a grape berry does not contain a significant number of functional stomata. Therefore water loss occurs mostly through the waxy cuticle, a relatively slow process. One consequence of this physiology is that grape berries do not dissipate heat well via water evaporation. Another consequence is that grape berries are not well able to shed excess water quickly. Hence they are more susceptible to splitting compared to some other fruits.

Just under the outer layer of skin cells lies a tightly-packed layer of flattened cells called the hypodermis. These cells tend to accumulate phenolic compounds in relatively high concentrations as the grape berry matures. Among their other effects, these compounds strongly influence aroma, flavor, and color attributes. Therefore, they play a key role in determining final juice and wine quality and sensory characteristics.

The compounds concentrated in these cells include many types of tannins, which strongly influence elements of mouthfeel such as astringency, and flavor such as bitterness, and many specific flavor notes. Most of these compounds are accumulated during early berry development, prior to veraison. The per-berry concentration of tannins does not appear to be much altered in the skin during the later stages of grape berry maturation, but the chemical structure of the tannins is altered. These changes lead to less astringency, less bitterness, and a smoother mouthfeel.

Pigments, mainly anthocyanins in red grapes, accumulate in these cells beginning at veraison. Many aromatic compounds such as the terpenoids, responsible for pleasant, fruity aromas, begin accumulating in these cells during this time as well.

In “slip-skin” varieties of grapes, there is a breakdown during ripening of the pectic materials that serve to bind together plant cell walls of the cells that make up the flesh immediately below the hypodermal layer of the skin. This allows the skin to separate readily from the berry flesh in these varieties.

The cells that make up grape berry flesh are typically larger and rounder than the cells that make up the skin. These cells contain large vacuoles, which are the primary sites for the accumulation of sugars during grape berry ripening. As it enters the berry, sucrose that is transported into the cells from the vine canopy is broken down into glucose and fructose, which are the primary sugars found in mature grape berries.

Acids and phenolic compounds are also concentrated in these vacuoles, with the primary acids being tartaric and malic acid. In contrast with those located in the skin, acids and tannins located in the flesh tend to decline in per-berry concentration during berry maturation. The concentration of malic acid in particular tends to decrease. Tannins and acids present in these cells are considerably diluted by the influx of water that occurs as the grape berry matures.

The grape berry flesh cells divide rapidly until about three weeks after flowering and the rate of division is influenced by environmental factors. After cell division slows and stops, there is a short lag phase when berry size is stagnant. Following lag phase, cell size rapidly expands due to the engustment of water into the berry and its cells. It is in this third phase of berry growth that veraison occurs. Thus, fruit size in grapes is determined by cell number and, predominantly by the enlargement of those cells in the berry flesh that takes place as the grape matures. Vacuoles in these cells expand or contract substantially in response to water uptake or loss, particularly after veraison.

Grape seeds are contained in locules (Figure 1), which are indistinct in mature berries. The seeds are composed of an outer seed coat, the endosperm, and the embryo. As with most seeds, the endosperm comprises the bulk of the grape seed and serves to nourish the embryo during early growth.

As the seeds grow during fruit maturation, they produce growth regulators that strongly influence fruit size. Thus, the size of a particular grape berry is determined in part by the number of fertilized seeds that develop within it.

The seed coat also contains relatively high concentrations of tannins. Similar to the tannins and phenols found in the flesh, these tannins are reduced in concentration on a per-berry basis as the berries mature. In particular, phenols responsible for bitterness are altered or rendered less soluble/extractable.

During its development, the grape berry obtains water and other nutrients through its vascular system (Figure 1). This system consists of central bundles and a peripheral network.

Evidence suggests that xylem vascular tissue is the primary source of grape berry nutrients until veraison, but that ploem vascular tissue becomes the primary source after veraison. Xylem serves to transport nutrients primarily from the roots. These nutrients include minerals, hormones, and other compounds. Phloem serves to transport nutrients primarily from the canopy; these are mainly sugars, mostly sucrose. Thus, the changes in grape berry vascular tissue seen during maturation correspond nicely to the development cycle observed in the grape berry cells: most changes observed in grape berry composition after veraison relate to the accumulation of sugar and the influx of water from the phloem.