“Quality” in winegrapes has historically been loosely defined by berry maturity or “sugar ripeness,” the concentration of soluble solids in the fruit and the sugar:acid balance. These attributes are critical to successful fermentation and a balanced wine. However, with advances in analytical chemistry over the last half century, the number of chemical attributes that we associate with fruit and wine quality has grown. Modern day gas chromatography was developed in the 1950s and is used to analyze volatile compounds, like varietal aromas we associate with Sauvignon blanc wine, for example. High performance liquid chromatography methods were advanced in the 1980s for measuring other fruit quality indicators, such as phenolics. Today, time, effort, and money are devoted to defining, quantifying, and understanding quality in grapes, and the connection between “quality” attributes and the sensory properties of wine. It is important to keep in mind that fermentation biochemically and chemically transforms some of the compounds that we associate with fruit quality. Consequently, our initial fruit chemistry measurements can be disconnected from the consumer’s sensory perception of the wine, thus making decisions in the vineyard and winery important for the end product.

Manipulating grapevines to improve what we define as fruit quality predates much of our knowledge of grape and wine chemistry. Why? For millennia, humans have coaxed and battled the natural growth habit of the grapevine to make the plant agriculturally productive. In their native form, grapevines grow rapidly up tree trunks that provide physical support. The long shoots splay leaves and clusters along the top of the tree canopy under direct sunlight. Fruit clusters ripen in locations found easily by birds, which are the main agents of grapevine seed dispersal. Our first goal in farming is to confine this rapidly growing plant into manageable rows and at reasonable heights for harvesting. Our second goal is to redirect the grapevine’s propensity for vegetative growth, meaning that we manage the vine to shift its natural balance from shoots and leaves to fruit (reproductive) growth. The final goal is to produce as much fruit as possible that meets market standards for fruit quality.

Managing the canopy for fruit quality

Winegrapes are grown commercially in a fairly broad range of temperate climates, and the crop’s high value motivates growers to test geographic limits. There are breeding efforts to extend the margins of grape production, but for the most part, the standard approach has been intensive horticultural management to rectify the differences between climate and site, and vine biology and desired fruit quality. Let’s assume a given vineyard site (soil, topography) in a given climate, where the choice of cultivar (also clone and rootstock) sets a genetic potential for a certain type or quality of fruit. Thereafter, yield and quality depend upon an array of horticultural practices that we can place into broad categories of water, nutrients, and trellis-training systems. Trellises are fairly fixed, unless the grower invests in retrofitting. On a given trellis, there is some latitude in training the vines, what is referred to as “canopy management.” To some extent, vegetative growth can be restricted through soil fertility, but there is a lag between fertilizer application, and nutrient uptake and utilization by the plant.

In humid, rain-fed areas or in those regions where irrigation is controlled by law (for example, the European Union), vineyards can be subjected to large inter-annual variation in soil water; consequently, vegetative growth and fruit quality either are inconsistent or the grower must invest in costly management interventions in some years. By contrast, growers in semi-arid or arid regions use irrigation as one of their most powerful tools in the annual struggle to control vine growth and maximize fruit quality. Grapevine growth is highly responsive to water. In fact, researchers in the 1960s used the analogy of a water-filled pipe to describe the rapid movement of water up a vine trunk. If vine growth responds rapidly to available water, then the opposite must be true: restricting soil water restricts vegetative growth. This principle is practiced widely in wine grapes, especially red varieties, using “regulated deficit irrigation” to control when and to what extent the vine’s water supply will be limited. Water deficit indirectly influences fruit quality by restricting vegetative growth, which in turn allows more solar radiation to penetrate the canopy and strike the fruit. More directly, water deficit leads to smaller berries, earlier sugar maturity, and changes in phenolics that are closely linked to fruit quality. 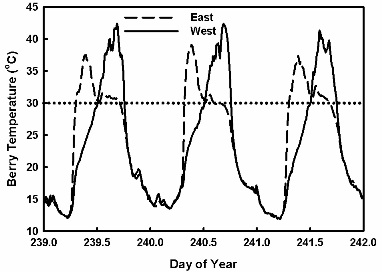 Fig. 1. Grape berry skin temperature (ºC) for a cluster on the east side of a vine and one on the west side of the same vine. Dotted reference line approximates air temperature during afternoon, when west-facing clusters were exposed to direct solar radiation.

The temperature of the grape berry or cluster is dominated during the day by solar radiation, or the intensity of sunlight reaching the fruit. Some heat can be gained or dissipated by convection as warm or cool air passes over the berry. A small amount of evaporative cooling occurs when berries are green and can transpire like leaves, but the berry has fewer stomates than do leaves. The berry stomata are essentially non-functional during ripening. Berry temperature can exceed air temperature by as much as 18ºF to 27ºF when berries are exposed to direct solar radiation in mid-summer (Figure 1). The more intense the solar radiation and the less that air moves through the canopy and across the fruit, the higher the average berry temperature. Berries shaded by at least two or three leaf layers rarely exceed air temperature by more than about 2ºF. This is because during midday, solar radiation at such shaded fruit may be only 5 to 10 percent of the ambient value (Figure 2), thus the radiation-caused heat load is small. Rates of plant metabolism, including that in grape berries, are highly dependent upon temperature. It is important to be aware that because of solar radiation and air movement, berry temperature may be quite different from the air temperature reported at the nearest weather station. 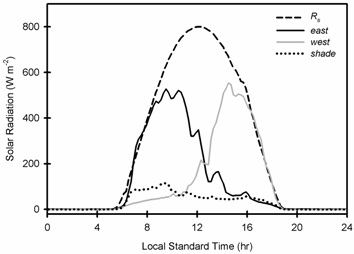 Fig. 2. Total solar radiation (Rs; in watts per m2 flat surface) and radiation striking grape clusters on the east and west sides of the vine, and on those in the shade, over one day during fruit ripening. Skies were clear.

The dependence of fruit maturity attributes (e.g., total soluble solids, organic acids) on temperature has been documented for a long time (at least since the 1890s), in progressively finer detail by cultivar and climate. Solar radiation influences the common fruit maturity attributes indirectly by driving berry temperature. Under lower temperatures, berries accumulate sugar more slowly, and thus ripen later; likewise, acids are metabolized more slowly, so berries retain higher concentrations of organic acids as one approaches harvest. The inverse is true under higher temperatures, up to various biochemical thresholds that limit metabolism, often described colloquially as “the vine shuts down.”

Phenolics are plant secondary metabolites; they are made from the building blocks produced by photosynthesis (primary metabolites). Phenolics are responsible for major sensory properties in plant-derived food and beverages, including grapes and wine. In grapes, there are three main groups of interest: flavonols, anthocyanins, and flavanols (or condensed tannins, not to be confused with oak-barrel tannins). The biophysical role of flavonols is absorption of UV radiation; they also impart anti-microbial properties in response to wounding. In the vineyard, their synthesis is promoted by exposure of the berries to solar radiation. Flavonols accumulate in the skin at any time during berry development, similar to other fruit crops. Anthocyanins form during fruit ripening, coinciding with seed maturation. These pigments impart dark color (red, purple, black) to berry skins and thus, to red wine. In wine, anthocyanins form complexes with condensed tannins and other co-factors (like flavonols) that contribute to color stability in the bottle. Although grape anthocyanins will form in the absence of light, it has been long observed that berries exposed to solar radiation during ripening will accumulate higher concentrations of anthocyanins, barring high temperature extremes. The most significant sensory consequence of condensed tannins is that they impart astringency to grapes and wine. After grapes are crushed, condensed tannins undergo numerous reactions and their perceived astringency is altered. Condensed tannins are found in seeds and skin of grapes; there are high concentrations in flowers and newly-formed berries, although the timing of maximum tannin concentration in developing fruit may be dependent on environment, specifically temperature. There remains vivid debate in the scientific community on that point. Much of the uncertainty may be attributed to climate, to fruit developmental stage when sampled, and to the different extraction and analytical methods used. High concentrations of condensed tannin in young berries are beneficial biologically because bitter, astringent fruit is unpalatable to herbivores. The plant must deter seed dispersal by animals until the seeds are mature, which occurs in conjunction with rapid accumulation of sugars in the berry pulp during ripening. The measurable decrease in condensed tannin during berry development is understood to be partly due to these compounds being bound in cell walls and to transformation in chemical structure, which renders them less extractable in the lab or during fermentation.

There is also uncertainty about the composition of an optimal phenolic profile. It is known that some phenolics either require light to be synthesized, or that the fruit accumulates higher concentrations of these compounds in the presence of light. However, it often is unclear whether the resulting phenolic accumulation was due to light itself or to a combination of that and the daytime radiation load driving berry temperature. In the last decade, these two effects have been separated in field experiments. What we learned is that consistent with the scientific literature and our biological understanding: flavonol accumulation was apparently insensitive to temperature but responsive to solar radiation, specifically UV. When we controlled solar radiation, anthocyanins in the berry skins decreased as berry temperatures rose. When we controlled berry temperature, shaded fruit developed less anthocyanin than did sunlit fruit. The concentration of the most abundant anthocyanin in the trial cultivar (Merlot) did not change significantly with temperature, but the other anthocyanins decreased as temperature rose. Perhaps not surprisingly, acylated anthocyanins, which are thought to be heat-stable during processing, represented a higher proportion of the total anthocyanin pool as berry temperatures rose. During the several weeks of ripening, short periods of extreme high temperature, for example, as little as 10 to 26 hours above 104ºF, were detrimental to anthocyanin accumulation. Condensed tannin profiles were not straightforward. For fruit sampled at the onset of ripening, tannin concentrations were higher with higher antecedent temperatures. Shorter polymers were more likely if we decreased the difference between day and night temperature. However, neither of these outcomes was true at harvest. When fruit temperature was controlled only during ripening, there was no apparent effect at harvest on the concentration of condensed tannins or on their profiles, in either skins or seeds.

The grape grower’s challenge in biological terms is to configure the vine canopy to maximize solar radiation interception for photosynthesis and to create an ‘optimum’ fruit microclimate for ripening. The term ‘optimum’ is ambiguous, but we can perhaps state universally that growers manage the canopy to avoid extremes of solar radiation and temperature that would compromise the synthesis or accumulation of maturity- and quality-associated compounds in the fruit.