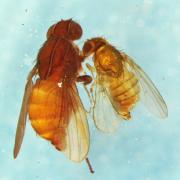 A Drosophilid, Zaprionus indianus (Gupta), commonly known as the African fig fly (AFF), has become established as an important pest of commercial fruit production in tropical areas of the Americas (Vilela, 1999).  Valuable crops including figs and longans have been impacted from Brazil to Panama, and AFF has been collected from a variety of hosts in Florida as early as 2005 (van der Linde et al., 2006).  Currently, AFF has been reported from the southern, western, mid-western, and eastern United States (van der Linde 2006).  It moves in fruit shipments and readily colonizes new areas (Commar et al. 2012).  In Brazil, AFF changed its behavior after colonization and started attacking unripe figs, causing about 40% of the fig crop to be lost (Commar et al. 2012). Its impact on the grape industry is not yet known, but it is a potentially destructive fly.

A native of tropical regions in Africa, AFF measures approximately 3.5 mm, with a very striking pair of white stripes that extend dorsally from the antennae to the tip of the thorax.  Two shorter stripes extend laterally across the post-pronotum to the wing base.  On the head, these white stripes are bordered medially by black stripes and laterally by the distinctive red eyes, while the thoracic stripes are bordered on either side by the black.  These stripes contrast strongly with the otherwise yellow-orange body, making for a rather attractive little fly.

Biological research conducted on AFF has shown they can survive an average of 82 (male) to 93 (female) days, with number of offspring averaging 58 per female (Setta and Carrereto, 2005).  In the same study, development time was approximately 19 days from egg to adult.  It is likely that these flies are capable of producing numerous generations in a season in some areas of the country.

Research conducted in Florida has shown that AFF can be reared from over a dozen fruiting plant species, but in most cases the infested fruits were collected from the ground or were otherwise damaged (Steck, 2005).  A wide host range indicates that it may be able to survive on numerous wild hosts.  AFF has even been collected in a National Forest far from any commercial fruit production (van der Linde et al., 2006), thus indicating that eradication of this fly is unlikely.

While direct damage from AFF to grapes may not become commonplace, spotted wing drosophila (SWD) along with other primary insect pests will provide the opportunity for AFF to thrive in vineyards, and possibly into post-harvest handling facilities.  As with most insect pests, monitoring will be vital to the successful control program, and AFF is readily collected with the same apple cider vinegar traps that have been effective with SWD.  Once detection occurs, preventative insecticidal sprays should be applied.  As always, please check with your local County Agent and refer to product labels for correct usage.  Additional cultural controls can be utilized, including the removal of wild native fruiting hosts.  If sanitation is practical, removal of berries from the ground may further prevent AFF from establishing significant populations in the vineyard.