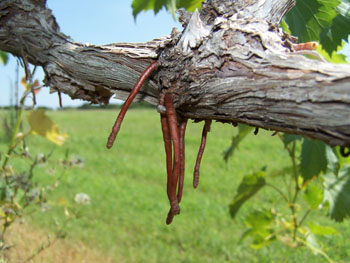 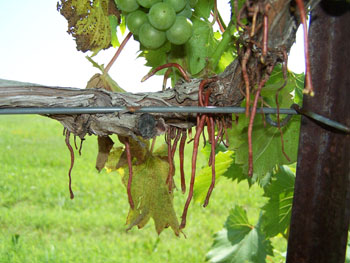 Aerial root formation in Vitis has been documented on different grape species; however, the driving forces behind the formation of adventitious roots are not well understood. In tropical areas and greenhouse situations, aerial roots in the grape family (Vitaceae) are common. In these regions, roots that form adventitiously on aerial portions of the vine may provide an adaptive response mechanism to avoid drought or flooding or provide other unknown functions. In temperate regions, freeze injury is the most likely initiator of aerial roots, as de Klerk et al. (1999) stated that some wounding is generally necessary to induce rooting. Aerial root formation on winegrapes in the eastern U.S. is not an unknown phenomenon, but the effect of the rooting on the vine has not been studied. Freeze injury has often been associated with aerial roots in temperate vineyard locations (Takeda et al., 1982; Clark, 2001); although, environmental conditions that follow the freeze event also may play a role.

Records of aerial root formation in Vitis vinifera specifically are scarce, although V. vinifera is generally thought to produce adventitious roots easily. Lindley (1855) and Meehan (1891) also stated it was not unusual for European grapes to produce aerial roots under moist field and hothouse conditions, respectively. With so little documentation of aerial rooting, one may conclude that the roots have no function and have no subsequent effect on the vine after they are produced. However, at least one author (Lindley, 1855) believed that vines that produced aerial roots also produced “bad grapes” and had “poor cane development”.

Overall, aerial root production, although uncommon in the temperate zone, is not an unknown phenomenon in regions where freeze injury occurs and wet, humid growing conditions exist. Subsequent effect of aerial roots on the vine has not been shown conclusively to be detrimental.

Meehan, T. 1891. Contributions to the life-histories of plants. No. VI. Proceedings of the Academy of Natural Sciences of Philadelphia 43:269-283.